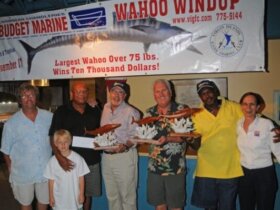 The Atlantic Blue Marlin that is also known as the Makaira Nigricans is the largest and most widely distributed member of the billfish family. Since the early days of game fishing, inspired anglers have traveled to all parts of the globe in search of reeling in a 1000 lbs plus fish, better known in fishing circles as a “grander”.

The dream of every angler, myself included is to be the lucky one sitting in the fighting chair as a “grander” pulls out all the tricks in the book to free itself. Known for their spectacular fighting capabilities, these beasts can leap through the air one minute and on deep, sounding turns the next.

No other species of fish creates more excitement than a Marlin. These fish are important to any country that is interested in luring game fishermen to spend their time chasing that dream of landing a grander. The Atlantic Blue Marlin has created industries worldwide of boat builders, marinas, bait catching fisher folk, tackle manufacturing and rigging shops, magazine publishers, video producers, hotels and guest houses, taxi services, caterers, travel agencies, airlines, photographers, fishing apparel and polarized sun glasses manufacturers and retail stores. The list of businesses that rely on these fish go on and on and the dollars that follow them amount to millions of dollars annually and employ hundreds of thousands of persons worldwide.

In years gone by, it has always been known to these globetrotting fishermen that the top areas to catch blue marlin are Hawaii, Mexico, Australia, East Africa, Madeira, Panama and the Azores. In recent years, there are new destinations being added to this prestigious list of hot spots as big fish are caught in new locations. Tobago is one of those recently added destinations.

The year is two thousand and thirteen and the destination is Tobago, which is one of two islands that make up the twin island state of Trinidad and Tobago. The day is May 12, which is the third and final day of the 2013 Tobago Game Fishing Tournament in Charloteville. The boat is “PREDATOR” based in Trinidad. The Captain is twenty seven year old Brendan Farfan. The crewmembers are twenty four year old Peter Reid, twenty six year old Michael Rostant, fourteen year old, Simon Bernard and twenty-one-year-old Brendan Bernard. All the crewmembers are from Trinidad and Tobago.

The “PREDATOR” Captain and crew knew early in the three plus hours of this fight that this fish was deserving of far more respect than any other they had fought in the past. Saltwater game fishing is a team sport that requires concentration, strategy and a lot of communication between team members. It also can be argued that it requires a lot of experience to reel in a catch of this size. This team had far less experience in handling the elements of the battleground than did their opponent. This catch was super fast and super tough and was not going to give up without a super fight. For this battle to be won it required super tackle and not to mention a super angler backed up by a super team.

Brendan Bernard was the super angler that sat in the fighting chair of “PREDATOR”. That was when the battle began between him and the 1005.9 lbs Atlantic Blue Marlin that had made her way into the fishing spread of “PREDATOR” which was made up of eight lines with three teasers. Brendan had his own bag of tricks by his side and was ready to bring them out one by one as the hours rolled by.

The scene of the battleground is set at a fishing hot spot called “corner pocket” that is about eight miles off Tobago’s west coast. Captain Brendan Farfan calls in the hook up to tournament control VHF radio host, Della De Silva and she registers it in her log at 9:09am, however in all the excitement the call to Della was approximately a half an hour after the initial hook up. The Penn 80lb international single speed reel starts to scream and is given the greatest test of its life. The late Christopher Bentley, who was a senior member of the crew purchased this reel more than twenty years ago!

There are two particular times when fish of this size can be lost: at the time of the hook-up and the first run, then when the fish comes alongside the boat and the crew are readying themselves to land the fish. Team “PREDATOR” was not without challenges in ensuring that this prized catch was not lost.

When attempting to bring the fish to the boat the flying gaff (A large stainless steel hook that dismounts from a long pole with a rope attached that is used to land large fish) broke on the third attempt. In addition, Crewmember Peter Reid damaged his right arm while performing the role of leader man (He tore several ligaments in his forearm and had to be treated by medical staff when he got back to land).

They were quickly on the VHF radio requesting help from the other competing boats for a replacement gaff and team “DOUBLE DUTCH” was the first on the scene, however their eight inch flying gaff was too small. Team “SEA HI” came along and they were very happy to part with theirs. By this time the boats all around knew that this was going to be a very large catch. They were right, but not many would have thought that a “grander” was what was lying on the cockpit deck of “PREDATOR” after the fifth and final attempt to bring the fish on board at twenty-three minutes after eleven o’clock.

I had called Captain Gerard “Frothy” De Silva the day after the record catch to thank him for having my son, Christian as a member of his crew and he took the opportunity to express his excitement over the news of the record breaking fish.

De Silva was on board his boat, “HARD PLAY 2” when he heard Captain Brendan Farfan on the VHF radio indicating to tournament control that the fish was looking to be around thirteen to fifteen feet in length. It was difficult for the crew to estimate as the fish could not fit through the transom door and was left in the water while they made their way back to the weigh station.

The catch was weighed three times on two scales positioned on the Charlotteville jetty in front of a very large crowd that had gathered from the nearby villages on the northwestern part of the island. Both scales are manufactured by IWS and are International Game Fishing Association (IGFA) approved. The Fisheries Division of the Ministry of Marine Affairs of Trinidad and Tobago was on hand to document the big catch along with all the other fish that made it to the scale during the three-day tournament. Captain Gerard “Frothy” De Silva, who is also the founder of the Tobago International Game Fishing Tournament, said that for the last eighteen years of the TIGFT and the Trinidad and Tobago Game Fishing Association’s (TTGFA) Marlin Madness tournament many anglers have claimed to have hooked up what they thought were “granders”. None were lucky enough to prove that they were correct.

Some have come pretty close to hauling in the prized catch. Three Blue Marlins have topped the eight hundred pounds including this year’s catch in the last five years in Tobago. Fifteen-year-old Sean Mendonca caught the first in 2008 in the TTGFA Marlin Madness tournament. His eight hundred and ninety pound (890lbs) catch is still the IGFA Atlantic Blue Marlin Junior Angler World Record.

While I am on the subject of records, the 2013 catch is now the record for the Southern Caribbean Billfish Circuit (SCBC), which includes Trinidad and Tobago, Barbados, Grenada, St. Lucia and Martinique.

De Silva feels that now that there is proof that these big catches exist in Tobago waters, it will do much to promote Tobago as one of those destinations that game fishermen will want to visit. Both committees (TIGFT and TTGFA) have been praised in the past for the concerted effort that they make in educating game fishermen on the importance of releasing their catch.

Captain De Silva went on to say that the game fishermen are the “soldiers of the ocean” and are always the first to bring issues that threaten the seas to the public’s attention. It is always a bittersweet moment when someone from the game fishing community brings a large catch to the scale. He continued “this is not the norm as more than seventy-nine Blue Marlins and forty-one Sailfish have been released in the last five years alone in the TIGFT tournaments alone. There have also been a handful of White Marlins and long bill Spearfish releases”.

A socio economic impact survey was conducted during the tournament by the local authorities to determine the benefits to be derived by these tournaments. There were eighteen boats this year but on average, there are twenty-eight boats taking part each year. Many of the anglers stay in cottages and apartments in the village and buy food, drinks, ice, bait etc. during their time there. The Tobago House of Assembly (THA) was very impressed at the turnout and the inclusion of persons living in the area to the events that accompanied the tournament.

I sat down to interview some members of team “PREDATOR” at the Trinidad and Tobago Yacht Club on their return from Tobago. At no point in time during the interview did I get the impression that they fully understood the impact that this one fish can make to the fishing village that hosted the tournament or for that matter the island of Tobago in general. They were far too consumed in reminiscing that magical moment that will be etched in their young memories forever. The happy listeners won’t doubt their stories in years to come because unlike most of us the big one did not get away from them!