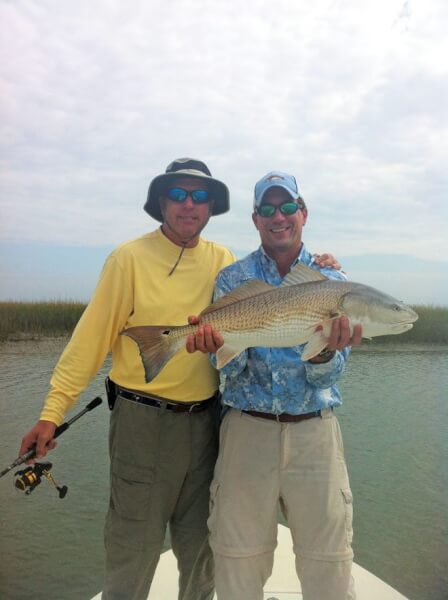 Alicia Parsons is the Executive Director of the South Carolina Chapter of the Cystic Fibrosis Foundation (CFF), and organizes the annual Red*Trout tournament, which takes place in late October each year at the Charleston Harbor Marina. In 2013, 31 boats helped to raise just over $100K, and the twelve-year fundraising total is now more than one million dollars.

Celebrity anglers like Blair Wiggins of Addictive Fishing TV and Mark Nichols of DOA Lures came to Charleston to volunteer their time and talents, and of course to go fishing. Local anglers are glad to pay an entry fee that benefits CFF and help raise awareness for the disease.

The two-day fishing tournament tracked the release of redfish and trout only, using a points scale for all eligible fish. For instance, a redfish caught on fly fishing equipment carried more points than a redfish caught on spinning tackle. At the end of the tourney, awards were given for best two-man team, as well as individual awards like largest trout or redfish released.

Finishing at the top of the heap for recreational anglers were the father and son team of Ron and Steve Silverman, who also won in 2008. They support the Red*Trout each year, as they have a family member affected by cystic fibrosis. In fact, many of the participants share a connection to the disease that inspires them to come together each year to give back to the community.

Local charter Captain Ben Alderman won the top guide award in the 2013 tourney, but all of the charter captains make sacrifices to try and “catch a cure”. The weather was warm and overcast over the weekend, but the captains came out to support CFF rather than booking any tours.

The bite was strong and the largest redfish release was 42.5 inches, caught by Will Spievogel. The largest trout release was 22 inches, caught by Steve Wright. Winning the fly-fishing division was father and son team of Mike Able Sr. and Mike Able Jr. of Haddrell’s Point tackle shop. The top Lady Angler was Kristin Le Seta, who herself has cystic fibrosis. The winning celebrity angler was Blair Wiggins, the MOGAN man who racked up multiple redfish releases using DOA Lures.