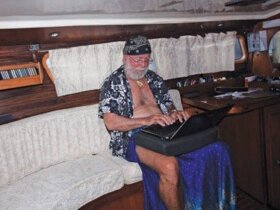 Earning to Sail, Sailing to Earn 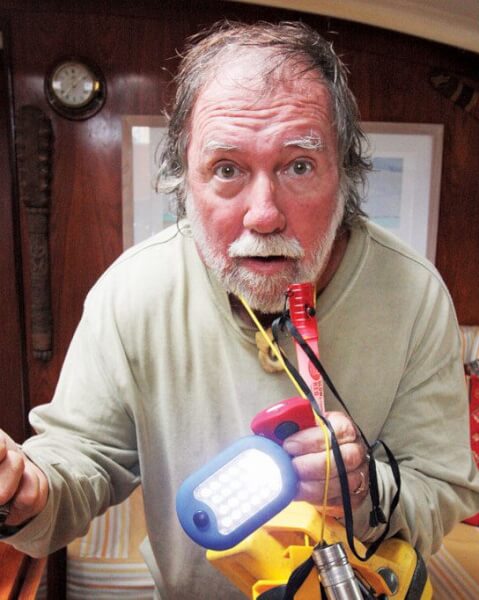 Boats eat things—that’s the only explanation. Example: I have purchased over 5,000 flashlights in my 53 years of living aboard, and only tossed out three. That leaves 4,997 flashlights which should be kicking around my bilges—and ain’t. Nor is it just me. This happens to the fairer sex, too. For instance, my wife lost her virginity aboard.

Sadly, there is no ‘Lost and Found’ afloat. My hair was misplaced a few years back—and we never recovered that either. Ditto, moral integrity. Honesty. Commonsense. My ability to see my toes …

Seriously, it is bad enough that boats eat all our money—devouring our personal belongings seems a step too far. Plus, the teefing seems selective in a cruel way. Sure, I have tons of personal photos of myself looking ugly … and stoned … and drunk, but what about that wonderful fifteen minutes of handsomeness I experienced on February 30th 1968? Why are there no pictures of that on Facebook?  Could my vessel be devouring my photos with malicious intent? With editorial vengeance? With generational envy?

Speaking of generational envy, why can’t the younger generation worship their own acid-addled leaders? Why must they attempt to hijack ours? I mean, leave the Beatles alone, okay? I, personally, think that no one younger than, say, 50 years of age, should be allowed into a Rolling Stones concert. Ha!

That’s right—get your own philosophers! Or use Plato! But leave the Heavies of Hippy Thought for us baby-boomers! That’s right: my generation has certain ‘moral compasses’ which should not be digi-defiled. For instance, Jimi Hendricks on How to Live Healthy, and Janice Joplin on Longevity, and Jim Morrison on Playing Nice with Others.

Another thing I’ve lost aboard are books. That’s right, ever since Mister Kindle came aboard … bye-bye print!

This has its drawbacks. A few years ago, while crossing the Pacific, we ran out of TP. This wasn’t such a big deal—I just put a few copies of Reader’s Digest in the head, and no problem! (True, once while cruising Mexico we suffered from Montezuma’s Revenge … thank gosh we had a hard copy of the congressional record!”

Kindles are useless for such things—regardless of how fully charged their battery.

Actually, as an offshore sailor, I hate this degrading ‘digitalization’ of my vessel’s bridge. Plus, it is so easy to get all the acronyms confused. Recently, I fell overboard—and my wife screamed “S.O.B.” instead of M.O.B … what an airhead!

But, since I was a tad worried about drowning, I didn’t point this out to her. “Throw me a PFD!” I screamed instead.

She immediately dashed below, rushed back on deck, and Frisbeed me a data disk which contained a step-by-step USCG PDF file on ManOverBoard drills.

This had little buoyancy, alas.

Which brings us to the sexism inherent in the MOB acronym. Are female sailors so undervalued that you’re not supposed to go back for ‘em? I mean, that’s harsh! Would it cost Garmin too much to have a LOB button? (LadyOverBoard.)

All sailors, especially older ones, have lost a halyard. I was going to yell at my wife for doing this—when I lost my train of thought. By the time I’d gotten my harsh criticism back on track—she’d ‘clean forgotten’ what she’d done.

…damn! (Actually, that reminds me of the acronym for Mothers Against Dyslexia.)

… seriously, being a live-aboard sailor in mid-Pacific with Alzheimer’s disease ain’t so bad, as there’s far less chance of wandering away. As a writer, “Al’s Disease” is VERY labor saving as I’m able to repeatedly mail off the yellowed Cruising World article about my mother TO my mother once a month—and surprise her each time! (She’s blind now, which makes it SO much easier to steal money outta her purse!)

It isn’t only long term sailors who have lost stuff—bareboaters seem to lose the ability to anchor only hours after being instructed on how to do so.

Have you even noticed how HUGE the wakes are of your average Police Boat? Perhaps their skippers have lost the ability to look behind their craft. They must be intentionally designed this way—to squat, wallow, and act so piggish. (The boats, not the drivers!)

Of course, teachers aren’t the only ones who get those ‘I lost my homework’ type excuses. Once, my observant wife happened to be watching me as I got undressed for bed, and asked, “Fatty, what happened to your underwear? I’m sure you were wearing underwear when you set off to work this morning.”

It wasn’t my finest hour. “I was robbed!” I blurted, stupidly.

Time marches on, of course. All of us age. My eyesight is going. I’m losing vision. Proof: my own wife is starting to look good to me again.

Yes, having a faulty memory can be good for your cruising career. For example, the reason my wife and I keep circumnavigating is … because we can’t remember to pay our bills—or even who we owe them to. After all, we’re so busy spending our/their money that it seems counterproductive to worry about repaying it.

Plus, if you pay some people back and you don’t pay back others … it gets complicated to keep track of. How much simpler to just resist the temptation to return the money, despite how much the starving widow might need the funds. (Somehow, when Wall Street crashed, I evidently lost my compassion too!)

Perhaps it is best to use a concrete example. I recently purchased a Rule 2000 bilge pump. The reason the pump is called this is because, in most marine installations, it pumps 500 gallons an hour.

The marine supply stores (also called ‘chandleries’ if they automatically quadruple the price) sell a five dollar switch on a five cent faceplate for $76.45.

Since I’m neither wealthy nor stupid, I declined. Instead, I purchased an “off-on-on” Push/Pull/Pull switch to control said pump. It was a mere $12.97 at Marine Depot on Tortola. Yippee!

I immediately brought it back to my vessel, and—knowing that boats regularly eat things—stowed it in my ‘future projects’ drawer which is specifically set aside for that purpose.

I then dashed for my electric drill, selected the appropriate drill bit … and by the time I got back … the boat had eaten the switch!

“Perhaps you put it with the dive gear,” my wife said helpfully.

Okay. I’m gonna be a little bit more honest than most husbands and/or most writers. One of the primary reasons homo saps (I think that’s the science name for our species, right?) get married is to blame their spouses for their own short comings. Thus, I exploded at my cringing wife: “Carolyn, do you think I’m an idiot?”

Before she could formulate a long and complicated answer, I rushed on with, “I put it right here in the future projects locker, and the boat ate it!”

“Boats don’t eat things, Fatty,” my wife said contritely. “I mean, not metal things. Paper, wood … yeah, perhaps. But not brass and stainless steel. Not switches. You misplaced it.”

Frankly, this pisses me off to no end. I mean, people believe the weirdest stuff: Easter Bunny, Santa Claus, JC … that the earth was built in seven days—so why-in-hell is believing that boats eat things such an intellectual stretch?

Am I right or am I right? People are delusional nuts! Lots of ‘em! Tons of ‘em! The LAA (Lipton Addicts of America) political party believes that the earth is flat and all black Americans have faked their birth certificates … and, yet, they collectively balk at the possibility of a boat nibbling on a switch?

Strangely enough, these very same folks are beginning to convince me that Charles Darwin was wrong, either that or all the tea they sip inhibits evolution, because they are rapidly descending back towards their ape ancestors!

I was recently in my vessel’s tool room—which is tiny. My feet never moved. I was soldering on some battery lugs when I lost my large, expensive roll of electrical solder. Actually, that’s not correct: when my solder was eaten by my vessel!

That’s the only explanation that makes sense.

For a decade or two, I could not convince my wife of this simple, undeniable fact. Then, one day, she was $50 short on the grocery money. I was about to go ballistic on her when she said softly, “…the boat ate it.”

“Ah, HA!” I said screamed in joyful vindication. “You admit it!”

“I do,” she said, and winced. (She seldom utters this specific phrase—as she believes those two words ruined her life.)

“Boats have eaten a lot of my things,” she admitted. “For instance—back in the day—my youth. Currently, all my free-time …”

“… when I look at a gleaming yacht,” she continued, “I don’t see varnish, I see a life sentence!”

I hugged her, kissed her, and then whispered gently into her ear. “It’s okay, honey. It’s okay. Time can steal it all—as long as it leaves our sense of humor for last.”

Editor’s note: Fatty and Carolyn are currently touring east coast yacht clubs, each attempting to convince their members the other is nuts!

Cap’n Fatty Goodlander has lived aboard for 53 of his 60 years, and has circumnavigated twice. He is the author of Chasing the Horizon and numerous other marine books. His latest, Buy, Outfit, and Sail is out now. Visit: fattygoodlander.com