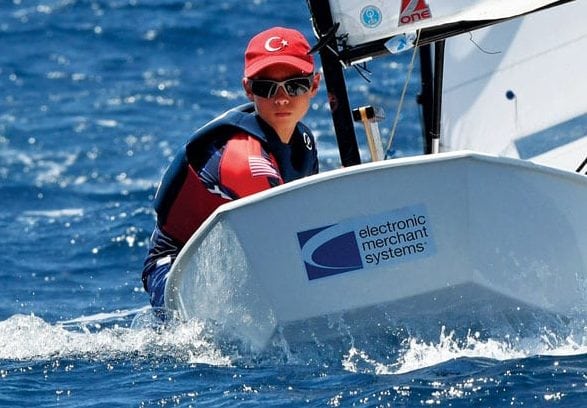 The Caribbean, with its
constant trade winds and balmy weather, is an ideal place to sail. But, what
the region lacks is a concentration of world-class sailing talent.
“Travel is important,” says Kevin Burnham, a gold
medallist in the Men’s 470 class
at the 2004 Summer Olympics in Athens,
who visited St. Thomas Yacht Club December 23 to give a motivational talk as a
fundraiser for the Antilles School Sailing Team. “Young sailors need to
expand their horizons, get out and travel, check other conditions and meet
other competitors.”

A native of Miami,
Florida, Burnham is a
professional sailor whose sailing experiences range from winning one-design
keelboat regattas, to breaking long distance records to winning Olympic Gold
Medals. Last year, Burnham and his teammate Paul Foerster
were recognized for their achievements at the Olympics by being named Rolex
Yachtsmen of the Year. Since the 2004, Burnham has entertained and spoken to a
wide variety of groups, including Fortune 500 companies, top executives,
schools, and yacht clubs.

In his
talk, Burnham offers many tips to up-and-coming sailors.

“Coaching is important. Someone who can short cut you and step you
up. That’s what I had early in my career, as a 16-year-old, and
it’s one reason I stuck with sailing rather than
continued to play tennis,” Burnham says.

Practice
makes perfect. “We raced heavily on the European circuit where there are
a lot of professionals. So, we would regularly leave the beach at 8 a.m. and
not return until 6 p.m., spending the whole day doing drills. Fellow sailors
here in the U.S. thought we were nuts, but it paid off.”

At the
Olympics, Burnham adds, “We were the first on the water, usually one hour
earlier than anyone else. We didn’t want any outside influences and
didn’t stick around in the morning shore side to listen to things like
weather reports. We wanted to do our own thing. We’d sail upwind and do a
full race before the rest of the fleet came out. We’d get our compass
settings down and an air of confidence.”

Confidence was gained quickly when Burnham and Foerster
won their first of 11 Olympic races. “Paul said at the time, ‘we
can’t win them all until we win the first one’,” Burnham
says.

Winning
all 11 races wasn’t in the cards though. “In one race we got 19th.
We got stuck having to do some 720s and the fleet passed us. At that point I
felt that the regatta was slipping away from us. Then a friend told us that if
you want something too much, you won’t get it. Just take things as they
come.”

Ultimately, Burnham and Foerster won the gold,
leaving the British and Japan
teams to take silver and bronze, respectively.

“I
tried for 30 years to win the Gold. What’s important is the
mindset,” Burnham says. “Stay the focus, keep training and keep
your mind on what you want. I can tell you that dreams do come true.”