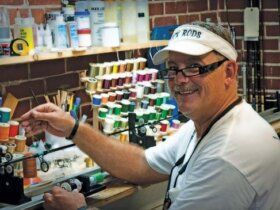 Fishing from a kayak is a fun and challenging endeavor. Look at any fishing kayak on the water today and you will see each is as unique as the person on it. Each is set up to make life a little easier and more comfortable with improvements enabling anglers to have an enjoyable day on the water while hauling in a trophy catch. There is no end of products to help fishermen, and there are countless ways to rig a kayak. In the myriad of evolving offerings there are a few products and trends that do stand out from the crowd.

With the advent and utilization of better waterproof cases (and regardless of cellular coverage) smartphones can become sophisticated electronics aboard, all in a compact package requiring no external power. Utilizing the internal GPS and stored data such as charts, smartphones can now become handheld chartplotters with apps such as Navionics’ Boating. With the free version you can navigate using downloaded NOAA charts which improve situational awareness while on your kayak. App upgrades such as auto routing are available, as are more sophisticated navigation data, route planning and Navionics’ high quality charts.

Now your smartphone is not limited to being just a chartplotter. There is a bevy of manufacturers supplying wireless sounder modules with apps that can turn your phone into a full functioning fishfinder and/or depth sounder. Sonar Phone from Vexilar marine electronics is one such product. It will also interface with the Navionics Boating app, giving you the feel of a chartplotter/fishfinder right on your phone.

Of the three different kinds of wireless transducer options, kayak fishermen will be most interested in the bobber transducer that transmits the depth signal via WiFi to the phone, resulting in a traditional-looking fishfinder display on your screen with on-screen touch controls and depth capabilities up to 120 feet. Deeper Fishfinder by Friday Lab  operates in a similar manner but transmits its signal via Bluetooth, and its castable or towable dual beam transducer (looking like a bobber Apple would manufacture) can be charged and will operate for a good day’s worth of fishing. Its range is about 160 feet transmitting via Bluetooth, and its depth range is around 130 feet.

If you are wondering how to carry your phone aboard the kayak, there are now multiple varieties of mounts available from manufacturers such as Ram Mounts. There is also a growing trend of track systems being included on many new fishing kayaks or that can be added after purchase. These track systems allow a great deal of flexibility with attachments ranging from cell phone brackets to navigation lights and from camera mounts to anchor systems.
I recently purchased just such a system to test one of the most unusual and innovative products I had seen at ICAST (the International Convention of Allied Sportfishing Trades) this past summer.

The Flexstick Anchor  solves issues found with other anchor systems. This unique anchor is made up of a fiberglass pole similar to those used to anchor small skiffs and bay boats. But unlike those that need to be removed and stored when not in use or stored in an upright position, the Flexstick Anchor is attached to a special swivel assembly clamped to a gunnel-mounted rail. The swivel pivots the pole to a horizontal position along the hull when not in use. There is no obstruction sticking up waiting to snag fishing lines, and no mud or line tangles on deck. The anchor easily deploys by simply releasing the swivel with your thumb and pressing firmly down on the pole. At the end of the pole there is a star attachment that helps dig into and grip the bottom using the tension of the curve in the pole. When deployed in a strong wind, the anchor faced me in the optimum position and held fast. Even in a heavy current and strong wind it was easy to release and never got in my way while I was drift fishing. I was able to deploy and release it with one hand. The only downside is that it will not work in deeper water. There are also other mount options available if a track system is not right for your kayak.

As kayak fishing becomes more popular, more and more accessories will become available. Before you know it, the fish will be finding you.