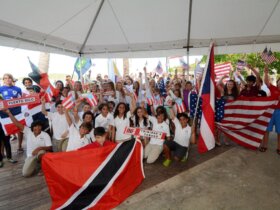 Born in September 1993, Barnes got her racing start six months before, accompanying her mother in utero out on a spectator boat for the International Rolex Regatta. She took her first swim lesson at age three weeks and kayaked at age four months, albeit in her mother’s front pack.

Barnes started sailing in the junior program at the St. Thomas Yacht Club (STYC) at age nine. “I saw my brother Rian sailing and it made me want to try. I wanted to be able to beat him.”  Sailing lessons in the Optimist dinghy turned into a weekly highlight.

“My friends and I would sail around the buoys on Friday nights and see who could beat who,” she says.  Columbus Day weekend in 2003 marked Barnes’ first regatta.

“I got second in the Green Fleet and was so happy,” she says. “I thought, ‘I’m going to get first next year.’”

“One of my first memories of sailing in a regatta was heading out from the beach and straight into a squall,” Barnes tells. “I looked behind me and my best friend wasn’t there; she headed back in. I continued out with everyone else. It was fun. That’s when I discovered I really liked racing.”

Her first major regatta was the 2005 Optimist North American Championships in Tobago.

“I was scared out of my mind,” she says. “I had no idea then that I’d get to where I was today. But I hung in there. I didn’t want to quit. In the end, I finished every race and beat 20 other kids.”

What really led Barnes to the next level, she says, was a series of clinics and training sessions held on St. Thomas and Puerto Rico, as well as coaching by Agustin ‘Argy’ Resano.

“Argy really helped us fine-tune the skills we had,” she says, about being a member of the Virgin Islands Optimist Dinghy Association sailing team. “First, he made us stronger. We ran like crazy and he built hiking benches so we could strengthen our stomach muscles. Then, he filmed us sailing. We’d watch the videos, look for our weaknesses, and strategize how to improve. Out on the water, we worked on boat speed. Argy would come up behind us and suggest trying something or he’d ask us what we thought and we’d try to figure out how to fix it ourselves. If not, he helped us.”

Barnes first big success on a large scale was at the 2006 U.S. Optimist National Championships, held in Sarasota, Florida. “I was really homesick, but I stuck it out.”  She finished 22nd out of 350 sailors, ninth in the 10- and 11-year-old Blue Fleet and Second Best Girl.

Along the way, Barnes progressively improved. Score highlights include 11th overall and Top North American Girl in Mexico, 15th overall and 2nd Best Girl in Peru, and 35th overall and 7th Best Girl in Turkey. The VI Optimist Dinghy Team, of which Barnes is a member, helped to put the Caribbean on the map in the area of Team Racing, too, scoring top three finishes in several international regattas.

“It’s fun to travel,” Barnes says. “The only hard part is security. We always had to explain that we had sails and spars in our tubes, not weapons.”  At each destination, Resano coached the kids through a set plan to acclimate them to the area.

Barnes explains, “We’d first look at the wind information on the Internet, Windguru or Weatherunderground. Then, we’d go out before the racing started and look at the winds over the course. Then on the course, we’d look at the angle of the committee boat to tell the current. Then, we’d test the wind patterns and see where the slow patches were. This made us really prepared by the time the starting horn blew.”

What has sailing taught Barnes?

“In a way, survival,” she says. “The thinking is like playing chess. You need to make quick decisions. I guess you could say sailing is the physical counterpart of chess.”  She also enjoys the competitive nature of the sport.  “In real life, people yell at you for being too competitive,” Barnes says, “But in sailing, they like it.”

Barnes’ suggestions for younger sailors?  “Never give up even if you want to,” she says. “In the end, if you don’t, the results will show.”

She adds, “If you’re a girl, don’t just think about being top girl at a regatta. Realize that you can beat the boys and win the whole regatta if you put your mind to it. Also, understand that there’s nothing special to being a girl. You’re a sailor.”