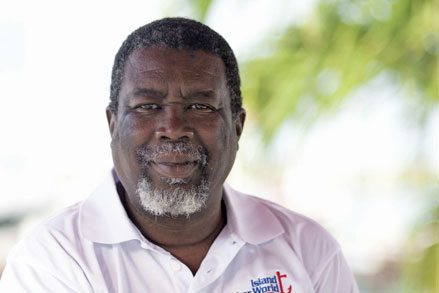 As Island Waster World prepares to celebrate its 50th anniversary in March it will also be honoring Mr. Clifton Wilson who will have spent nearly 45 years working for the company.

Affectionately known as ‘Cliffy’, Mr. Wilson joined Island Water World in 1972 when the premises in Cole Bay, St. Maarten, had just been built. He was employed as the bookkeeper and oversaw a rather ‘diversified’ marine business. Island Water World focused on the local fisherman, selling a lot of small Seagull, Evinrude and Johnson outboard motors. Fishing tackle was also available along with a small assortment of paint and resin.

“If there were ten suppliers it was a lot,” Clifton recalls. At this time Island Water World also had a small store in Philipsburg, outside the Court House, which specialized in Sunfish boat rentals – but was not beyond selling wooden Dutch clogs and Dutch windmill bedside lamps.

From bookkeeping, Clifton progressed to buying, which at the time required letters being sent to suppliers – with up to three weeks’ delay in receiving an acknowledgement – only to find much on order was not available. “Things improved somewhat with the installation of a Telex machine at the telephone office in Philipsburg, but this required a weekly drive over the hill to place orders,” he says with a smile.

With advancements in technology Clifton was instrumental in computerizing the company in the late ’80s, and has presided over the company’s information technology ever since. A legacy he can be justifiably proud of as Island Water World now has a world-class retail information system and much of it can be credited to his efforts.

Gary Brownhttp://garyebrown.net
Gary E. Brown is the Editorial Director of All At Sea Caribbean. He is a presenter on Island 92, 91.9 FM, St. Maarten, and the author of the thriller/sailing adventure Caribbean High. For more information, visit: garyebrown.net
RELATED ARTICLES
Barbados