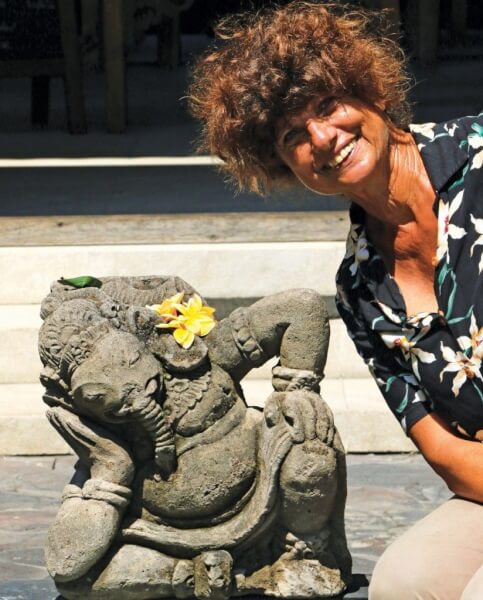 I am currently cruising Indonesia—and thus, being repeatedly quizzed on my religion. This always makes me a tad nervous. Circumnavigating requires many skills, and subtly changing the ‘topic of conversation’ is one of ‘em. I attempt, of course, to deflect such direct questions without answering in the specific. Who wants to say something awful and/or life-threatening by blurting out, “I’m for the J-guy,” or the M-guy or the B-guy.

Teams sports were never my thing.

…yeah, I’m talk’n ‘bout THE Confucius—who was a famous wise-guy even before Robert DeNiro and Joe Pesci.

Since my boat is named Ganesh, everyone in Bali thought I was a Hindu—until I informed them that I couldn’t even keep up with one god, let alone thousands of ‘em!

I must admit—as a storyteller with a vast appreciation for the sensational—I’m in awe of the Hindu gods. Shiva has eight hands of destruction—and is meaner than most women I’ve dated. Hanuman is the monkey God of the Wind—and sends us sailors winds that are too light, too strong, or completely adverse. (Are there any other kinds?) And Ganesh is the God of Lost Causes—designed precisely for people like me to pray to when we want to get a job, earn some respect, or appear sane.

Besides, the Hindus are sort-of on a first name basis with their gods. Heaven is like a saucy soap opera for them—with never a dull moment. They don’t need a royal family like the Brits. Their gods are as chaotic and crazy as their lives. I admire this informality.

I’m currently anchored in Benoa, Bali, and no marine business here would consider opening its doors without first offering a plate of incense, rice, and other delicious snack food for their deities. (Fanta is the soda pop of choice for the gods—don’t ask me why.)

“Oh, that’s wonderful,” I gushed, “that you want the gods to be happy and well fed!”

“Actually,” said one shopkeeper in a whisper, “that’s not how it is at all. Notice how we make our offering outside the shop? That’s, hopefully, to distract the gods with our gift—and so they won’t come in and cause trouble. Many of them are SO mischievous—and those are the good ones!”

My favorite True Believers are in Thailand. They are mainly Buddhists—but happy to ‘use whatever works’ as one Thai Buddha-Buddy told me. So they chop up Islam, Hinduism, and Christianity—add a dash of Buddha-babble—and season with a few Kungfu movie concepts.

Needless to say, this is the age of specialization. Nobody can survive as a generalist anymore—not even a temple in Thailand.

For example, while anchored off Phuket, an American friend of mine was convicted on a minor drug charge—and asked me to pray for him at his sentencing. I decided to do that and more—and happened to mention this to my Thai masseuse. “Oh, then you need to go to the Temple of the Lenient Sentence,” she said. “Don’t worry,” she continued, “I’ll take you and Carolyn, and guide you through the whole process.”

The following weekend, we traipsed off to the Temple of the Lenient Sentence. Before we went in, our Thai host explained the ground rules by saying, “Now, Fatty, our gods aren’t like your gods. Don’t pay them upfront. They will take your money and totally forget about you. Instead, make a deal—the very best deal that you can negotiate—and tell them how much you’ll pay IF they keep their end of the bargain. Once they perform as promised, come back and pay within a reasonable time. Otherwise, bad karma to the max! But don’t pay ‘em upfront—pay only on performance!”

We followed her advice. Our friend got a lenient sentence. We paid in the standard coin of the realm—a big fat wooden elephant. (These Thai gods seem to be efficient—as there was an entire field of elephants in payment, some as big as a house! Serial killers, maybe?)

Singapore is another place we love to visit. They’re Chinese, and thus lie to their gods continuously.

“The gods don’t know any better,” whispered one devout worshipper to me as he burned a gold-colored cardboard Apple iWatch, “and besides, they don’t have any use for money!”

“They are also the Hungry Ghosts that have big mouths and small stomachs—not a happy combination,” one celestial money-burner informed me. “But it is better to be safe than sorry—and you can buy gold-leaf cardboard Cuisinart machines, microwave ovens, and modern juicers at any 7-Eleven.”

Speaking of gold leaf, many people rub statues of Buddha with gold leaf—to thank him for not caring about money and for not being materialistic.

Each religion is crazy in a different way, I guess.

If your boat is leaking in the Med, you pray to Poseidon. However, if the pumps keep it floating long enough to limp past the Rock of Gibraltar and into the chilly North Atlantic—then you have to petition King Neptune.

There are a lot of jurisdiction disputes in heaven and hell, evidently.

Boundary issues abound—and, yes, the Devil is in the details.

Polynesians are quite flexible. Their gods brought up the world (well, the Pacific islands, anyway) via a fish hook getting caught in a fishing net—and even have a bad-boy god named Hiro who’s a thief and a drunkard, and once tried to heist the mountain on Moorea! (The hero Pai chased Hiro back to his island. Hiro was, of course, drunk—and hit his home base so hard that a bit chipped off… which is why that particular isle in the Societies is still in two pieces… ah, the craziness of Polyculture!)

However, the Polynesians were quick to convert to Christianity—with the logical reasoning of ‘whichever congregation has the best toys, wins.’

“But,” one Christian Tahitian told me, “you’re J-guy might have caught a fish or two—but it must have been off a pier or a rock. He was no sailor and obviously not comfortable around the water with sailing canoes or catamarans—or why have Moses part the Red Sea instead of broad-reaching across it?”

“Hey,” I said, sputtering to the defense of the Stars and Stripes, “who cheated their way to victory in the American’s Cup so many times? Surely, it was not Allah rowing with his Sword! Or Buddha brooding under his tree. No, it was sail-trimming Christians—every time!”

“Let’s not even talk about Noah—and his pig-boat,” said the Christian Tahitian sadly, “You didn’t have to possess a god’s wisdom to know the Ark wasn’t going to be weatherly and would make excessive leeway. She was a dog in light airs—well, two dogs, actually.”

Which reminds me what I say when people ask how fast Ganesh is.

“You don’t name a racing boat after a ponderous, slow moving elephant,” I tell them ruefully.

Ganesh, of course, is the only elephant-headed god in the universe—which is pretty special! He’s also the God of Lost Causes and the Lord of Removing Obstacles—two neat tricks, for sure. Notice that Ganesh has a pen in one hand and a hatchet in the other? Yep, he’s also known as a special friend of writers—because he first attempts to win you over with his pen, and failing that…. chops off your head.

Ganesh is also noted for his robust sense of humor—as befits a happy fellow with an elephant’s head. “It’s great for picking up peanuts—and fondling woman, too!”

No, we don’t have anybody saying stuff like that in the New Testament, do we?

My favorite part of all religions is the part where they reveal that, yeah, they believe all the other religions are, like, goofy!

But all this international sea-travel, transcultural experience afloat, and sloshing inter-faith god-full-ness—makes for some light moments around the hymnal.

Once upon a time I had to flee Thailand—and, thus, left without clearing out and fled under sail to Muslim Malaysia. Upon arriving, I immediately went to the police station and informed the desk sergeant what had happened.

“Thank gosh that you—a fearful Christian,” said the proud police officer, “had the good sense to flee a crazed Hindu in a lawless Buddhist country—and seek the protection of the Sword of Allah!”

I had to smile—for the first time in days.

Of course, a lot of this is just perspective. I love writing columns like this, and my wife Carolyn hates proofing them.

However, occasionally, she gets in the spirit of things—like this time when she handed my column back to me and said, “It’s God-awful!”

“…too kind!” I swooned back, “too kind!”
Bio note: Carolyn and Fatty was last sighted in Batam, Indonesia, getting ready to joust with the local pirates in the Malacca Straits once again.