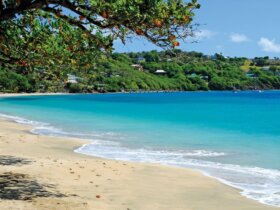 The path less traveled is often full of surprises – and opportunities. Most sailors who cast-off to the Caribbean from Europe set their sights on one of the Southern Leeward Islands like Antigua & Barbuda or northern Windwards such as St. Lucia. Those cruising south from the U.S. mainland depart from the East Coast and frequently sail nonstop to the U.S. or British Virgin Islands. Even those who take the so-called thorny path, or the thornless path coined by cruising guide author Bruce Van Sant, which traces a route south through the Greater Antilles, will only pass the north coast of Haiti. Few cruisers navigate around Haiti and along its southwestern peninsula to seaport towns like Les Cayes. It’s here, cruisers will find beautiful beaches, authentic restaurants, shops and friendly residents. It’s also where sailors can learn more about, and even volunteer, with organizations such as the non-profit, Hope for Haiti.

“We’d be happy to host visitors for the day and take them on a visit to meet with our education partners, tour our healthcare facility, or get to know one of the entrepreneurs we’ve supported in the Les Cayes area,” invites Skyler Badenoch, Chief Executive Officer of the Naples, FL-headquartered organization, which was named one of the 10 Best Humanitarian Relief Organizations by Charity Navigator, the largest and most-utilized charity evaluator in America.

Florida-based philanthropist JoAnne Kuehner fell in love with Haiti, and especially its children, and founded Hope for Haiti in 1989.

The focus from the start was and remains the creation of sustainable communities via programs centered on education, health care and nutrition, clean water, infrastructure and the economy. Most importantly, the organization partners with pre-existing entities such as schools and clinics and invests in technically skilled and passionate Haitians to empower them to help their own country.

“Hope for Haiti was a small organization run by volunteers with only 8 to 10 people on staff for the first 20 years. Then, the earthquake happened in 2010. Because we were already in-country, we could respond quickly and were able to immediately import and distribute medical equipment. After that, the organization grew. We have a staff of more than 60 now who actively implement comprehensive development programs,” says Badenoch.

Over the last year, Hope for Haiti subsidized salaries for over 400 teachers, trained some 200 teachers, set up 30 school computer labs, provided back-to-school funds for 24 schools and sponsored 10 college scholarships to partner schools.

The real beauty of the organization’s strategy is how its programs dovetail together. For example, nearly 7,000 school children had access to WASH at school. WASH, which stands for Water, Sanitation and Hygiene, is part of the organization’s clean water efforts. Health care is huge. More than 18,000 children, parents, and grandparents were treated at the Infirmary St. Etienne, mobile clinics, and public health initiatives. Farming is a big part of infrastructure enhancements, and several farmers recently received a monthly stipend and continuing training for their work in school gardens. Lastly, one of the economic kickstarts is the annual Economy Challenge. Entrepreneurs that work in Hope for Haiti’s focus areas present their ideas to judges in hopes of launching their own businesses. In the past, Hope for Haiti has invested in local yogurt and juice companies, hot sauce production, a chocolate business, and female artisan cooperatives that make jewelry out of paper mache. These local products and many more are supported by loans, grants and micro-grants made by Hope for Haiti, and they can all be bought and enjoyed by cruisers and other visitors to Les Cayes when in port.

“Ways that cruisers can help volunteer is with our infirmary or donations of needed basic medical supplies and investing in the economy such as assisting local farmers and fishermen,” says Badenoch.

Another way to get involved is virtually.

For example, there are virtual site visits. Plus, participation in the annual Hike for Haiti Fundraiser. The latter is set for April 1 to May 2, which is Haitian Heritage Month, and costs $30 to register. The event is based on the equivalent of the 200 flights of stairs students and families in the rural community of Marre à Coiffe climb to obtain an education, clean water and healthcare. Those at home, or cruising throughout the Caribbean, can find stairs to climb or run or walk 22,000 steps or the equivalent of 10.5 miles. Or those cruising north to the U.S. for the summer can consider a spring season stop at Les Cayes to find out all the amazing chances to make a difference in the Caribbean Island nation of Haiti. hopeforhaiti.com

Sailing with Charlie: Play With Yourself

Limericks. What fun! They can be clever, naughty or topical and should give the listener or reader a smile or even a good belly laugh.