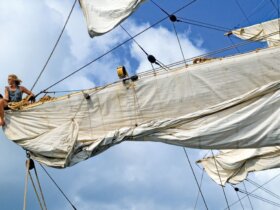 A Castle on the Sea

No team remained undefeated at the end of the first day of racing in the 6th Annual Carlos Aguilar Match Race (CAMR). In fact, nearly half the fleet or four teams – Finland’s Antti Luhta, the USA’s Stephanie Roble, the BVI’s Colin Rathbun and Greece’s Stratis Andreadis – are tied with four wins apiece. Even the leaders, the USVI’s Peter Holmberg and USA’s Dave Perry, are tied with 7 wins and one loss.

“This has to be the deepest fleet in the history of this event,” says Perry, a four-time winner of the U.S. Match Racing Championship and most recently rules advisor to Artemis Racing in the 2013 America’s Cup. “Every skipper here is good at match racing and has a shot at winning.”

Perry says it’s way too early to tell who might ultimately win from today’s results.

“The first round robin isn’t that important,” he says. “Someone could lose all their matches today and win them all in the second round robin and be right back in the game.”

The CAMR format is a double round robin, semi-finals and finals. Today the fleet nearly completed one round robin. In a round robin, every skipper races every other skipper once. The skippers with the most wins advance to the semi-finals.

Greece’s Stratis Andreadis is one of the four skippers with four wins apiece. Andreadis raced in the 2010 and 2011 CAMR. Since then, he says, “We’ve sailed in 20 to 30 match races, seen and learned a lot and become a tighter team.”

Even with the past experiencing sailing in Charlotte Amalie’s harbor, Andreadis says there is no way to prepare for the shifty wind conditions.

“It’s a humbling race course,” he says. “It teaches you patience and to steel yourself when you are behind and to take chances when they are given to you to get back into the game.”

The winner of the 2013 CAMR will receive a signature timepiece courtesy of Cardow Jewelers, the oldest jeweler in the U.S. Virgin Islands.

New this year, all ten teams are sailing with one junior sailor apiece from the Antilles School. One of them was 13-year-old Teddy Nicolosi, a seventh-grader, who is sailing with the USA’s Don Wilson. Nicolosi, already a talented sailor in his own right, placed an amazing eighth in the Optimist regatta held as part of the Argo Group Gold Cup, held in Bermuda in October, the penultimate stop on the Alpari World Match Racing Tour.

“It’s fun to sail with some of the top ranked match racers in the world. It’s a good experience for me,” says Nicolosi. “My job is to control the spin on the halyard and to clean up the ropes on the deck.”

“I loved having the kids on board,” says the USA’s Perry. “It’s such a profound idea and will make a lifelong impact on these kids. There are so many elements of match racing that are hard to teach in a classroom. The CAMR is certainly breaking ground with their youth development and I hope more match races will follow suit.”

The youth theme continues on Saturday when a group of Virgin Island’s school children will have an opportunity to try-on match racing during the Carlos Aguilar Match Race Youth Regatta, which will take place between 11:30 a.m. and 1:30 p.m.

Racing in the CAMR will continue Saturday with the conclusion of the double round robin expected.

Match racing pits one identical boat against another on a short course oftentimes near to shore. On-the-water umpires make instant calls and enforce the rules. The result is very exciting racing up and down the Charlotte Amalie waterfront.

Spectators are invited to watch the racing under tented bleacher seating where there will be live narration. Viewers around the world can watch via a live webcast on www.carlosmatchrace.com. Racing starts at 9 a.m. (GMT – 4 hrs) daily.

Sailors are competing in IC-24s, a local adaptation of a J/24. The CAMR is an International Sailing Federation (ISAF)-provisional Grade Two event.

The Virgin Islands Sailing Association (VISA) is the organizing authority for the CAMR, namesake for the late Carlos Aguilar, who was an avid sailor. The CMRC is a major sponsor.

Daily race results and copyright-free downloadable images by Virgin Islands-based photographer, Dean Barnes, will be available for editorial use on the official event website (www.carlosmatchrace.com).