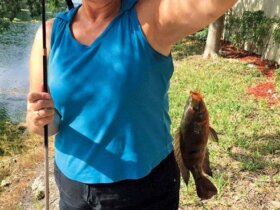 Fishing: There’s an App For That

A team on one of the smallest boats caught the biggest and most pounds of fish to win the two-day overall top prize in the Golden Hook Fishing Club’s 15th Annual Guy/Gal Fishing Tournament, held October 4th – 5th out of St. Croix Marine, St. Croix, USVI. Jose Sanchez’ reeled in a 49.9lb wahoo and his son, Jose Sanchez, Jr., a 43lb wahoo, on the second day of fishing aboard the 25ft center console, La Mensajera.

“We went out to the Lange Bank on the first day and there was so much seaweed in the water that we were constantly clearing our lines,” says Sanchez, Sr. “The next day, we headed north of Salt River and caught our two wahoo as a double header about 10:30am. It was team work that led to our win.”

Nine boats fished in this tournament nicknamed the ‘reel challenge’ of the sexes, where the Gals fished the first day and Guys the second.

“It was just before 7am when Jenna Arizu, our first in line angler, hooked a 19lb wahoo,” says Turn and Burn Capt. Jason Foust. “And the fish only got bigger as the day went on.”

The Guys aboard the 65ft Hatteras, Living the Dream, one upped the Gals with a total day’s catch of 97.6lb of wahoo.

“We were really excited because we beat La Mensajera by less than five-pounds to win the Guys day,” says Living the Dream Capt. Austin Schneider.

The Guys are now three ahead of the Gals for total wins in this tournament.

St. Croix captain Thomas Daley who appeared on the Travel Channel’s Bizarre Foods with host Andrew Zimmern, and is known for his delicious take on local fish and shellfish, was the guest chef for the tournament’s awards ceremony.