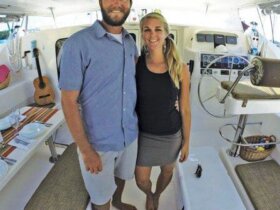 Olympic match racing star Renée Groeneveld and her Dutch team of Annemieke Bes, Lobke Berkhout and Mijke Lievens, won their first-ever Women’s International Match Racing Series (WIM) event. The Dutch sailors defeated the USA’s Stephanie Roble’s Epic Racing 3 – 0 in the thrilling final of the Carlos Aguilar Match Race (CAMR), presented by the U.S. Virgin Islands Department of Tourism, and the fifth and final event of the 2016 WIM Series. However, by reaching the final, the American’s secured the runner-up spot on the 2016 WIM Series.

“The girls on board did a really amazing job keeping us fast around the course at all points, and keeping us calm in the shifty conditions. I think that paid off over the long run,” says Roble.

“Everything fell into place for us and I’m really happy to sail so well together with my team,” comments Groeneveld, who took the third podium position in the 2016 WIM Series.

After just a short postponement due to very light breeze on the final day, Principal Race Officer Darcy Cook got the racing going in St. Thomas’ Charlotte Amalie harbor. Groeneveld and Roble both continued their winning streak, finalizing each of their semifinals to dispatch Swedes Caroline Sylvan and Anna Östling with a clear and comfortable 3 – 0 scorecard.

Having lost only two matches during the whole event, Groeneveld looked very strong going into the final matches. The question was how much Roble could capitalize on her local knowledge, having participated in many CAMRs over the last few years and finishing as the runner-up in the 2015 event. Apparently the prestarts proved to be more important than ever.

“The starts were tricky because along the shore there wasn’t a lot of breeze, so we had to try to keep the boat going and going. To win the start and pick the right side was the key today, and I think we did a really good job in the last half minute before the start, to achieve that,” says Groeneveld.

Stephanie Roble, Maggie Shea, Liz Shaw and Janel Zarkowsky of Epic Racing did all they could to prevent Groeneveld and her team from winning the event, but their efforts weren’t enough.

“Coming into this event, there were five teams in play for second overall and we knew it was going to be about winning the war, not the battle,” Roble comments.

The all-Swedish petite final was sailed between two teams who know each other extremely well, both representing the Royal Gothenburg Yacht Club. They raced in two tight matches, with lots of lead changes and exciting situations. World Champion and 2016 WIM Series winner Anna Östling of Team Anna proved to be strongest, defeating Caroline Sylvan and her New Sweden Match Racing Team with two straight wins.

“Our day ended really good at this fantastic event. It’s always better to finish a regatta with a win and now we’re back on the podium again,” says Östling, referring to her disappointing fourth place in the Busan event a month ago.”

The 2016 WIM Series kicked off with the Helsinki Women’s Match in Finland in June, followed by the Lysekil Women’s Match on the west coast of Sweden in early August. The World Championship and the Buddy Melges Challenge in Sheboygan, USA, was held in September, and then the Busan Cup Women’s International Match Race in Korea in October. Finally, the CAMR in the sunny U.S. Virgin Islands was, according to WIM Series Manager Liz Baylis, the most perfect way to conclude the fourth WIM Series season.

The Virgin Islands Sailing Association (VISA) is the organizing authorities for the CAMR, namesake for the late Carlos Aguilar, who was an avid sailor and loved match racing.