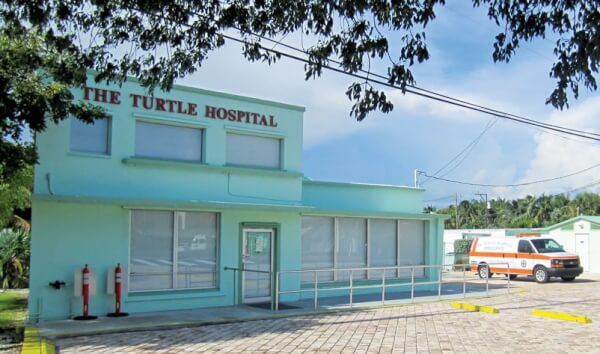 According to Wikipedia, the tumors can impede vision, feeding and movement. Around 25-30 percent of turtles with external tumors also have internal tumors, primarily in heart, lungs and kidneys.

When infected green sea turtles are rescued, they receive a computed tomography (CAT) scan to look for internal tumors and might be treated with a high tech laser. “When the disease was not so severe,” said Zirkelbach, “70
percent of the infected turtles survived. Now, only one-third survive.” 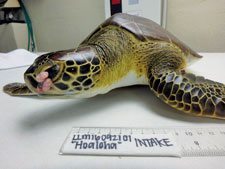 According to the Florida Fish and Wildlife Conservation Commission, four-foot long green turtles weighing up to 440 pounds are “among the oldest creatures on earth [and] have remained essentially unchanged for 110 million years.” Green sea turtles are slow growing, with the longest age-to-maturity of any sea turtle species, from 35 to 50 years. Nests are constructed on coastal beaches, and are threatened by sea level rise. They are also threatened by poachers, fishing gear entanglement, bycatch and plastic trash in the ocean. Fibropapillomatosis in turtles is especially prevalent around populated islands, said Zirkelbach.

On the other hand, a researcher in the Marquesas and Dry Tortugas, a non-developed area off the coast of Key West has seen only two cases in four years.

Zirkelbach has traveled to Cuba over the past 20 years and said the westernmost area, Guanahaca Peninsula, has no infected green sea turtles. In fact, beaches there are home to the second largest breeding population of green turtles in Cuba with an average of more than 300 nests per season.

People are becoming more attune to pollution in oceans and increasing water temperatures, and thus there is hope for the green sea turtle, said Zirkelbach. And with a half dozen sea turtle rehabilitation sites and preserves throughout Florida, turtles may be getting sufficient attention to encourage people to be more aware of the threats, regardless of the federal downlisting from endangered
to threatened.

The goals of the Turtle Hospital are to rescue, rehabilitate and release sick and injured sea turtles; educate the public through outreach events and local schools; conduct and assist with research aiding sea turtles; and work toward legislation making beaches and water safe and clean.

Since its founding in 1986, the hospital staff has treated and released more than 1,500 sea turtles. The turtles are released at different locations depending on species, from 20 miles north of Marathon in the Florida Bay, to a local beach, or launched off a boat into the gulf or ocean. The Kemp’s Ridley species are taken 70 miles west of Key West to the coral reefs of the Dry Tortugas.

If you need a gift this holiday season for a person who has everything, perhaps adopting a turtle is the perfect idea. See www.turtlehospital.org for more information.