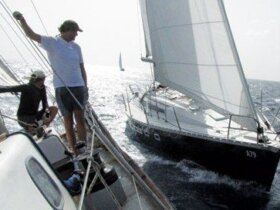 Kirst Feddersen, a “born here” St. Thomian, is working as head mast designer for America’s Cup holder Alinghi.  On behalf of All at Sea, Nils Erickson checked in with him during the America’s Cup racing in Valencia.

Do you think you have a faster boat?
Yeah, I think maybe we have a little edge

You grew up in the U.S. Virgin Islands.  How did you get from St. Thomas to Alinghi?
Long story…basically I went to University, Embry-Riddle Aeronautical University… I was pretty into planes and aerodynamics so I studied aerospace engineering, then after I graduated I went back to St. Thomas for a little while, just bumming around, figuring out what I wanted to do.  I wasn’t really interested in working for a big aerospace company.

I was doing some sailing with Chris Rosenberg and Peter Holmberg.  I thought I wanted to apply the aerodynamics and engineering to sailboat design.  I took a trip and drove from Florida to Rhode Island, stopped at a bunch of places on the way, and knocked on a bunch of doors.

One of the doors I knocked on was at Eric Goetz Custom Boats.  I met Dirk Kramers, at the time it was just before the 95 cup, and he was the head engineer for America3.  They were building a bunch of boats at Goetz’s shop.  Dirk had just left Hall Spars, and he said I should go talk to Ben Hall at Hall Spars—and I did, and ended up getting a job at Hall Spars.  Then I worked there for five years, worked with Dirk Kramers on a couple of projects—one of them was the rigs for Young America.  Dirk ended up being the head engineer at Alinghi.  Sent him my resume, and eventually got the job here.

When did you start working for Alinghi?
In 2001.

Are you going to stick with Alinghi?  You have been with them for two Cup cycles.
That’s a difficult decision.

You have reached the pinnacle, designing masts for the team that won the America’s Cup.
Yeah, I like to keep my options open.  The only thing about working for Alinghi is I can’t be at home, in the Virgin Islands…which is where I want to be.  I’ve got a house there now.  That’s really the only downside to working here.

How important is it to be here, hands on?  It’s not possible to telecommute?
This time I think I only spent half my time here, the other half in Rhode Island where we build our masts at Hall Spars.  I’ve been doing a lot of telecommuting, so it could be foreseeable to do something like that.
Certainly being here, and being able to talk to the guys after a day sailing, getting that interaction is pretty important.

Nils Erickson charters the Formula 40 sailboat Soma
out of St. John, U.S. Virgin Islands.  He is reporting on the Cup from Valencia.