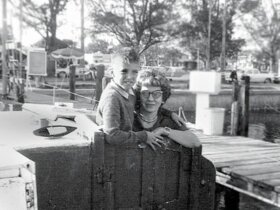 Kids Bring Out the Kid in Me – Raising Kids Aboard

Charlie was somewhat taken aback when four young, single fellas came clumping aboard the 36’ yacht at Nanny Cay for the start of their week-long sail training course. He’d been told it was a family of three!

After all the usual briefings they untied and departed. During the introductions Charlie found that his ‘crew’ was reluctant to divulge their occupations. It turned out they were all young army officers from Fort Bragg and had just returned from a deployment in Iraq. It was then that Charlie decided to change his normal itinerary to take in the wildest party spots in the BVI. At the Willie T they’d heard about the ‘body shots’ but no pretty young things volunteered themselves. Young Captain Avery volunteered himself and lay face up and horizontal on the bar counter but found that no one was interested in sucking the juice of a lime from his sweaty Boxers. Nevertheless it was a hilarious evening.

At Quito’s on Saturday night the band didn’t show up so after a couple of drinks the fearless foursome grabbed up some decorative inflatable instruments that were hanging on the wall, headed for the stage and made their own band. Their karaoke effort earned them several rounds of drinks.

Foxy’s was a night to remember. These guys were always first onto the dance floor. Devoid of inhibitions they grabbed up the nearest ladies and danced like there was no tomorrow. You just had to love ‘em.

At the Last Resort, Al, the singing chef, made the mistake of asking the audience if there was a drummer out there who might help them out since their drummer hadn’t turned up. First Lieutenant Perry was on the stage in a flash – but had never touched a drum kit in his life. After a drum roll and a short solo someone switched off his mic, but still he continued…to a standing ovation at the end (by his three compatriots).

Every day the course continued and the guys never seemed to suffer any ill effects from hangovers or lack of sleep. The boat was kept tidy, chores were done and the tests were completed and passed.

During break times and lunch hours the subject of Iraq was sometimes broached and it was Captain Rich who came up with some words of wisdom, “If the Iraqis were provided with a few thousand cases of beer, some good Scotch and a bevy of good-looking dancing girls they’d have something to live for, then they might stop blowing themselves up.”