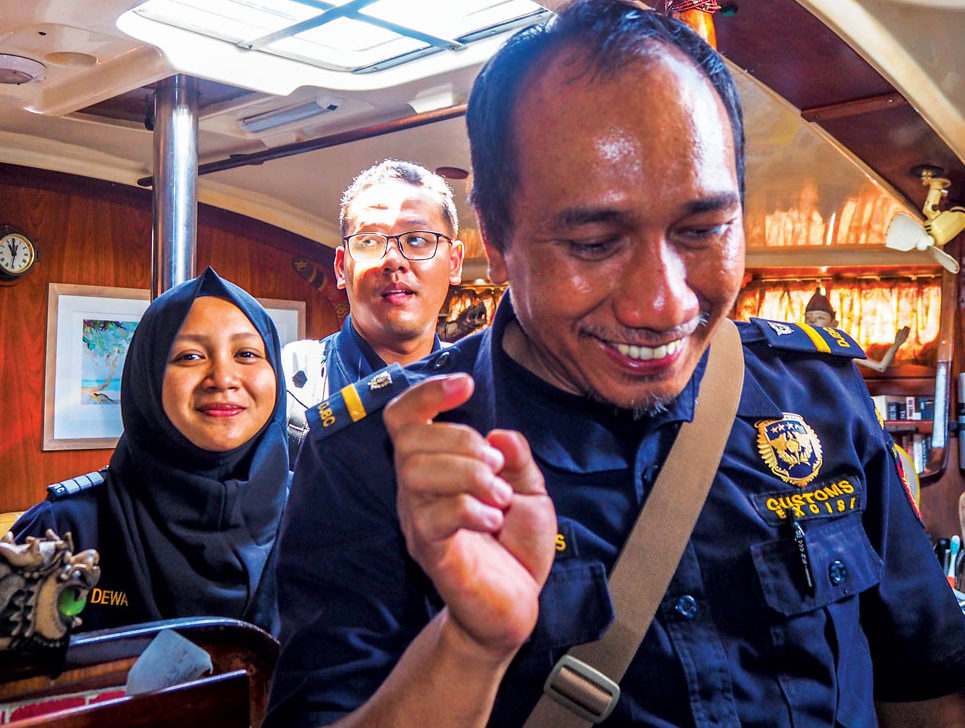 I’m often accused for being addicted to circumnavigating—and putting too good a spin on ocean sailing. There’s some truth to this. However, I love long passages offshore and hate sailing to windward, which leaves me little choice. I’m totally a ‘west-about’ kinda guy. In addition, at 67 I’m literally quivering with passion about my life, my marriage, and my literary journey. I can’t help bubbling with enthusiasm; can’t contain my obvious lust for living. It’s true—I have so many good vibes dancing within me, they constantly spill out. I love kissing life full on the lips! In addition, as a young man I didn’t want to just learn about brotherhood, I wanted to practice it daily. Thus, for me, a circumnavigator’s existence is mostly orgasmic.

However, there are aspects of circ-ing that don’t appeal. Here they are. 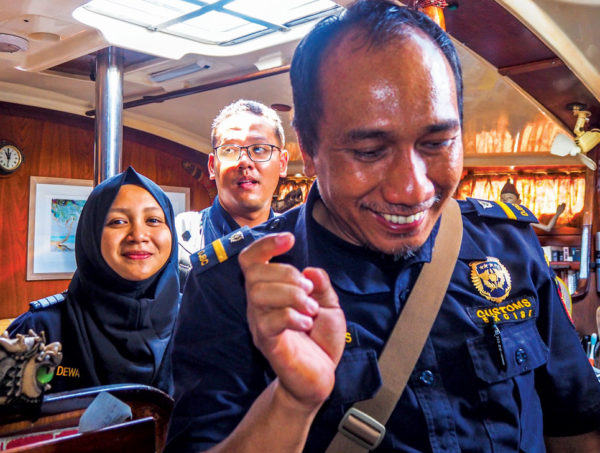 Number One: Officials. Everywhere I go I have to deal with small, mean, fiendishly diabolical men in starched uniforms who are hell-bent on making me suffer. They have a tiny bit of power and delight in lording it over the cowering folks that have to endure their needless, pointless, professional cruelty. They are sadists who have found the perfect job. A dozen times in the last decade I’ve walked out of a Customs and Immigration office—and vowed to sell my vessel and buy a farm in Indiana.

I’m convinced that such officials aren’t hired unless they can prove they tortured animals as a child.

Are all ICE officials auditioning to be SS officials? No, of course not. A few French officials appear to be human. I’ve never been abused by an official from Singapore or New Zealand. In fact, I believe that, worldwide, there are somewhere between 9 and 11 officials who will get into heaven—but perhaps I’m too generous.

And I’m not even talking about the corrupt ones!

The Art of Fishing and Sailing (by Robert Scott)

What country—other than my own—has the worse officials? I dunno—there are soooooooo many high achievers in this realm. Certainly Indonesia and the Philippines are high on the list. As a continent, South America tops Africa. The Mideast certainly excels. I’ll never forget being almost arrested for taking a selfie in front of the imposing Press Freedom building in Egypt—which was actually a monument to the dictator’s paid propagandists. The Red Sea and the Suez Canal folks make the sickos at the Panama Canal seem almost nice. Ecuador? I quake in memory! But, hey, Salalah was much worse—so bad that I’ve deeply repressed the details of our visit, at least according to my therapist.

Number Two is related to Number One: Dramatically Increasing User Fees for Nothing at All. I’ve paid ‘light fees’ to countries that don’t have a signal, er, single working navigational light. I kid you not. What used to cost us $4 in Tonga now costs over $400 (US), and there’s not a single dinghy dock or garbage pail for the marine community in the entire country.

Some of the smaller island nations charge ‘daily per bag fee’ for garbage disposal—then simply (and profitably) throw the bags into the ocean on an outgoing tide.

I remember when clearing into the BVIs used to cost a dime—and they didn’t make change. (Albert on Jost used to yell at the confused newbie charterers attempting to clear in for the first time, “HOW MANY TIMES DO I HAVE TO TELL YOU! (How to fill out the form.)

Please don’t think I’m a racist who is blaming greedy brown men for my plight: I used to love clearing into Australia but now it is not only abusive, it is expensively abusive!

The latest international scam is demanding you email the Banana Republic ahead, prior to your arrival—then fining the vessels that don’t (or those unlucky sailors they’ve lost the paperwork of) $2,000 a pop. (In these situations, ‘due process’ means, well, the bill has been processed and it is due, dude!)

Where are all these diverse rules and ever-changing international regs posted other than Noonsite.com? I dunno, on a bulletin board in the space station on Alpha Centurion, perhaps?

Landlubbers often ask me if I’ve had encounters with pirates. I always respond, “Dozens of times, actually. Most of the pirates now wear fancy government uniforms, polished black shoes, and their dens are air-conditioned at taxpayer expense! Their car of choice: Mercedes Benz. Preferred weapon: iPhone 11.”

Number Three is related as well: yacht agents. Once upon a time, agents were hired by skippers to avoid the excessive and corrupt charges. Now the agents are in cahoots with the officials to milk your purse for as much as possible. More and more countries are ‘requiring’ yachts to employ an agent—to better streamline their collection of graft, more graft, and lots more graft.

Think I’m kidding or exaggerating? I’m not. In order to dive over the side of your yacht and clean your prop in Oman, you must hire an official yacht agent (read: a fellow in a white dress named Mohammed that kicks-back to an official) to apply for a permit for you—a time-consuming and expensive hassle.

These agents are smart—in the worst way possible. We’ve been to places where the agents 1.) are the only one in possession of the official government forms, 2.) have forced the government to stop allowing English to be spoken or written while clearing in—only the local variant of pig Latin or something. Wanna get fuel? Well, you can’t until your agent gets a piece of the action. Wanna rent a car? Go to dinner? Get laid? Visit a bar? Get mugged—not until your agent gets his, dude.

What could be worse? In Myanmar, they put an unwashed, grinning thug with a huge knife aboard your boat. He stays there the whole time, making increasing bizarre food and drink demands while telling loud jokes about machine-gunning old ladies and stomping their babies back-in-the-day. Yes, you have to pay him—even if he slits your throat.

Number Four: marina operators who keep telling politicians how difficult it is to shake down the marine community at anchor—but how easy extorting them is if they are packed into ghettos called Marina Resorts.

I mean, I’ve been forced to live in some horrible trailer parks in Appalachia during my youth—but all of them allowed a reasonable space around the trailer. Not so in ultra-expensive marinas. The yachts are cheek-to-jowl and rail-to-rail, and that is just the way it is.

One more note: according to these folks with dollars signs in their eyes, a single boat in a bay pollutes horribly but four thousand identical boats crammed into the same harbor with shipyards, restaurants, bars, and brothels… do not.

The main reasons that sailors give thousands of dollars to rally organizers in Third World countries is because they ‘take care of all the myriad details of clearing in.” Organizers know this. Thus, it is in their best financial interests to scare their potential customers as much as possible while, at the same time, encourage the local islanders to make it as difficult and expensive as possible for a non-rally yacht to clear in. They make it so difficult, in fact, that the visiting yachts will happily pay megabucks to the very rallies that are heavily contributing to the problem!

Wanna sail across the Atlantic or the Pacific in the best weather possible? Oh, dear—that means you want to ‘crash’ the rally taking place then—and open yourself up to the charge of ‘piggy-backing.’ How awful! Sea gypsies! Cocktail Party Crashers! Boat bums! And everyone knows that 100 newbies on their brand new million dollar air-conned Oysters (with their clever detachable keels like Polina Star III) are far safer than those toothless old salts on their world-weary Westsail 32s, right? Can’t safety at sea be measured by Price Waterhouse best of all?

Why, isn’t it amazing that officials allow those dare-devil-non-rally members to sail across the ocean for free? Shouldn’t something be DONE? Couldn’t cruising be solely confined to ROWMWCCWAHTPs, Rich Old White Men With Credit Cards Who Are Happy To Pay?

And, sadly, there aren’t enough column-inches in the whole world for me to bring up the subject of marine insurance—where city-slicker companies in far away countries extort honest sailors out of thousands of dollars per year so these bewildered-but-trusting boaters are allowed to go into marinas and shipyards where they will be charged even more (as pre-softened insurance-company-certified suckers).

I could go on forever. Instead, I just send my darling wife Carolyn ashore to clear in. Why? Because twice I’ve dragged an official across his desk by his necktie. Each time Carolyn said, “That’s not going to speed things up, Fatty!” and both times she was right.