ALL AT SEAThe Caribbean's Waterfront Community
HomeLifeDredging Up Business
Life 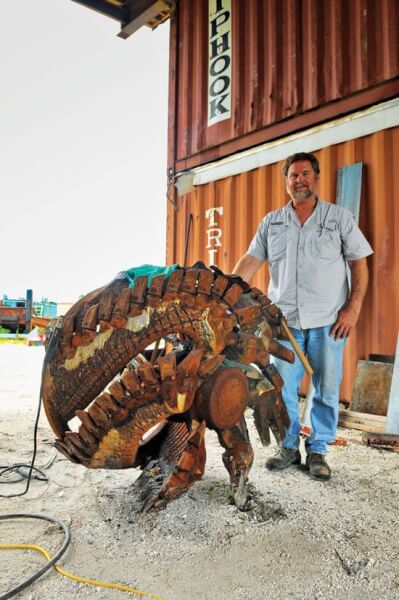 If you have navigated the waters of western Florida, you’ve probably entered a channel, pass or inlet that Florida Dredge and Dock has worked on. The company’s vital service keeps our waters navigable and its family members very busy.

Don and Chester Fletcher are following in the wake of their father. Strawberry, as the senior Fletcher became known, worked most of his life on all varieties of dredges, including live aboard machines. Spending time with their father meant being around the machinery, so it was natural for the boys to pick up what their father was doing. Eventually, they too were at work on dredges, learning by doing, and learning well.

In 1978 they incorporated and started building and working their own dredges. The Fletchers came from an old school mentality of building what was needed rather than using a cookie cutter mentality and trying to make someone else’s design work. Their first job was dredging a marina in Ozona, Fla. After building the right dredge for the job, they went to work.

Since then the company has grown along with their equipment inventory. Their operations office, yard and docks are located on the waterfront in the Tampa Bay area. Marinas, navigation maintenance, restoration, reclamation and development projects take them as far north as Alabama and as far south as Naples.

The fact that they build and modify their own equipment gives them an edge over the competition. The type of dredge and support equipment is determined prior to bidding. If the bid is won, work begins immediately to set the expensive equipment in the most efficient configuration to get the job done efficiently and on time. One 12-inch dredge can run to a million dollars, Don says.

A job they are currently involved in requires dredging Blind Pass between Sanibel and Captiva Islands. Equipment required includes a 150-foot dredge, a 110-foot support barge with a 50-ton crane, two 45-foot tugs, 30-foot and 26-foot smaller work boats, and a couple of small outboard skiffs. All of that equipment, along with more than 8,000 feet of pipeline and a pump booster, is a lot to assemble, operate and maintain for just one job.

It may seem like a simple project, but even the particulate they are dredging can cause difficulty. The bottom of Blind Pass is primarily broken shell and is much harder to pump than sand or silt, requiring bigger gear.

Don admits that these days he is not the one doing the welding or dredging. Instead his time is spent managing the supply chain and more than 60 employees. But he still says his favorite part of the job is “figuring out how to get it done.” With help from his brother and business partner Chester and a trusty crew such as Charlie Jump (who has worked for the company for 30 years) and Randy Hicks, he is always able to “smart it out.”

Surprisingly, the permits and paperwork portion is not much of a problem for Florida Dredge. Don attributes this to an understanding of the importance of the work they do. It also doesn’t hurt that they have a good history of working with government agencies including restoration projects under the Florida Department of Environmental Protection.

Don explains that dredging in the early days of his career had a bad reputation because of the actions of some developers. With time, a better understanding of dredging’s benefits has evolved, including awareness of environmental restoration work and the positive economic impact of well-maintained waterways for communities. Don says that today there is less of a stigma, but as long as the rules are followed, jobs proceed as they should.

Patience is one of Don’s virtues. Bidding can be a long-term process, and projects can take time from fund appropriation to when work actually begins. He is quick to point out the bright side. The dredging industry is not impacted as much by economic downturns because funds appropriated in times of liquidity can take so long to be distributed that the jobs are underway in times of recession. And, once jobs begin, they can last for years.

A restoration project Florida Dredge completed on Lake Panasoffkee, south of Wildwood, Fla., required dredging 8 million cubic yards through 42,000 feet of pipeline. The crystal clear spring-fed lake was overrun with sediment and vegetation. Their job was to dredge the bottom to restore it to its original condition. Care had to be taken that it was not dredged too quickly or the lake would “trip,” a dredging term meaning it is disturbed so much that it would no longer be able to filter. They struggled with weather, low water conditions and a precise timetable over four years, but the job got done and the lake was fully restored.

Don says that, in the future, “it’s difficult to see who is going to do this job.” Outside of his family and crew, he has a hard time finding people to fill the ranks of dredgers.

“It’s a good job. I would say most of my guys are earning $50K or more, without a degree,” he says, adding that if the work ethic is there and time is invested, salaries can go as high as $100K. Dredging can be a grueling seven-day-a-week job moving from project to project. As a result there is a relatively small work pool to draw from.

So the next time you run a pass or inlet or enjoy a day at a park where a reclamation project has occurred, tip your hat to the dredgers responsible. It may have been Don’s guys and equipment that got the job done.

Glenn Hayeshttp://www.HayesStudios.com
Glenn Hayes is a writer and photographer based out of west central Florida and has marine industry background spanning almost a quarter century. He can be reached through his web site www.HayesStudios.
RELATED ARTICLES
Life