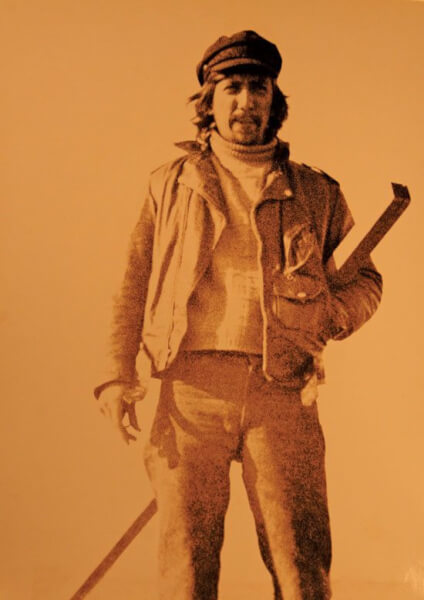 Alabama is not, generally, considered a glorious cruising destination for sailing globetrotters. I didn’t even intend to stop until fate clocked the wind on our nose. We were passaging from New Orleans to Paradise. The year was 1970. My wife Carolyn and I lived aboard a funky 22-foot Atkins double-ended sloop named Corina. Our circa 1932 vessel was old and worn and built of wood. We were starry-eyed teen-agers. We were green (in the seamanship-sense, not the current environmental one). We were also striving to be hippies – beginning our life-long addiction to freedom. And we were stone-cold broke or “as penniless as Buddha” as we’d phrase it.

Back in those days, there were almost no marine facilities on Dolphin Island. We anchored amidst the shrimp boats, almost lost in the maze of nets and gear. There was only one place on the waterfront open, a bustling seafood restaurant.

We took our empty bellies ashore. No matter where we strolled, we could smell that restaurant. It smelled like heaven. We decided to go in – if only to read the menu. It was full and warm and brimming with laughter. There was an open stool at the bar. I waved Carolyn upon it. “I think I have enough to buy you a beer,” I said, as I sorted through my pocket pennies. Alas, I did not. But she had a couple of dimes stashed away in her jeans, and we managed to come up with enough for their smallest, cheapest draft beer plus ten percent for a tip.

I thought we’d been discrete. Perhaps not. A few minutes after Carolyn began sipping her suds, the bartender asked me, “What do you like to drink?” He looked straight as an arrow, and I had hair down to my ass. I was wary. “Oh, I don’t want to order nutt’n.”

“I got you pegged for a Bourbon imbiber,” he said, smiling.

A few minutes later a waitress called out clearly, “Two G&Ts!” and the bartender made one – plus a Bacardi and Coke. “Damn!” he said aloud when he realized his error. Next, he theatrically scratched his head as if puzzled, sighed, and then carried the drink over to me. “Mistake,” he said with a wink. “Our loss shall be your gain.”

It was a line from the latest Dylan album, and I knew I’d found a kindred spirit.

“You’re welcome,” he said. “Fact of the matter is, I’m not a very good bartender. I make a lot of mistakes. Enjoy.”

So there we were, in the ‘happeningest place in town,’ with a bottomless cup of grog.

“I never doubted,” she said.

We’d only been together about a year at this point, but I knew then, as well as I know now, 43 years later, how important she was to me. Some people never find The One. I found mine at 15 years of age in Chicago, when Carolyn came aboard to sew up my vessel’s curtains.

She’s been sewing happiness into my life ever since.

We were sitting right next to the bartender’s glass washing station. It was busy, but we were able to chat between drink orders. We both dug Norman Mailer, Paul Krassner and Hunter S. Thompson. When I discovered he hadn’t read Richard Brautigan’s “Trout Fishing in America” – I dashed out of the bar and quickly rowed out to Corina to gift him a copy.

One of the diners must have watched me through the window as I did so. He was a big, tall, rugged guy, and he soon moseyed over. “That your stick-boat?” he asked. It was the first time I’d heard that expression.

“Care to join us?” He motioned at his table. It looked like a Norman Rockwell painting. There was a smiling wife, three freckled kids, and a couple of grinning grandparents. They glowed with happiness. I hesitated. The bartender, reading my thoughts, said, “Dave’s good people.”

It’s difficult to convey exactly why the next three hours were among the finest of our young lives. Sure, Dave bought us dinner and that was nice – to have a full belly. But it was more than that. They were somehow ‘instant family.’ He was a farmer who nurtured dreams of sailing offshore. His wife was a seamstress like Carolyn. And the kids were cute as buttons. Even the grandparents radiated warmth.

“We don’t grow nothing but them collard greens,” Dave said, playing the southern redneck to the hilt, “nor can we afford to eating anything but dirt – leastwise, not normally. But today my wife and I are celebrating our fifth anniversary – and you’re invited.”

Dave’s laugh was rich and melodious, and he wasn’t shy about unleashing it. We told him of how – in order to get Corina at a good price – we’d gotten the owner’s girlfriend (Lynn Orloff, author of Can-to-Pan Cookery) to shut him off.

I agreed I was.

He’d grown up on a farm, yet dreamed of the sea. He was full of questions about storms, sharks and pirates. “And how do you know when we’re getting close to the edge … you don’t want to sailing clean off the earth, do you?”

I grinned. “Just count the lines of latitude as you sail over ‘em,” I quipped. “Otherwise, yeah, you can fall off the edge.”

“Now, now,” I scolded her. “We didn’t steal nothing. It was ours, sort of. We just liberated it is all. Plus, we saved a lot of time for everyone – by not going through lawyers and courts and such.”

We’d purchased Corina without a rig only to learn later that it had a complete rig in storage. We really needed a mast and rig, even if we didn’t have a penny to pay for the expensive three-plus years of storage it had accumulated in the spar shed.

So I waited until the busiest Spring Day imaginable at the shipyard – and arrived aboard Corina with a bunch of boisterous helpers. But the more hands, the merrier. So we enlisted the help all of the yachties in the yard as well. We had to move half the masts in the shed to dig ours out.

It all went without a hitch. The hijackers (some aware, most not) tossed the rig aboard Corina in considerably less time that it takes to say, “…who’s got the ‘paid-in-full’ receipt?”

“Audacious!” crowed David as he ordered “hot apple pie, a mode” for all.

Carolyn was fairly drunk now. “…Proctor and Gamble!” she slurred.

Corina has been abandoned for many years in the Chicago River, just across the water from P&G. They regularly spilled large quantities of oily byproducts into the river, as the fine was only $50 – much cheaper than shipping it off in a rail tank car for proper disposal. But environmental awareness was beginning to be labeled as such in the mid ‘60s, which P&G ignored by dumping a double load soy byproduct into the water. The resulting sludge was so thick that the City of Chicago was forced to dam the slick off … just astern of my now-completely-drowned-in-oil boat.

I took a picture. Gee, she was a mess! I brought it to the Chicago Trib. I told my sad, sad tale. Soon P&G’s lawyers were calling me up, begging to put Corina back into Bristol condition.

I did, indeed, work for the Census Bureau for a couple of days – enough to learn my future was not in government service. In order to get paid, however, I had to give the Census Bureau a Social Security number – something I lacked. But the head of the department (I’d keep demanding my pay and being kicked upstairs.) had a SS number – so she graciously allowed me to use hers. “You can have my taxes added to your retirement fund, I don’t care!” I told her as I wrote it down on my pay form.

That’s not how it turned out. Those early ‘do-not-fold-or-spindle’ computers weren’t too bright. That poor woman didn’t see another pay check for six months, I started getting a $500 a week check from Uncle Sam – which, of course, I used to outfit Corina and meander down the Mighty Mississippi to the Gulf of Mexico.

“Now, now,” said his slightly-more-skeptical wife, who hadn’t spoke much. “Something is fishy here. You don’t just rip off the Feds and get away with it.”

“Right you are,” Carolyn said. “And when the FBI was going to haul Fatty off to a dungeon in Washington, D.C., well, I had to buy ‘em off with my college tuition money. So, in reality, he’s sort of an ‘indentured stud,’ if you wanna know the truth of it.”

I smiled. By this point, the restaurant was mostly closed. The bartenders and waitresses were all sitting around with us – one extended, well-fed family.

I’d stupidly brought my prejudices with me. Back then, things in America were a tad more polarized between North and South. Now I realized that ‘people are people’ no matter where you go… in rural America, Asia, Africa, the Mideast, where ever.

If these were rednecks, I wanted to join the tribe.

And I also realized that night how important trust is. We were learning to kiss life full on the lips. A few minutes ago we were hungry and friendless, now we were full of food and love and friendship.

Life will always work out in the end, and if it hasn’t worked out yet, that’s because it isn’t the end.

Tomorrow might be the best day of our lives. We were in the moment. We knew the past was history and the future a mystery. We always trusted everything would ultimately work out, and it did. “When the student is ready, the teacher arrives,” is another way of saying this. To travel is to learn. The planet was our classroom.

I said to Carolyn, “Everywhere we go, we’re home. Everywhere we go, people are good. Everything we do with righteous intent is always met with joy – IF we do it with love and compassion in our hearts.”

“Kiss me,” she replied, showing she was the smarter of the two.

I will never forget the magnificent camaraderie of that room, in a nameless Gulf Coast seafood restaurant, filled with good vibes, and the smell of golden fried Gulf shrimp and steaming hush puppies, perched over the water in Dolphin Island, Ala.

Editor’s note: Fatty and Carolyn are currently back in the Windy City, filling in Chicago Yacht Club members on their various circumnavigations.

Cap’n Fatty Goodlander has lived aboard for 53 of his 60 years, and has circumnavigated twice. He is the author of Chasing The Horizon: The Life And Times Of A Modern Sea Gypsy

and numerous other marine books. His latest, Buy, Outfit, Sail: How To Inexpensively and Safely Buy, Outfit, and Sail a Small Vessel Around the World

is out now. Visit: fattygoodlander.com