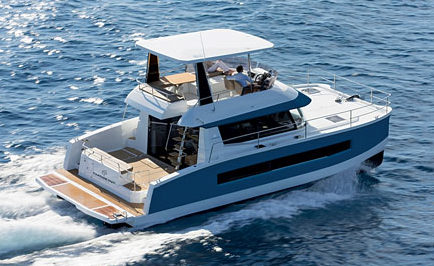 Catamaran Training at Two Offshore Schools in Florida and the BVI

A charter guest asked me this peculiar question while we were sailing through the Narrows between Tortola in the British Virgin Islands and St. John in the U. S. Virgins.

"Ahh..no, they’re anchored," I replied. Later I pondered the truth of that after studying some early charts of the American (USVI) and British Virgin Islands (BVI). If you refer to the modern coordinates of St. Thomas and St. John in the USVI as you study these excerpts from four earlier charts, you’ll understand why.

Chart No. 1, an inset entitled "Carte Particuliers Des Isles Des Vierges" from Carte Reduite Des Isles Antilles dated M.DCC.LVIII or 1758, shows both St. Thomas and St. John almost three degrees further west. It is remarkable that the French survey was that close since the sextant was not developed until 1757 nor was John Harrison’s chronometer until 1764.

Compare the coordinates of chart No. 2, "The Virgin Islands From English and Danish Surveys" by Thomas Jeffreys, Geographer to the King, dated 1775. Both islands have moved toward the east and St. John has taken a dive south. Chart No. 2 includes interesting notes showing why some islands have acquired their names. Under the chart’s section of "Peculiar Names," just east of Cabo de San Juan or Northeast Point "(Porto Rico)", Jeffreys tells us about "La Cagada or Beshut Island, so named from the Fowls Dung; The Tropick Keys (west of Culebra), so named from the great number of Tropick Birds breeding there; Bieque or Crab Island, formerly Borequem, so called from the quantity of Crabs that are found there; The Carvel of St. Thomas (Sail Rock) or the Hoy, a white Rock with two Points appearing like a Sail."

Jeffrey’s chart shows that Drake’s Channel starts from northeast of Puerto Rico down past Little and Great Passage Islands (the Culebras) and splits off to round St. John and swing past Witch Island (Flanagan Island) to starboard to enter the channel whose original name was "The Virgin’s Gangway of the Freebooters Properly,” but also referred to as "Sir Francis Drake’s Bay."

A mere nine years later we find chart No. 3, "A Chart of The Antilles, or Charibee, or Caribs Islands, with The Virgin Isles" by L. S. De La Rochette, dated MDCCLXXXIV and published by Wm. Fades, Geographer to the King, Charring Cross, March 1st, 1784.

His notes give us a peculiar and little known distinction between the Windward and Leeward Islands: "From the Situation of the Caribs Islands, compared with that of the Westernmost Isles of the Mexican Gulf, they are named (the Windward Charibbees) by the Spaniards, as well as the French, the Dutch and the Danes, whereas the English, who consider the position of those Islands respectively to Barbados, gave them the name of Leeward Charibbee islands."  On this chart both St. Thomas and St. John have moved slightly  north with a jaunt toward the west.

Finally we skip 37 years to chart No. 4 dated in 1821, "The Virgin Islands, Trigonometrically Surveyed and adjusted by accurate Astronomic Observations with insets of Road Harbour, Tortola and the Harbour of St. Thomas. Here, the islands of Great and Little Passage sport the modern names of Culebra and Culebrita. Bieque Island is now Vieque Island and the name of Sail Rock is added to Bergantin or Carvel. But Flanagan Island has switched names from Witch Island to Flanagon or Flemingham Island, while Pelican has become Witch Island. While clearing up the confusion between the names of Flanagan and Pelican, the chart is almost-spot on with St. Thomas and St. John coordinates.

To add to the confusion, satellite photos show:
St. Thomas: 18 degrees 18 minutes N, 64 degrees 54 minutes W, or slightly south and east of its position on the chart.

Perhaps my guest’s question wasn’t so dumb after all!