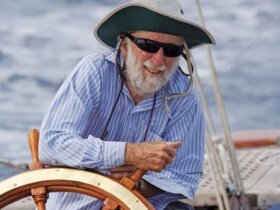 St. Kitts and Nevis are two islands whose verdant summits are almost permanently nestled in white fluffy clouds. Joined together as a single nation within the British Commonwealth, they are the quintessence of the Caribbean. Relaxed and laid back, with the perfect mix of palm tree lined beaches and tropical rainforest, beautifully restored sugar plantations and crumbling old colonial buildings. You can either kick off those flip-flops and unwind or pick up your walking shoes and go exploring.

St. Kitts is the more upbeat of the two islands and it’s worth spending a day or two exploring the vibrantly shabby capital of Basseterre. If the anchorage outside becomes untenable in southeast-southerly swells, the Port Zante Marina offers very reasonable rates. Setting out on foot and ignoring the cruise ship village full of tourist shops and bars, you are in the heart of Basseterre. Centered on The Circus – a non functioning fountain – it is interesting to walk around admiring the decorative buildings, with their gingerbread shutters, while taking in the hustle and bustle of everyday life.

One of the historical highlights of St. Kitts is the UNESCO World Heritage Site of Brimstone Hill Fortress, a lasting monument to the old enmity between Britain and France, from the 18th century. In recent years it has been handsomely restored with a museum and small displays depicting life during those historic colonial times. The vast hill on which the fortress stands is well worth a tour, if for nothing more than to take in the panoramic views.

South of Brimstone Hill is Bloody Point. Here, an estimated 2000 Caribs were slaughtered by joint French and British forces in the 1620s. Further south, heading back to Basseterre, it’s worth taking time to pull into the splendid grounds of 17th century Romney Manor. This is where Caribelle Batik has their main studios, printing vibrant colors onto T-shirts, silks and cottons.

For those with a penchant for trains, there is the St. Kitts Scenic Railway. The train tours part of the island on the old plantation tracks. Passengers are then transferred to a bus to complete the rest of the journey. The train takes you from just south of Basseterre, goes east and then north, and eventually joins the bus on the west side of the island. You may even get to see the Green Vervent monkeys bought over from Africa by the plantation owners. It’s a unique, picturesque journey (serving complimentary drinks and snacks), if your ears can tolerate the screeching of the wheels on the worn tracks.

Neighboring Nevis is the smaller, more tranquil island to the south, where beautifully restored plantation houses offer shady relaxation. Of historical value, it is the birth place of Alexandra Hamilton, one of America’s founding fathers, and where the infamous Lord Nelson of the British Royal Navy was stationed when he met and married Nevisian Frances Nisbet in 1787.

The main anchorage is at Pinneys Beach, where you can take one of the many moorings. The capital of Charleston has a cute little waterfront leading back towards the town, which offers some of the best examples of Georgian stone buildings in the Caribbean. Of notable interest is the Museum of Nevis History where Alexandra Hamilton was born, and the Museum of Horatio Nelson.

The island is renowned for its nature trails and hikes, whether it’s a short walk in one of the plantation grounds or a strenuous hike to the top of Nevis; it’s a perfect way to get to know the island. Another way is to take a taxi tour around the one main road that circles the entire island. Take in the hot water springs by Bath House, the first hotel to be built in the Caribbean in 1778. Admire the historic church where Nelson was married, or the first Anglican Church established in the Caribbean. Check out the old plantation houses and sugar mills, which have been elegantly renovated into fine dining restaurants or up-market hotels. When the exploring gets too much, take your boat around to Oualie Beach and relax. Oualie Beach Hotel lets you enjoy their facilities of dingy dock, loungers, shower and WiFi, if you eat ashore in their restaurant.

St Kitts and Nevis are imbued with a natural beauty that can’t be equaled; barely touched by modern development they are a nation whose history is still visible today. Lush tropical climate, stunning beaches; colonial remnants and a laidback atmosphere all join together to form an unforgettable experience.