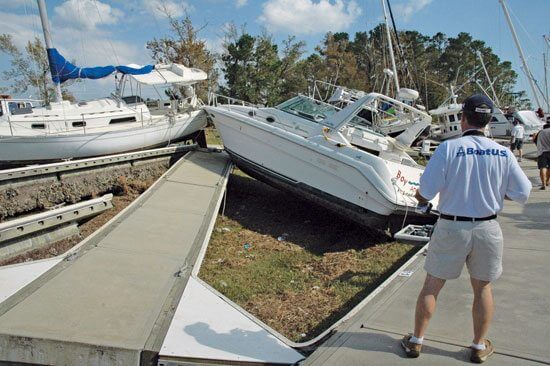 Tharâ€™ she blows! Leading forecasters predict a very active hurricane season for 2013. Colorado State Universityâ€™s Hurricane Forecast Team expects 18 named storms between June 1 and Nov. 30, nine of which are expected to become hurricanes with sustained, low-level winds at least 74 mph. These experts anticipate four of those hurricanes to evolve into intense (category 3-5) blowhards. The season got off to a quick start with two tropical storms forming in June.

An active period is expected to continue for another decade or two as Atlantic hurricanes go through multi-decadal cycles followed by quieter time frames, similar to the quarter century periods of 1970-1994 and 1901-1925.

While individual hurricane landfall events cannot be accurately forecasted months in advance, the total seasonal probability of landfall can be predicted. The entire U.S. coastline has a 72 percent chance of having at least one major hurricane hit land this year. Average landfall for the last century was 52 percent.

Three climate factors that strongly control Atlantic hurricane activity are expected to come together to produce an active or extremely active 2013 season: continuation of the atmospheric climate pattern, which includes a strong West African monsoon that is responsible for the ongoing era of high activity for Atlantic hurricanes that began in 1995; warmer than average water temperatures in the tropical Atlantic Ocean and Caribbean Sea; and the fact that El NiÃ±o is not expected to develop and suppress hurricane formation.

Weaker wind shear, warmer Atlantic waters and conducive wind patterns coming from the Atlantic also contribute to the oceanic and atmospheric conditions in the Atlantic basin to produce more and stronger hurricanes, but it only takes one weak, slowly-moving category one storm to wreak complete havoc with a potent storm surge and cause widespread coastal and inland flooding (remember Isaac?).

â€œThere were five hurricane seasons since 1949 with characteristics most similar to those listed,â€ says Philip J. Klotzbach, a research scientist at the Department of Atmospheric Science at Colorado State University.Â  â€œThese five years are 1961, 1996, 2005, 2007 and 2011. We anticipate that the 2013 hurricane season will have activity in line with what was experienced in the average of these five years.â€

With the devastation of Sandy still fresh in everyoneâ€™s minds, itâ€™s important to note that tropical storm and hurricane impacts are not limited to the coastline or to the Gulf of Mexico. Hurricanes absolutely will travel up the east coast to highly populated areas like New York and New Jersey. Strong winds, torrential rain, flooding and tornadoes often threaten inland areas far from where the storm first makes landfall.

Forecasting Accuracy
â€œThe track or direction for forecasts has greatly improved in accuracy over the past 10 years,â€ says Tim Osborn, regional navigation manager for the office of coast survey for National Oceanic and Atmospheric Association. â€œBut the intensity of the storm and the timing are a little less accurate.â€

Each year millions of coastal residents become glued to the tube, following that little black line that tracks the stormâ€™s direction, its intensity, and how long it will take to hit ground zero. However, myopically focusing on that black line clouds perception if your boat is 100 miles away.

â€œKatrina landed on the Louisiana/Mississippi border, but impacted boats as far away as Bayou La Batre in Alabama,â€ Osborn says.

â€œGet 100 miles away from where itâ€™s coming and then double that distance,â€ Osborn says. â€œA hurricane affects 100 miles of coastline and Wilmaâ€™s circular motion covered three counties, from its center, 50 miles in every direction.â€

Marine Safety Information Bulletins are issued with NOAAâ€™s projected timeframes 96 hours prior to landfall. MSIBâ€™s are based on the storm path and projected impact and are revised every 12 hours. Private boat owners should not be on the water when the port and waterways are closed. Some bridges are closed when winds reach 25 to 35 miles per hour.

Billions in Marine Damages
Damage to recreational vessels as a result of Hurricane Katrina exceeded $1 billion. Only about $400 million of those damages were actually insured. Katrinaâ€™s losses far surpass 2004â€™s hurricane total of about $330 million in damages, as well as the $500 million in losses attributed to 1992â€™s Hurricane Andrew, which was the single, most costly natural catastrophe to affect recreational boating until Katrina. Three-fourths of the marinas along 150 miles of the Gulf Coast were destroyed in Katrina.

The overall catastrophic economic impact of Hurricane Katrina is nearly incomprehensible. â€Insurers paid more than $80 billion to 1.7 million U.S. policyholders in six states after Hurricane Katrina struck in August 2005,â€ says Klotzbach, who estimates the cost of Sandy to be less, at about $50 billion.

Wind and Waves
The worst day of the hurricane season is historically Sept. 10, with the month of September producing the most storms during the August-October peak season. Seven of the 10 most expensive hurricanes in U.S. history occurred between from August 2004 and October 2005: Charley; Ivan; Frances; Jeanne; Katrina; Rita; and Wilma.

Regardless of the forecast, the storm that actually hits is the one you need to be prepared for, so you must take every storm seriously. Building codes for wind damage changed and improved after Andrew, but the lesson learned from 2012â€™s Isaac is that even a minimum, slow-moving tropical system can produce a potent, strong surge rendering low-lying, coastal areas completely helpless.

â€œIt doesnâ€™t matter how many hurricanes are named and the category of the storm has nothing to do with the damage caused,â€ Osborn says. â€œIf you are hit by one slow moving storm that has a huge storm field and are exposed to open water conditions and are not protected by a good levee system and are in a low lying area, storm surge will come to your front door. There is a threat with coastal flooding penetrating inland and taking out housing with low elevation. Isaac was a shocker with big time damage in southeast Louisiana.â€

Osborn morosely reminisces on Katrina, which turned from a cat 2 to a 5 in 24 hours and Ike, which never went past a 2 but kept growing in size, producing a 19-foot surge.

The slow progress of a storm and its large size are the major factors to watch in the amount of storm surge and flooding.

â€œIsaac was a real wake-up call â€“ a big shocker,â€ says Osborn. â€œLaPlace, Louisiana had 7,000 homes under water from Isaac. How these storms react in an area is very important. Weak systems can be very problematic. Almost a year later, we havenâ€™t recovered much from the Isaac experience and those same homes are still vulnerable.â€ 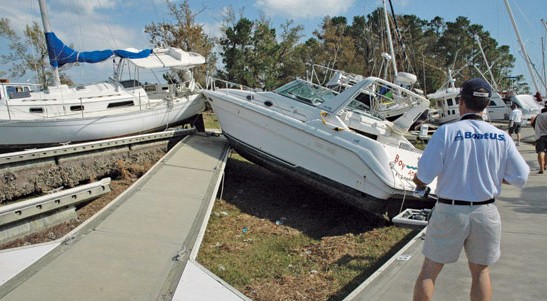 A hurricane has two elements: wind and waves. Remove one of those elements and your vessel has a better chance surviving the storm.

Itâ€™s difficult to remove the wind element, but you can move your boat out of the water or away from the range of the storm surge to mitigate the wave element for better odds of escaping damage.

If youâ€™re at sea and the storm is coming from the east, try to get to the westerly side before it comes close or beeline for a hurricane hole. Thatâ€™s a place to safely moor your boat where it will be sheltered from the wind and sea.

If youâ€™re not at sea, get inland or on the hard with anchors in the ground. â€œIf you tie down the boat, it wonâ€™t tip over,â€ says Capt. Dean Kubitschek of Fort Pierce Municipal Marina.

Even if the vessel does fall, it will still fare better than banging against a concrete dock for hours. In the battle of fiberglass hulls versus concrete docks, concrete always wins. Boats stored ashore on high ground are far more likely to survive than boats in the water. If possible, have your boat hauled by the marina. Trailerable boats should be relocated and secured as far as possible above the anticipated storm surge.

Sometimes boat yards upriver offer annual contracts for storm haulouts. The farther inland you can get, the better off you are. However, donâ€™t wait until the last minute to find a yard. Itâ€™s first often come, first served.

If you must leave your boat in the slip where itâ€™s normally docked, review your dock contract for language requiring you to make certain preparations when a hurricane threatens. Ask the marina manager about their hurricane plan. You should also have a hurricane plan for your own vessel to avoid last-minute improvisation.

Many insurance companies now require boat owners to provide a storm plan. Make sure you do what your plan says youâ€™re going to do. If not, your hurricane claim may not be paid. (See this monthâ€™s Legal Lines column for more insurance tips.)

â€œIf you value your boat, buy a new set of lines for $150,â€ Capt. Kubitschek recommends. â€œDo the math. The deductible on a boat is 10 to 20 percent of the value of the boat. Lots of boaters are too damn lazy to replace worn lines on a vessel that costs $50,000 to $200,000 and then pay thousands in claims and aggravation.â€

Double up the lines and use your bow lines, stern lines, spring lines and breast lines. Put out a bow and stern anchor or even a double bow anchor. The more scope in the lines, the better. That compensates for the rising and falling of the tide and the long scope allows the vessel to move with the surge while staying on station. If the lines arenâ€™t long enough, with adequate scope, theyâ€™ll rip off the cleat on the dock or rip off the cleat on the boat or even capsize the boat.

Take a moment to look at the dock. If the cleats have no backing, youâ€™re in trouble. Few boaters climb under the concrete dock to see if the bolts are secure in the first place.

Consider disconnecting shore power before the storm hits, with a fully-charged battery. Turn off all breakers except the bilge pump. If youâ€™re on a concrete floating dock, use some anti-chafing protection at the eye on the cleat of the dock.

Take down all bimini tops and stow all cushions. Bimini tops are not constructed to withstand hurricane force winds and are a common cause of needless damage.

Anything that can become a loose projectile should be taken down and stowed.

Secure all hatches and duct tape them down. Just because the hatches are closed doesnâ€™t mean theyâ€™ll stay closed in the wind. Remove and stow poles from bimini tops or secure them with wire ties or duct tape a few days before the storm.

Document the efforts to secure your vessel. â€œVideo or photograph your marina and how your boat was tied up,â€ Kubitschek advises. â€œShow that your boat was in a desirable slip, in case of catastrophic damage. If you damage a dock, you and your insurance company are responsible.â€

Sailboats that leave furling jibs up wonâ€™t get relief from insurance companies.

â€œIdeally, if a vessel is not being used, the owner should remove the sail from the roller,â€ says Steve Bogner, manager for City of Miami Beach Municipal Marina. â€œAs furling jibs get older, they develop little concave pockets and air trapped in the pockets works the sails loose. Once the wind is in the jib, itâ€™s going to go up.â€