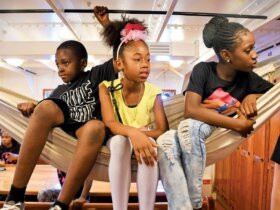 Boat builder for six decades, artist for a lifetime

Curt Whiticar, who turned 101 years of age February 13, has a quick smile and the ability to recall life 95 years ago just as well as yesterday. He has a few age-related ailments, such as bad knees and ankles, forcing him to rely on crutches some of the time, and macular degeneration in one eye, for which he receives an occasional injection. His driver’s license is renewed each year and Whiticar often drives to the local flea market on Saturday morning.

He built his first boat at the age of 12, a hobby turned career spanning more than 60 years. His lifelong love of painting began in earnest as a young pre-teen and continues to this day.

Whiticar was born in New Jersey, where his father, Addison Whiticar, or ‘Captain Add’, as he was known, worked as a charter boat fisherman in the summer and an oysterman in the winter. When Curt Whiticar was six, his dad, tired of the cold, freezing and miserable job of oystering, moved the family to Stuart, Florida. He and his younger brothers Johnson and Jack grew up spending summers on the Delaware Bay and winters on the St. Lucie River.

“I had four or five bathing suits,” said Whiticar, “and that’s what I lived in all year round.”

“I’ve always been a little more ambitious than some people my age,” said Whiticar of his youth. “I had a paper route and I made fishing rods, which Dad sold to his charter customers.”

“I made a long-bed lathe,” said Whiticar, “then put the 16-sided rod on the lathe to sand them until they were smooth.”

He used colored silk thread to make the guides and varnished the finished product.

It was a common sight to see fishing boats pulled onto the beach at high tide so their names and homeports could be repainted during low tide. Whiticar, who started re-lettering his dad’s boat when he was 11 years old said, “I did a better job than most for some reason.”

Wanting to improve on his newfound skill, Whiticar watched a professional painter, who shared his secret of using a red-sable brush. “I think it was imported from Russia,” said Whiticar. “He was getting ready to retire the brush and offered it to me for one dollar,” said Whiticar. “I rushed home and raided my piggy bank.”

Captains and owners of other boats and local hotels quickly commissioned Whiticar, who said he was able to save “quite of bit of money each summer. I’m pretty frugal.”

Whiticar drew the plans for his first boat, a 16-foot, flat-bottom skiff in 1922 and built it over the winter in Stuart, Florida. “It had a one-cycle Briggs and Stratton engine,” said Whiticar. “I had to stay in the River, but I wanted to fish in the ocean.”

When he returned to Fortescue, New Jersey a year or so later, Whiticar built a 20-foot, V-bottom, smooth-planked boat from plans he found in a magazine, and put a used 12 hp outboard engine on it. When the charter fishing boats returned at low tide, Whiticar met them at their moorings and carried the clientele and their fish back to shore. He earned fifty cents from the captains and tips from the fishing party.

By the time Whiticar graduated from high school, he had upwards of $300 in the bank, but needed $450 tuition to attend Bliss Electrical School in Washington D.C. Captain Add made up the difference and Whiticar graduated in 1931 with a degree. He took a job installing phones for Western Electric in New Jersey, earning $19.95 per week. “Room and Board cost $12 a week, plus my transportation costs and incidentals,” said Whiticar, “so I was barely getting by.”

It was during the depression and Whiticar decided to “come back down to Florida,” as he wanted to go into business with his dad or have his own boat for chartering and fishing. By the late 1930s, Curt and his brothers, with their “second-hand sport fishing boats,” joined the business, for a total of seven boats in the Whiticar Fleet.

Curt Whiticar, who studied marine architecture on his own time, designed a 34-foot single-screw sport fisher. He wanted to build the boat in Stuart, but had no land. He contact Mr. Mills from Dover, Delaware, who owned the property next to his dad’s on Willoughby Creek with the hope of just using it. Mills, who purchased the land for $5,000 just before the “big bust and Depression,” was suffering and wanted to sell. Curt had $550 from his summer chartering business in New Jersey. He used it all to buy the property. In 1937, he built Shearwater, named after the long-winged oceanic bird, “where my bedroom is now.” It is said to be the backbone to the design of the modern Whiticar sport fisherman of today.

In 1939, Curt became engaged to Elsa, a first-generation Norwegian girl from South Dakota who moved to Stuart. That winter, Whiticar had a house started on the property, which included the walls, ceiling and roof. He and Elsa were married in the unfinished living room. They moved into the house later the following summer when the floors were finished.

Whiticar bought the vacant land on the other side of his dad’s property from his uncle in 1947, where the Boat Shop stands today. He purchased a used 70×90-foot Army mess hall building at Hobe Sound, dismantled it piece by piece, salvaging the windows and doors. He made a gin pole to lower the trusses and reconstructed the building at the new site. Whiticar Boat Works was officially in business.

The first boats built in the new shop were Hobo, a 38-foot sport fisher for his youngest brother Jack and a 26-foot sea skiff for another customer in 1954.

The company grew. Employees were added as bigger and better boats were built, and Curt and Elsa had three children, Laura Kay, JoAnne and John. Elsa’s brother, John Dragseth was brought into the business as a partner. Nephew Jim Dragseth and son John are the current President and Vice-President, respectively.

Since his retirement in 1986, Whiticar found time for golf and painting. And a little boat building. In 1999 Steve Hero, who recently purchased a second-hand 24-foot Whiticar boat, approached him. He asked if Curt would build a duplicate of his original 16-foot flat bottom skiff, which Hero said he could trailer to fish in the lakes.

Whiticar agreed and took three months to build the boat himself, at the age of 88, under the carport in front of his home. “No one else helped with the construction,” said Whiticar. Hero named the boat Curtis.

Today, Curt Whiticar spends much of his time in front of and easel or in his carpentry corner of the boatyard making picture frames. “I average one painting per week,” he said, “but I can finish one in three days if I work on it full-time.”

To date, Whiticar has more than 1,300 paintings to his credit. Many hang in the offices at the boatyard and in his home. He has gifted many to his children and grandchildren and most are in storage.

“I donated a painting with egrets and blue herons in flight to the Maritime and Yachting Museum for a fundraiser and it brought $1000,” said Whiticar. He has loaned tools and paintings for display at the museum.

“I wanted to paint all my life,” said Whiticar. “I was just too busy most of the time.”

Kathy Enzerink makes her home in Oriental, NC, when she and her husband Gerry are not sailing on Sea Bird. She is a free-lance writer, journalist and publisher of children’s coloring books. Contact her at [email protected].

Kathy Bohanan Enzerink
View More Posts
Kathy is a freelance writer who lives in Oriental, NC and is a frequent contributor to ALL AT SEA. You may contact her at [email protected]