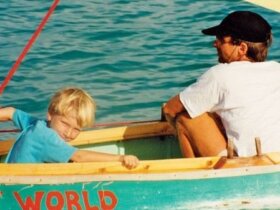 Casting Off With Kids

In the ‘60s and 70’s charter boat pirates were a unique mixture. Very few such as Fatty Goodlander grew up on a boat and inherited the love of the sea. Some were city-born professionals, others grew up in small towns near lakes or rivers. Regardless of their diverse backgrounds, their passion for sailing, adventure, and new challenges made them scrape enough money together to buy a boat and sail to St. Thomas to try the charter trade.

Some came by it through a number of misadventures. Take Tony Gibbons, born in Bristol, England.  At 16 he went to a sheep station at Waggawagga in New South Wales, Australia to become a jackaroo. A cool cat, he took about 60 years to go through his nine lives.

Life no. 1: Driving seven old ladies in a 1947 Mercury V8 on a back road in Australia, he was crossing a railroad track where a train slammed into the car, taking the front wheels and the engine off. Nobody was hurt.

Life no. 2: Back at the ranch he had a fight with a sheep shearer, was stabbed and sewed up with twine.

Life no. 3: In Sydney his s tomach pain was misdiagnosed and he almost died of peritonitis. Having survived three close calls before he was twenty, Tony went back to England and for twenty years made a good living as a jazz singer on radio and TV. But life became too tame and he turned to the sea.

Life no. 4:  Around 1965 Tony bought Liz, a 35’ Alberg wooden yawl, and started chartering from St. Thomas. Beginning a charter with a congenial couple aboard, he tacked toward St. Croix on his way to St. John. Someone smelled gasoline below so Tony lifted a floor board to check the bilges. The boat blew up and blasted off the cabin, the deck and Tony into the sea. All four climbed into the untouched dinghy and were rescued by the Leonardo De Vinci cruise ship. Tony was so badly burned that the attending physician, Dr. Kuane Kim, had Tony flown to a New York City hospital with a burn specialist named Susan.

Two years later Tony bought Escrimador, a  45’ wooden gaff-rigged ketch and sailed Susan back to St. Thomas where they were married in Fort Christian.  On the street they happened to meet Dr. Kim who did not recognize Tony. “I’m the guy that got burned when my sailboat blew up. You sent me to New York two years ago,” Tony said. “Oh! Now I remember. But you were so badly burned that I couldn’t tell if you were black or white!”

Life No. 5:  One day Tony was trying to paint the topsides of Escrimador in Elephant Bay by the Sub Base but it was too rough. Deciding that Krum Bay where the power plant was located would be calm, he asked the Coast Guard the height of the power lines crossing the bay. He was told that they were about 60 feet high. Escrimador’s foremast was 52 feet high, so Tony and Susan powered in. Just before they came to the power line, Susan, who had been holding onto the forestay, happened to take her hand off of it. Tony was at the helm and had just removed his hand off the throttle when the forestay hit the wire. With a tremendous BANG the rigging vaporized, the chain plates were blown out, as was the caulking around the masts, and the electronics fried. WAPA, the power company, refused to turn off the power unless Tony dropped all charges.  Jean Archi, a man of all trades, brought in a barge, half-sank it and pulled Escrimador out on her beam ends. Eventually Tony got about $1500, a bare drop in the bucket for the costs of repairing the boat.

Life No. 6: About 1975 Tony may have felt that two sea disasters were enough. He sold the boat and bought a house in Florida. But a friend prevailed on him to help bring back the sailboat and the body of a girl who had sailed to Port of Prince and been murdered. Lengthy negotiations by Tony secured the release of her body onto a plane to Fort Lauderdale, but the boat, still afloat, had been impounded. One dark and stormy night, Tony and a friend swam out to the boat at two a.m., cut the rode and sailed away. The next day the police chased them and shot at them, putting holes in the sails and busting the back stay. Evidently deciding it wasn’t worth the trouble, they went away and Tony was able to nurse the boat back to Fort Lauderdale.

Life No. 7:  Firmly on land again, Tony was helping rebuild a house. Working on the peak of the roof, he fell three stories off into an aluminum awning. This broke his fall and his only injury was a banged elbow.

Life no. 8:  But the boat bug was still biting Tony and from 1992 to 1999 he built the new Escrimador, a 65’ glass over mahogany ketch. On his way to the Virgins to charter again, he stopped in Black Sound at Green Turtle Cay where Hurricane Frances bounced the boat on the beach. Pulling it off and patching it as best as he could at the ravaged island, he was able to broad reach back to Fort Lauderdale where the boat almost sank at the haulout dock. After much hard work and money the boat was ready to sail again but the sea didn’t make it easy for Tony, as it was a hard passage down to St. Thomas in July of ’05.

By now, you may have decided that Tony was a hard-luck guy. All of his eight lives was mostly a struggle with the sea. And just to put the cake on it, when Tony was helping Les Anderson with the mast of his sloop Penelope this year, its mast fell down on top of Tony!

Life no. 9: But none of these misadventures has deterred Tony from the sea for very long. Last April he left with Escrimador to sail either to England or maybe through the Canal to the Galapagos, Easter, Pitcairn and Henderson Islands. Not far from the Virgins the sea got him again. The boat rammed into a sunken container and sunk. Tony was rescued and flew back to Florida. He remains undaunted at a youthful 76, determined to go to sea again soon. He is fond of this quote from a sailor: “How far is the land to which this boat would go? Far, far away is all I want to know.”