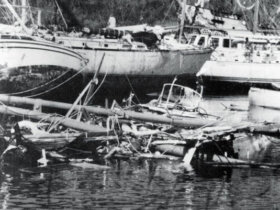 Why do most of us go to sea? For adventure – gosh, where did
that reef come from! For the challenge of crossing oceans – yeah, we were doing
at least 26 knots in that storm! For the sheer pleasure of being at sea – the
seasickness, the dinners that end up on the cabin sole, getting lost!
Also as a means of making a living by taking people sailing on
passages.

There are
two ways to charter your boat on ocean voyages; 1) take crew that pay but also
work or 2) take paying guests who do not work. The big advantage with working
crew is that you don’t need any other professionals than yourself. The
definition of a professional is loose, that is, someone who knows that the bow
is the pointy end and the stern, the square end!

The
disadvantage of having crew or guests along is that because they arrive on a
specific day, you have to be ready to go and keep to your proposed schedule or
nearly so. Another down side is that you may not always be able to start within
the best weather window.

Still, having to leave on a certain day means that you can’t
procrastinate. Of course you want the boat to be perfect and ready for
anything but it ain’t never gonna
happen. Besides, you need to sail before
you run out of money.

Mike’s brother, Nick, and our sailing friend, Warren Giss,
were deadheading with us on Avenir, our twin-diesel ketch,
from Newport,
R. I. to Bermuda. We had recently finished a
charter for the America’s
Cup Races in September 1967. At Bermuda
we would pick up some of our Fort Worth sailing
buddies as paying crew for the trip to St
Thomas. The weather looked good and it was a straight
six-hundred mile shot to Bermuda except for some allowance for the thrust
eastward by the Gulf Stream.

Autumn may bring all sorts of weather and
sure enough, we encountered a gale and big seas about three hundred miles out.
We shortened down to a jib and reefed the mizzen but the wind was head on and
shoving us north and eastward, essentially backwards. We needed to go
southwest.

Things
had immediately started to go wrong. The generator stopped working so all the
food in the frig had to be thrown overboard. When a
large pod of pilot whales surrounded us, we stopped the engines. Afterwards the
port engine wouldn’t start. Then the other developed a water pump leak.
The seas got bigger.

One rough
night I fixed stew, thinking it would be easier to eat. Watching that stew slop
around didn’t help queasy stomachs. When
Warren lit a cigarette, the smoke made us all
charge out of the main salon for the deck. From then on there was a new rule:
no smoking below!

The
washing-machine waves made steering difficult. On one very dark, wet night a
freighter came too close for comfort and our helmsman got confused and headed
up toward it, stalling the boat. Mike rushed up to the deck and yelled,
"Fall off! " Fall off!"

The
freighter slithered by, flashing morse
code and in the commotion Warren
ran up on deck dressed only in his skivies. He
started to fling himself over the rail. Fortunately, I grabbed him by his,
er…pants and cried, "Not yet, Warren! Not yet!"

In the
morning, we realized that we were losing a lot of ground and that we might not
make Bermuda at all. The batteries were going
down and we were still engineless. Better to retreat while still ahead and
alert our friends to meet us in Newport
instead.

Luckily,
we got the message to them and turned around, arriving in
Newport at two in the morning. Ghosting
quietly under sail we came alongside the dock near the brigantine
Black Pearl and the restaurant named
after it.

We
learned one important lesson on this sea trip: Always arrive in port
before the bars close!