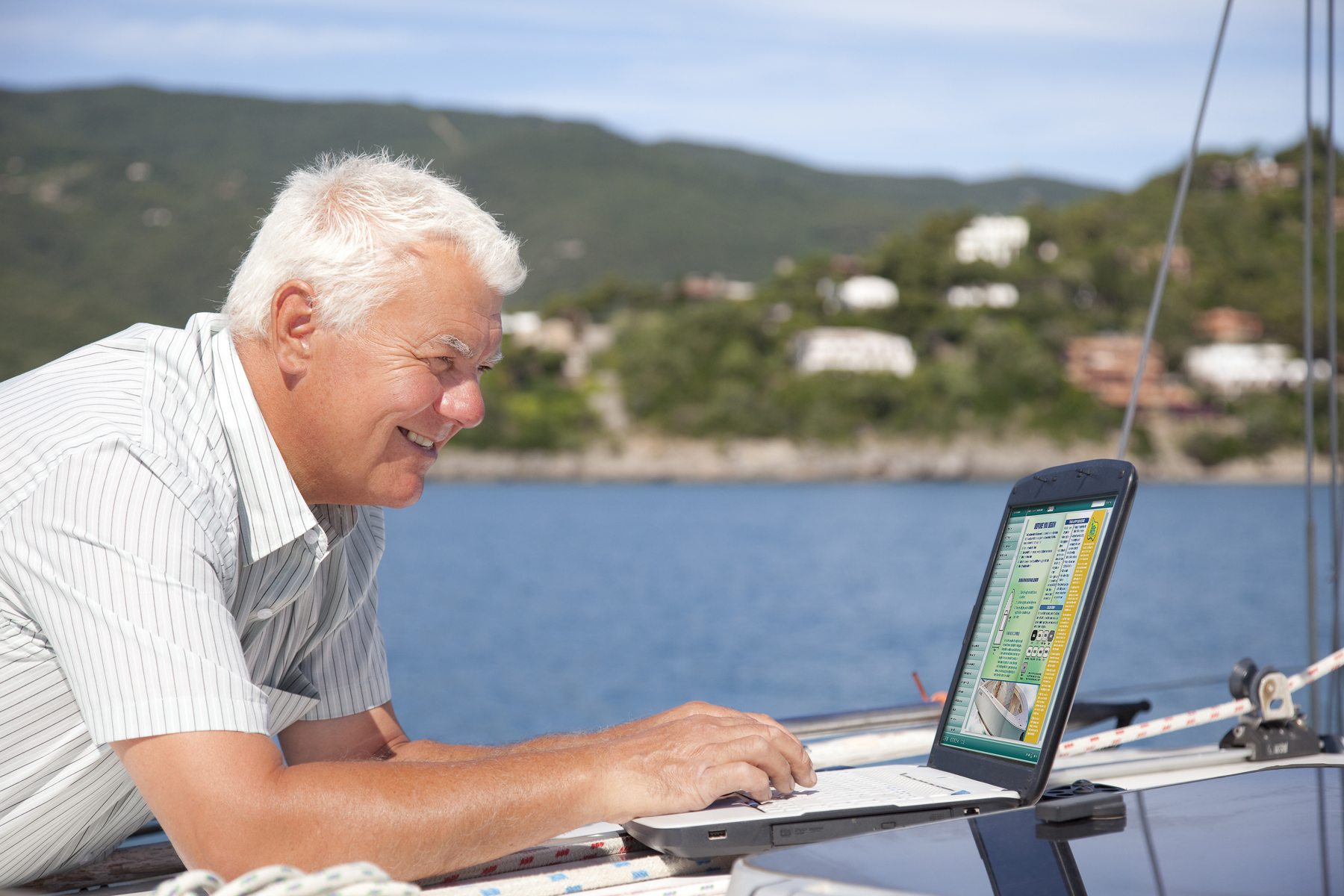 ‘Tis said that there are those who are born sailors who know instinctively, or perhaps it is bred into them, the “feel’ of the helm.  One of those sailors was Bill Slocum.  It didn’t hurt that Bill happened to have the last name of Joshua Slocum, one of the most famous sailors of recent times. Bill also honed his nautical skills at the San Francisco Maritime Museum where he learned to restore, build and finish vessels.  But you can’t keep a born sailor from the sea for very long, so Bill took to chartering.

In 1965, he and his first wife Lyn operated Caravan, a 50 foot S&S ketch motorsailor out of St. Thomas. In 1967 Bill purchased Firebird, a 58-foot Alden schooner built in 1930 with a classic gaff-fore and Marconi main. A year later, after Bill and Lyn divorced, Bill took over Carina, a beautiful Rhodes 56-foot ocean racer. He married Kitty Yoder (now Eaton), his cook/mate who had worked with him on Caravan and together they ran Carina, then Firebird, in 1969.

While Bill was captain of Firebird, Mike and I had recently arrived in St. Thomas. We took great pleasure bordering on awe in watching Bill sail Firebird into her slip on the leeward dock by Freddie’s Bar at Yacht Haven. Approaching the slip upwind Bill would have all sails down except the main and jib. He would expertly flip Firebird through the wind with the mainsail drum-tight, drop the jib and with just the right amount of way on and a spring line on the piling to starboard, pivot stern-first into the slip. The foredeck crew was spring line flipper and would keep Firebird’s stern from hitting the dock.  It was neatly done and was the highlight of the afternoon for many of us.

By July ’69, Bill lost Firebird back to the former owner. He had long wanted to build a 40-foot double-ended Tancook whaler and in September began lofting in the palm grove by Yacht Haven. Tancook whalers were first built in the 1860’s at Mahone Bay, Nova Scotia. Their lines were crisp, they sat low in the water, and had a most comely sheer. The rigging was simple and designed for maximum power with a jib, gaff fore, gaff main and no auxiliary power.

Those of us who watched Bill and Kitty build their boat were entranced with Bill’s fine workmanship and ability to “eye” the lines. A day was not complete unless we stopped by Bill’s boat at least once to ask how things were going. The reply was always “jus fine.” It became the perfect name for the boat. Jusfine was launched a year later and Dave Stein towed her to the Lagoon where Bill and Kitty worked on her hull and rig. Tying up at Hassel Island later, Manfred Dittrich made the sails while Bill finished their project. Since Bill Lemon also lived on Hassel Island, Bill changed his name to Brett because he and Lemon agreed that one ‘Bill’ on the island was sufficient.

Bill, with Kitty or other crew, did a lot of Caribbean cruising on Jusfine.  In 1973 after Kitty divorced Bill, he delivered the boat to a new owner in New England but the sale fell through. In November Bill and crew left Padanarum, MA for St. Thomas. A North Atlantic gale caught them on their way to Bermuda. They never arrived and no wreckage of Jusfine was ever found.