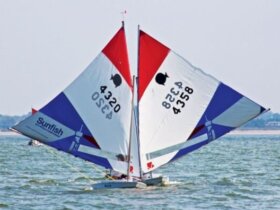 True, you have to have talent. A lot of it is surely a plus. But when it comes to mounting an Olympic sailing campaign, it takes a lot of money and planning too. Just ask St. Thomas’ Anthony Kotoun and Cy Thompson, who hope to make their first bid in a 49er come 2008 in Beijing, China.

Thompson was born and raised on St. Thomas and Kotoun grew up there.  Both were on the water before they could walk and both caught the passion of competitive sailing early.

For Kotoun, it was racing in the Caribbean, New England, and in college on a national level that led to his high-point accomplishments of J/24 Midwinter Champion and 12-Meter North American Championship, both achieved in 2006. Currently he’s a professional sailor who divides his time between the Virgin Islands and Newport, Rhode Island, and travels the global racing circuit.

For Thompson, a college student in Rhode Island, career highlights include winning the White Fleet in the U.S. Optimist Nationals at the age of nine, topping the Laser Radial fleet at the U.S. Youth Championship in 2004, and being awarded a Gold Medal at the Caribbean and Central American Games in Laser Standards last year. Launching an Olympic campaign seemed an obvious and logical progression for the two sailors.

“The Olympics are one of the highest pinnacles of the sport. As a passionate sailor and competitor, you have to want to achieve at the highest level,” says Kotoun.  About the choice of boat, he adds, “It was time to move on from the J/24—and the 49er is fun and exciting. Advantages-wise, it rewards physical skill and a different skill set than most boats. The boat goes faster than the wind on all points of sail under 12 knots. The disadvantages are that it rewards experience in the boat.”

Kotoun and Thompson officially launched their campaign with a practice session together in Florida last December, a date and place where they also received their first donation. The pair’s first event together was the 2007 Olympic Class Regatta in Miami, Florida in February, where they finished 34th. The Virgin Islands launch for the men’s campaign came in March, when the Ritz Carlton donated use of their new beachfront restaurant “Sails” for a fundraiser. At this event, Kotoun gave a presentation about the team’s goals and challenges.

“There are 19 49er slots at the Olympics and the host country, China, automatically gains an entry, so the rest of the world battles for the other 18 slots,” Kotoun explains. “Thirteen of these were allocated at the 2007 ISAF World Championships, in Cascais, Portugal, held in July. The remaining five will qualify at the 2008 Worlds in Australia in January.”

Portugal proved a tough training and competition ground for the Virgin Islanders. Thompson explains, “We headed to Portugal three weeks early to train. Winds were light up until about nine a.m., and then it was 20-knots plus, survival conditions the rest of the day. Of course when it came time for the actual regatta, the winds were really light and shifty. Not great conditions.”

The Virgin Islands duo was definitely up against stiff competition. There were former gold medalists in the 49er from the Ukraine, Spain, and Great Britain.

“In one race, we were second with one leg to go when the race was called off,” Thompson says. “In another race, we had a top five finish. We also had some pretty good starts coming off the line. But speed and experience in the boat really showed among the other competitors.”

That said, it is speed and time in the boat that Kotoun and Thompson have planned for this fall. Mid-September, they’ll head to California, train with the U.S. 49er team and compete in the 49er U.S. Nationals.  After that, the next big regatta is the 49er Worlds in Melbourne, Australia. This is where the last five Olympic slots are awarded.

To make this campaign happen takes equipment, practice and money. “We need three boats, two of which are very competitive and one for domestic training. We need a coach and a coach boat as well as multiple masts and sails. The boats, coach, coach boat, masts and sails, plus travel and housing adds up to about $180,000,” Kotoun says.

This money will come from a variety of sources, many of which are private donations, as well as some funding from the Virgin Islands Sailing Association (VISA).

To Kotoun and Thompson, the pursuit of Olympic Gold is driven by something much simpler. “Purity,” says Kotoun. There’s a huge sense of accomplishment to be the best in the world at something you love.

Made of fiberglass and carbon fiber to be strong and light, the 49er weighs 275 pounds when fully rigged and is priced around $18,000 brand new. The relationship between skipper and crew is critical on the 49er, perhaps more so than on any other Olympic boat. Going so fast on the edge of control means that one slip can mean capsizing.

Designed in 1994 and selected in 1996 as the new ISAF one-design two-handed skiff for the Olympics, the 49er now numbers in the middle 800s in 48 countries. The class debuted in the Olympic Games in Sydney in 2000 and was re-selected for Athens in 2004 and Beijing 2008.

The 49er is an open class, available to both men and women, with competitive sailing offered in a weight range from 320 to 360 pounds (combined crew weight).  Class rules, international schedules, and general class information can be found at www.49er.org

Caribbean athletes need financial support to make it to the Olympics.  To support the athletes in this month’s “Countdown to Beijing,” make checks payable to:

Donations are tax-deductible in the U.S. and U.S. Virgin Islands