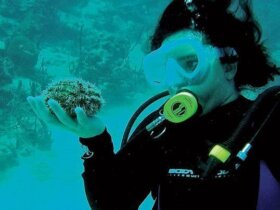 How to Find a Good Dive Buddy

Straight out of a scene from science fiction, our dive boat skirts the edge of a perfect circle of deep blue. Just below, a cylindrical cavity in the reef reaching to a depth of over 400 feet, known as the Blue Hole of Belize, beckons from the unknown.

Jacques Cousteau considered the Blue Hole one of the top ten dive sites in the world. The gigantic limestone sinkhole is surrounded by a hedge of reef, except for two narrow passageways, spaced about 90 degrees apart. There is a diver among us that opts for the snorkeling excursion along the edge of the reef. He’s had a mild bout with decompression sickness in the past and doesn’t feel comfortable with the deep dive.

Your lungs don’t absorb only oxygen; they also allow other gasses, like nitrogen, to pass into your blood. The greater the pressure, the more and more nitrogen gets dissolved into your blood. If you ascend slowly, you can off-gas the extra nitrogen gradually through your lungs. Come up too quickly and the nitrogen literally boils out of your blood, forming gas bubbles; and every cell that is touching a nitrogen bubble is not getting oxygen.

After the dive master conducts a short instructional session on the particulars of the dive, we enter the water and rendezvous on a sandy shelf 45 feet down, on the very edge of the abyss. Visibility is only about 90 feet. The dive master checks to make sure each one of us gives him the ‘OK’ signal: no trouble with equipment or clearing pressure from our ears. We then follow him over the edge and establish negative buoyancy to begin our underwater free fall.

Buoyancy is directly related to the volume of water you displace, so as you descend, the increased pressure compresses the air in your Buoyancy Control Device (BCD), making you sink faster the deeper you go. Once we start to sink, the experience is like sky diving in slow motion; soft corals peppered along the vertical wall of rock grow sparse as the light dims. The deep falls away below into darker hues of blue that never turn completely black; the water chills as only the longer wavelengths of visible light reach down this far.

At 130 feet we check our descent and add a little air to our BCD’s to become neutrally buoyant. The stalactite formations for which the Blue Hole is famous, are but a few yards away and we swim through the liquid cerulean dusk with the same wonder as if exploring ancient underwater ruins. The stalactites, most of which are several feet in diameter, hang in a large recess in the wall, with plenty of space behind them for us to swim around. There is a dearth of life at this depth, compared to the reef above that teems with life. I glance below, and on the very edge of sight notice a few sharks swimming along the wide arc of the cavern wall. A few turns into ten and then twenty, and then possibly a hundred or more as the flat-nosed shadows appear out of the mist, swim past some 80 odd feet below, and then pass out of sight again, following the wall.

It is a short eight minutes at the depth of the stalactite formations, but it seems like twice that. All too soon, the dive master is tapping his watch and giving the signal to ascend. Another quirk of the pressure/buoyancy equation is that as you rise in the water column the pressure decreases, causing your BCD to expand, thus displacing a larger volume of water and increasing your buoyancy which causes you to rise faster. It’s a snowballing effect and, though some find it counterintuitive, you have to let air out of your BCD in order to keep from rising too quickly. Everybody’s dive computer is beeping as we come up, telling us we are ascending too fast. Dive computer alarms are typically calibrated on the conservative side, with a factor of safety figured in, but you still have to take them seriously; decompression sickness kills.

We ascend to a staging point just behind the stern of the boat about 20 feet down, a safety precaution to make sure we are off-gassing as much nitrogen as possible before exiting the water. A few divers high five, but for most of us it is a smile (though it is hard to smile with a regulator in your mouth) and thumbs up, for just having completed one of the most amazing dives in the world.

John Buckland has traveled extensively throughout Asia and draws on his experiences with the people and culture as an impetus for
inspiration in his writing. Buckland received his BS in Mechanical Engineering from the University of Virginia. His novel Seven Days from Darwin is available through Amazon.com and the book’s website www.7daysfromdarwin.com