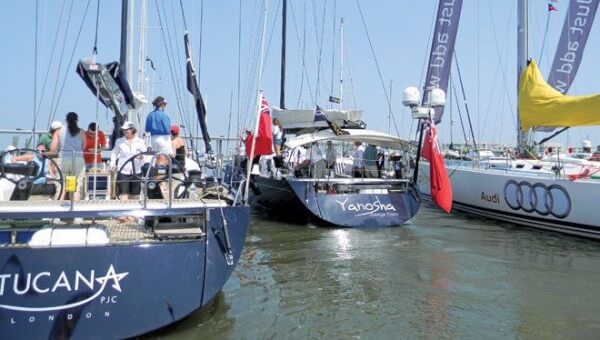 Last fall I met a delightful Canadian couple on their first cruise in the U.S.  Both in their mid 70’s, they had decided they were doing entirely too much sitting in their retirement. So they bought a boat and planned a tour of the Eastern Seaboard, down to Florida and back.

The couple felt they were well prepared in terms of legal requirements for foreign flag pleasure boats traveling in the U.S. They had secured a U.S. Customs decal that was placed as specified on their boat. As soon as they entered New York State, their first official point of entry, they duly checked in with the U.S. Customs and Border Patrol (CBP). They entered their passports and NEXUS cards (a card issued to Canadian citizens by the U.S. declaring them to be “trusted travelers”) into the computer, and received an entry number along with a pleasure cruising permit. Then they were told they would have to repeat that process at every U.S. port.

The Canadians took 30 days to travel to Florida and 31 home, and after their first entry into the country, they experienced mixed results and many frustrations in dealing with reporting requirements. At one port, a CBP official gave them a 2008 brochure, which contained outdated phone numbers and reporting locations.  Sometimes on calling into a port, they were met with confusion on the other end of the line. The captain provided the cruising permit number each time.

A captain who runs a yacht registered in the Cayman Islands also has trouble with the list of phone numbers for CBP offices – “often the numbers are not for the correct person so you may have to call a number of times before reaching the right person.” But he says as long as you have your paperwork in order, you can call in to the CBP. His vessel is checked frequently but “it’s easier since I travel with an all-American crew.”  He adds that the first time you check in, you do have to report to the immigration authorities in person.

I actually experienced some of the same problems. In trying to clarify the rules, I called the number listed for Charleston, a major port. After three phone calls to different numbers given to me each time, I finally reached Steve Switzer, the Public Affairs Liaison for the CBP in Charleston. He provided a sample of a cruising license which clearly states “The master of any non-U.S. flagged private boat MUST REPORT arrival at each port or place at which the boat arrives.”

“Cruising licenses confer the privilege of not having to formally enter, clear, and pay duties and taxes on the vessel at each CBP port…but boats still MUST REPORT their movements from one port or place in U.S. waters to another,” he explained.

A Swedish sailor said he and his wife purchase a U.S. prepaid phone to call the 800 numbers listed for many of the ports, and turn it off when not needed. He thinks CBP offices cannot return calls to foreign numbers. He’s also used the national number. “It may take them up to 48 hours to call back but they do,” he said. He recommends that when you call, “ask where the next place is to report and for the contact number.”

He found “the custom officials to be very helpful, generally,” but the problem comes from the way different CBP districts interpret the reporting. “Some just want you to check in when you leave the district while others want you to call every time you move the boat…even if you just re-anchor across the harbor.” The Swede’s solution is to always leave a message and record it in the ship’s log. That way, “if you’re questioned, you can say you made the effort to check in.”

Not complying with these rules can be costly with fines of $5,000 for the first violation and $10,000 for each subsequent violation. In addition, the boat could be subject to seizure.  The Cayman-flag boat is checked often and the Canadian boat was boarded twice during its journey. Switzer said the CBP officers also visit marinas and ask people on boats where they are from. “We’ve issued a number of warnings.”

Anyone, including U.S. citizens, entering the U.S. by boat from a foreign port must report their arrival immediately to the Customs & Border Protection (CBP) and provide them with:

All private boats 30 feet or longer entering from a foreign port must pay an annual processing or user fee of US$27.50 at or before the time of the first arrival in a calendar year. This includes U.S. flagged vessels. User fee decals are available ahead of time online at dtops.cpb.dhs.gov.

Foreign-flagged boats must apply for a cruising license at a local CBP office, essentially a navigation fee of US$19.00 for vessels under 100 gross tons. This license is good for one year from date of issue or upon departure from the U.S., whichever is less.

The reporting requirements are detailed at the CBP website at cbp.gov. Click on the travel link in the green banner at the top of the page, then click pleasure boats on the next page. There are numbers listed for all the districts’ reporting offices. There are also a number of marinas where a boat can report its arrival.