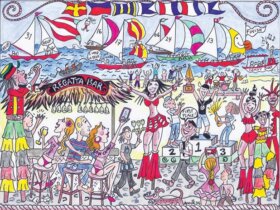 One of the major disadvantages to an outboard-driven boat is that without a separate rudder, at slow speeds the boats don’t exactly steer very well. In close-quarters – around docks and launching ramps, or maneuvering in a crowd – a skilled helmsman can turn that shortcoming into an advantage.

An outboard supplies both the propulsive force and the turning force. Unlike an inboard, shaft-driven boat – that has a separate rudder, usually aft of the propeller – an outboard driven boat relies on the motor itself to work as a rudder. And the shape of an outboard foot and fin, with attached prop, is not exactly rudder-like.

Therefore, the driver must rely on the aid of propulsion when turning. At speed, this comes automatically, as the prop is always spinning. But at idle, shifting into and out of gear at slow speeds, the prop is not always spinning. Turning the wheel in these instances usually produces little to no turning effect – the outboard is just dragged sideways through the water in whatever direction the boat is heading, particularly on larger, heavier boats.

Try using bursts of forward or reverse propulsion in tight spaces to get the boat to spin on a dime. In one common example, when coming alongside a pier or floating dock (on your port side), approach at a 45º angle, drifting forward at a slow speed with neutral throttle. As the bow approaches the dock, rather than turn the wheel hard right to kick the stern in closer to the dock – as you would instinctually on a boat with a rudder – instead, still in neutral, turn the wheel hard left and give a burst of reverse throttle. The prop, now facing the dock that you are approaching, will pull the stern in nice and close while simultaneously checking you forward momentum. The boat should stop inches from the dock, nice and parallel.