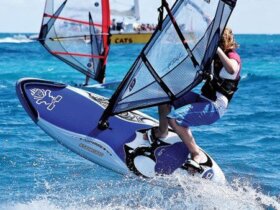 WRIGHTSVILLE BEACH, N.C. – After its inaugural launch in 2011, the Carolina Cup SUPquickly became one of the premiere stand up paddle board competitions in the world, drawing paddlers from as far away as California, Canada, Puerto Rico and Hawaii. Open to pros and amateurs, adults and children, the weekend-long event was to be held on Friday, April 27 through Sunday, April 29.

According to Co-Chair William Pope, registrations for 2012 far exceed 2011. At press time, athletes from three nations, 18 states and the Commonwealth of Puerto Rico have signed up to participate in the Carolina Cup Standup Paddleboard (‘SUP’) races.

The dynamic and strenuous paddling conditions of the Wrightsville Beach area will pose a significant challenge to competitors returning for another year as well as those testing the waters for the first time. The main attractions are the myriad conditions – from the flat waters of Banks and Motts channels to the wind-chopped surf of the Atlantic Ocean.

There will be three different long distance courses, along with the Turtle Kids Race and the Sunday Sprint short distance race. The long distance courses are the 3.5-mile Harbor Island fun race, the 6.5-mile Money Island race and the grueling 12.5-mile Graveyard trifecta traversing inlets, ocean and channels. Sunday’s Carolina Cup Sprint Races will be open to men and women, exhibiting power and skill on the short course with one buoy turn on the water.

Hosted by the Wrightsville Beach Paddle Club, the Carolina Cup SUP is a qualifier for the World SUP Championships.
Proceeds from this year’s Carolina Cup SUP will be donated to the Karen Beasley Sea Turtle Rescue and Rehabilitation Center on Topsail Island, Surfers Healing and Athletes for Cancer. seaturtlehospital.org, surfershealing.org,
athletes4cancer.org.