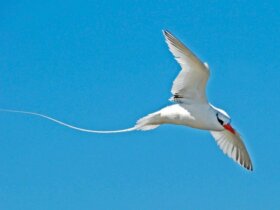 It’s not too often that a municipality in North Carolina opens its doors to transient boaters in the way that Carolina City just did. In fact, until now, it’s never happened.

The ten moorings recently installed along the ICW are an effort to bolster visitation among the transient boater population migrating up and down the ICW. The moorings – ten of them in total – are rated for yachts up to 55-feet, and were specifically designed to accommodate boats larger than 26-feet, which the local marina cannot cater to.

“The goal of the town is to increase access and safety for transient boaters, namely larger boats who cannot readily access docking facilities in our Town Marina or other local marinas and docking areas,” Parvin continued. “The moorings will bring a new demographic of transient boaters to Carolina Beach, and resolve the problem we have every year with folks breaking anchor in the middle of the night due to the silty nature of the sound’s bottom.”

Draft will not be an issue, Parvin noted, as is often the case along the ICW, with average water depths around 15-20 feet where the moorings are situated.

“The need for more transient infrastructure is continually expressed by local business owners, boaters, and residents,” Parvin explained. “Furthermore, transient boaters who do make it to town often express their wanting improved availability of access to the area,” which they apparently enjoy visiting.

And a unique area it is. “Carolina Beach is the only place on the ICW that you can actually bring your dinghy to a pier and walk onto the beach,” Parvin said. “That’ll be pretty cool.”

The mooring field was originally supported in the 2007 CAMA Land Use Plan and Harbor Management Plan. Carolina Beach seems fully committed to making it’s town a must-stop on the way north or south. Dinghy docks downtown, directly adjacent to the moorings and one block from the ocean are on the drawing board, as are bathroom and shower facilities, wireless Internet access, and boater information transmitted via radio.

“Right now the dinghy docks are all the way at the south end,” Parvin explained. “We’re eventually going to have an additional dinghy dock this summer,” he continued, “immediately opposite the mooring field and with all the facilities that a visiting boater might require.”

As for when they’ll be ready to use?

“Well,” Parvin said, “They are usable now. We haven’t finalized them and we haven’t adopted a management plan yet. We’re looking for a contractor to come out and collect fees, greet people when they come in, that type of thing,” he went on.

Part of the delay involves technicalities from the state permitting department, which says the moorings are currently sitting too low in the water – “Thanks to our overly heavy chains,” Parvin explained – but, he continued, “They are definitely usable.”

Which is a good thing for boaters in the neighborhood this summer. Until the plan is completed, the moorings will remain free of charge. Once it is fully enacted, a nominal fee of $20 is planned to be charged per night with a maximum stay of 10 nights. Fees that are collected will be used to pay contractors hired to collect the fee and registration, fund future improvements and facilities in the area, and help with annual maintenance.