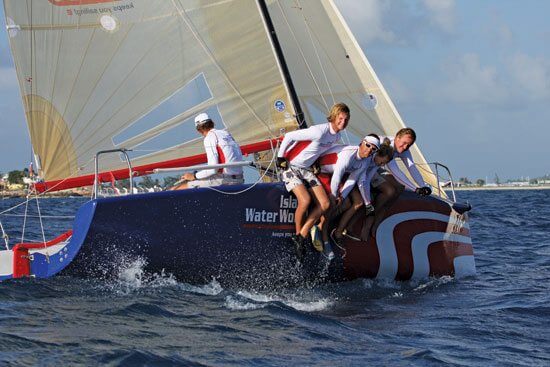 Popular Sint Maarten and Caribbean sailor Frits Bus will now campaign his Melges 24 under the colors of Island Water World. Bus struck a sponsorship deal with the Caribbean Marine Store in January. This is an important move for Bus who is an avid supporter of Melges racing and whose goal is to see the Melges fleet increase throughout the region.

Bus notes that having the support of a marine store is a boon. “The new sponsor is really working with us, so more team work to make the campaigns better and improve the boat and make it faster,” said Bus. “We now have the marine equipment available, great staff to help on the boat, and on water support.”

Island Water World managing director Sean Kennelly said he was delighted with the sponsorship. “Frits Bus is one of the preeminent sailors in the Caribbean. As Island Water World re-images and re-invents itself, we wish to be associated with a winning sporting personality and his team.”

Kennelly added, “It is an expensive endeavor moving boats from regatta to regatta: travel, entry fees, breakages etc., and sometimes without the help of sponsorships many local sailors would be limited in their ability to compete and hone their skills.

With the continued growth of the major international events taking place in the Caribbean, and no central authority helping to coordinate the events, the CSA has agreed to step in and establish policy to reduce crowding and conflicts on the race calendar.

According to the CSA, the goal of this new policy is for each major event to ‘own’ their place on the yearly calendar, thereby eliminating the need to coordinate on an annual basis. New events will be slotted in around the established regattas.

The new regatta sanctioning policy will take effect from 2014 onward, and each island, club, or organizer of a major international event in the Caribbean is asked to contact the CSA by June 1st each year to submit their proposed regatta schedule for the following year.

The annual HIHO-BVI Race (June 30th – July 7th) has added a kite division. Kiters will compete on several inter-island race legs and in a couple of course races during the six-days of competition. The highlight race will be the 12-mile Anegada race. Starting in Virgin Gorda and finishing on Pomato Point, Anegada, the race is a thigh-burning reach.

Kiters will carry safety radios and be shadowed by the event’s fleet of Moorings yachts. To compete, kite racers must use directional or course boards.