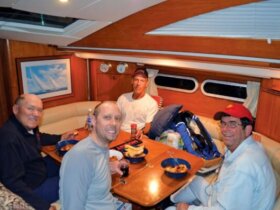 Jenny Gordon grew up with dogs in the UK, where her father reared and trained gun dogs, so she has always preferred retrievers. Arriving in Antigua in 1976, she missed her canine companions, and it was only when she moved to St. Thomas that she was able to acquire her own male golden retriever,  Buffer, who took up residence in her 33 ft. Morgan, Doghouse . Jenny eventually returned to Antigua in 1990 where she and Buffer took up permanent residence in English Harbour.

It was not long afterwards that another boat, with a female golden retriever on board, took up anchor nearby. Her owner asked Jenny if she wouldn’t mind looking after Lady whilst he went and attended to all sorts of important things—and he and his boat were never seen or heard of again. This left Lady on board Doghouse with the delighted Buffer. Jenny was a little less sanguine but succeeded in rearing all six resulting puppies in the cockpit, as well as finding suitable homes for them all in Antigua.

Buffer and Lady both lived to ripe old age and Jenny still has Zeke, one of their descendants. Zeke has become Champion Dog at the Annual Antigua Dog Show, carrying off Best in Show three years running now.

Golden retrievers may not seem the obvious choice for ships’ dogs, but Jenny swears by them. They are highly intelligent yet just go to sleep if nothing is happening. Obviously excellent swimmers, they can also clamber up the swim ladder on their own – and if anything falls overboard, then naturally the retriever is a natural at bringing it back. All Jenny’s retrievers have been excellent at fishing, sensing when a fish bit even before the reel would start to sing. One dog would go and sit in the dinghy and summon dolphins with a high-pitched whiney noise!

Their gentle natures make them ideal companions for children. Whilst Jenny was running Crabbes Marina in Antigua, her dogs used to teach children to swim! Another time, a baby learned to walk whilst clutching hold of a puppy. When it came for the baby’s boat to leave, the child was totally distraught, so much so that Jenny popped the puppy in her dinghy and rushed after the tearfully departing infant who was delighted to be re-united with her walking companion. Jenny is still in touch with the all the parties concerned.

Retrievers are very good guard dogs and Jenny has taught every one of hers only to bark when strictly necessary. One night, around 2 a.m., her dogs began barking for all they were worth. Jenny came up on deck but, unable see anything, went down below. The barking persisted. In the end, she noticed that a friend of hers, rather worse for wear after a night on the town, had fallen into the water and was unable to get back on board her boat.

Harry, a good friend of Jenny, took the dog out for a dingy ride whilst Jenny hosed down the decks. Upon their return, the dog jumped back happily on board—but then refused to allow Harry back on too!

Another of Jenny’s friends broke up with his girlfriend and begged a puppy to cuddle in his lonely catamaran anchored in Freeman’s Bay.  Jenny was then housesitting for Paul Deeth in English Harbour and at 5:30 a.m. the next day, a wet and tired puppy that obviously had little sympathy for his erstwhile broken-hearted companion climbed into  his preferred owner’s bed after a long swim in the dark.

Jenny continues to take great pleasure from her canine companions… they often outlast the human variety whose fidelity, good humor and intelligence can be far more questionable.

Biologist and former Eurocrat Gilly Gobinet took up permanent residence on Antigua in the Caribbean in 1984. She has been painting and writing—and sailing—ever since.  Her work can be seen at originalcaribbeanart.com