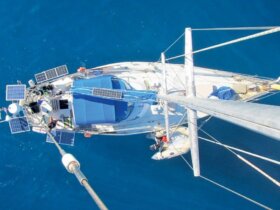 Charter Guest Questions.  You know what I’m talking about.  Some of my favorites have been:  “When that cloud moves, will the sun come out again?”  Or, when prepping for a dive, “Is this salt water?”  And one that I have heard too many times, “How many masts do you have?”

It is said that there is no such thing as a stupid question but I beg to differ.  It’s difficult to respond to these inquiries without making the guest feel dim-witted.  I have reached the point where I like to play along; after all, once the charter is over you never see the guests again so there is no harm done as far as I’m concerned.  Ironically, it was a charter guest who taught me to say things with conviction when I couldn’t answer all of their questions regarding the islands or dive sites or the like.

“Sandy, you could at least make something up and say it with conviction.  I’d never know the difference anyway.”  His advice has become my rule of thumb and it’s always entertaining for the crew when the week-long charter is monotonous and routine.  For example, a question mentioned above can be answered:  “No.  Clouds in the Caribbean remain stagnant and don’t dissipate.”

I have to admit that I have taken the game out of bounds.  I love to get a reaction out of my fellow crew to keep them amused during charter.  In fact, I’ve almost become a pathological liar, that is, when the truth doesn’t work best.  Below are two following examples of my psychosis.

Pathological Liar:  On a recent charter, the guests had taken a sincere interest in whether or not Chef Vanessa’s Chilean Sea Bass really hailed from Chile.  I didn’t think this was a C.G.Q. at all, but rather a well-educated inquiry, as the name stems from the fact that the Chileans were first to harvest it—but it’s not always caught in Chilean waters nor is it always bass.

Captain Juan proceeded to explain something to that effect, and then turned to me in hopes that I knew the exact whereabouts of the fish the guests were feasting on.  (I don’t help with provisioning; therefore, I don’t have an opportunity or time to read labels on the packages.  I don’t even know how to cook; in fact I can’t boil water.)  Juan said something about it originating from Thailand and looked to me for support.

“Singapore,” I blurted out.  I thought Singapore sounded more exotic than Thailand.  “It comes from Singapore.”  I had absolutely no idea but the fib just vomited out of me; and worst of all, I felt no remorse.

A couple of minutes passed and we grew bored.  We returned to the aft to smoke an absurd amount of cigarettes and Vanessa and I decided to take a quick skinny dip in the Caribbean to escape the heat while Juan fixed the air conditioner up forward.  When the guests returned, one of them asked what we did while they were off the boat.

After hearing so many of the same ridiculous questions it is no wonder that that I have become such a loon.  The next time you hear a C.G.Q., take it to a different level.  I can guarantee hours of entertainment that will break the cycle of tedious work.

Sandra Chance served as a stewardess this winter on a 73’ sailing catamaran for crewed charters of eight guests.  Last month she left to sail for pleasure and is headed for Panama.

Just in time for their tenth anniversary, the Salty Dawg Sailing Association (SDSA) has rolled out their new and updated website

The Ocean Cruising Club, the UK-headquartered ‘home port’ for global adventure sailing for nearly 70 years, gave as good as it got in 2020