Boaters growing up sailing in the United States who still spend their time solely in U.S. waters face two navigational quandaries. First, we are metrically challenged. As long as our charts display soundings in ‘feet’ and not ‘meters’, we are in our comfort zone. Also, if our aids to navigation are lateral and Red-Right-Returning, our anxiety levels are kept in check.

However, once we wander afar and sail the Caribbean or the Med, we become perplexed when we come upon a yellow and black buoy with two black conical topmarks. Quickly turning to our well-worn volume of Chapman’s Seamanship, we discover a confusing diagram with four yellow and black-banded buoys surrounding what is euphemistically called a ‘point of interest’.

The International Association of Marine Aids to Navigation and Lighthouse Authorities (IALA) prescribes cardinal marks as a method for maritime countries around the world to indicate the position of a hazard and the direction of safe water for vessels to avoid that danger. 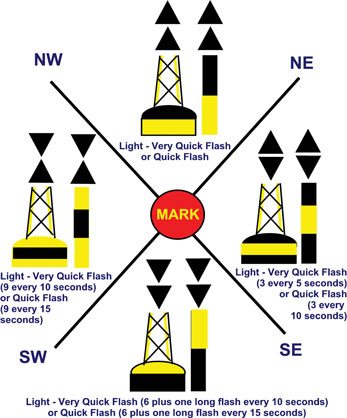 Cardinal has many definitions: a leading dignitary in the Roman Catholic Church, a red song bird and a player on a St. Louis baseball team. But a lesser-known definition is the four major directions of a compass: north, south, east, and west.

Substitute the word ‘danger’ for ‘point of interest’ in the diagram, and the use of cardinal marks becomes clearer. Always leave the cardinal mark between your boat and the danger, while passing that danger toward the direction indicated by buoy to find the best navigable water. According to The Mariner’s Handbook, published by the United Kingdom’s Hydrographic Office, Cardinal marks may by used to indicate that the deepest water in an area is on the named side of the mark; indicate the safe side on which to pass a danger; (or) draw attention to a feature in a channel such as a bend, junction, bifurcation, or end of a shoal.

If a cardinal marks is lit, the light is always white but the flashes can be quick or very quick. The pattern of flashes mimics that of an analog clock face. Imagine a compass rose as a clock. East would be three o’clock, south would be six o’clock, west would be nine o’clock and north would be twelve o’clock. An east mark flashes three white, a south mark flashes six white followed by one long flash, the west mark flashes nine white and the north mark flashes continuously.

It would be nice to have the United States adopt the usage of cardinal marks. But then again, my first grade teacher assured me by the time I was thirteen years of age our country would have ‘gone metric’. That was five decades ago, and I am still holding my breath.

Capt. Jeff Werner is a 23 year veteran of the yachting industry. In addition to working as a captain on private and charter yachts, both sail and power, he is a certified instructor for the RYA, MCA, USCG and US Sailing.