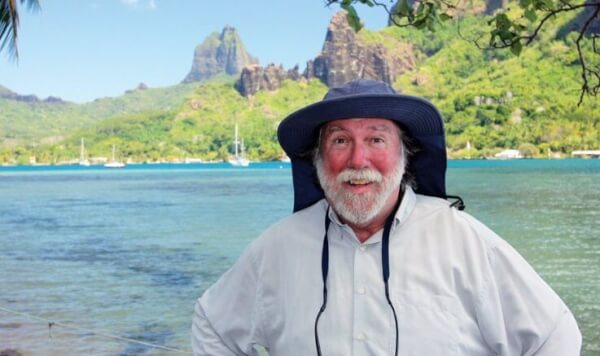 I’m having a rough time of it. I’m currently writing a book on heavy weather and, yeah, it’s heavy going. One problem is my target audience: people who have read (or had read to them) my previous books and who are, additionally, too dumb to avoid heavy weather.

And, frankly, I encourage them to experience the delights’ of heavy weather because it cuts down on manuscript criticism. (Fiddler’s Green has few mailboxes.)

How many Fat Heads (fans) will be fished out of the water clutching my latest book to their bosom? I have no idea. All I know is that if I send them off to sea with instructions to “embrace the storm” they are seldom seen or heard from again.

My wife Carolyn thinks that we lose about half our sailing audience every year because the true “dopes” in my hardcore fan base are actually attempting to apply my advice in water over their heads.

Actually, come to think of it, most stuff is over their heads.

But it’s true. Some sailors are so screwed up they think I can help them.

I know, I know that sounds utterly stupid if you’ve ever read one my marine how-to’s. (Yes, I think of my non-fiction instructional missives as how-to’s because I’m always thinking about how to screw my dumbest readers out of even more money.)

Actually, I get a lot of fan mail, mostly written in crayon. A few really devoted fans even enclose praise-worthy finger-paintings they’ve made. Many hot young trophy wives with wealthy elderly sailing husbands buy all my offshore books.

Of course, not all the letters I get are complimentary, which saves us money on TP.

I’m not kidding on the above. Wow, some folks have anger management issues!

Other readers are just delusional. They are constantly talking about slapping some sense into me. Not likely – the “sense” part, I mean.

Even stranger are my female readers who tell me I’m romantic. Huh? I mean, I lay around the boat all day watching my wife work. When I decide to scribble a few sentences, I shout at her loudly, “Work quieter, okay?”

The woman is totally nuts. Once she complained I was patronizing. I shot back, “Don’t worry your pretty little head about it!”

People want to know how I can be so prolific as a writer? There’s a trick, of course. I have a Writer’s Wheel I spin, which has two choices: sex joke and non-sex joke.

Just kidding! My latest book Lite Thinking on Heavy Weather, Fatty-Style! really goes into the nitty-gritty. It even caters to different sailor types with different mindsets. For instance, I suggest a Jordan Series Drogue for those macho sailors who prefer being dragged overboard aft, and a parachute-type sea anchor for those salty dogs who prefer to take their last bow over the bow!

It covers heave-to, heaving up, and power-puking as well.

And the book is full of compassion! For instance, if the puking-like-a-metronome sailor is tired of feeding the fishes from the loo’ward rail. I suggest they go below into the head and ‘call Ralph on the big white phone.’

Frankly, I don’t know how I’m able to be so nice to sailors on odiferous offshore barf-a-ramas.

Of course, we go into great detail on heaving-to while heaving-up. I’m serious! If you want to know which way the wind is blowing, just upchuck and observe the lighter chunks.

With heaving-to, the trick is to gradually reduce your vessel’s speed until it is dead in the waterâ€”which shouldn’t be hard for most cruising tubs.

Needless to say, I believe in humor. For instance, if you pull the cord to our life raft, an emaciated Jack-Tar-in-the-Box springs out, croaks â€œWater!â€ and then slowly deflates-
to-death.

I mean, what better way to get into the mood, right? 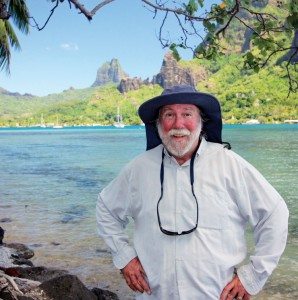 Of course, if you’re going to spend a lot of time in a life raft, it is important to medically explain to your fellow crewmember that exchanging bodily fluids isn’t a loss.

In my new missive (tentatively entitled) Whether or Not to Weather a Storm, Fatty-style! I go into scudding and lying ahull. Scudding is when you sail up to another boat with a particularly ugly crew and immediately jibe away. Lying ahull is what I do for a living. Although, in fairness, each of my marine columns has a true fact buried in it somewhere.

Obviously, in heavy weather you’ll need to know some knotsâ€”most of which are in Fifty Shades of Grey.

Actually, any time I meet a masochistic galâ€”I invite her offshore because I know she’ll enjoy all the various forms of suffering. Actually one newbie girl was surprised to see me wearing my safety harness outside the vessel.

Needless to say, we address the drogue issue, which some of the Fat Heads think is a code word for drugs. Not true! Andâ€”let’s clear this up as wellâ€”just because I talk about warps doesn’t mean I am warped, okay? And, yes, just because ropes have kinks, doesn’t mean I do.

Where do people get these weird ideas?

During the editing of (tentatively re-titled) Heavy Weather Suicide, Fatty-style! I had to convince my wife that “drag device” wasn’t RuPaul waterskiing astern.

Editor’s note: Cap’n Fatty and Carolyn are scribbling away about storms in windless Singapore.

Cap’n Fatty Goodlander and his wife Carolyn are currently on their third circumnavigation. Fatty is the author ofÂ Chasing the HorizonÂ and numerous other marine books. His latest, Creative Anchoring, is out now.Â Visit:Â fattygoodlander.com