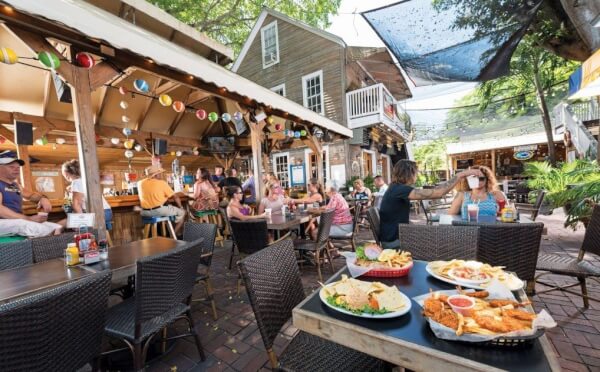 Well over 100 boats with crews, family and friends will descend on Key West, Florida, January 18 to 23, for Quantum Key West Race Week. It’s a fabulous week of racing by day and revelry at night. Thank goodness there is no fear of the town running dry. There’s everything here from iconic bars in historic settings to laid-back grub and grog shops and everything theme in between. Here’s a sampling of five of the best bars on the island.

Tuna – as a melt for lunch or blackened or jerked at dinner – is indeed on the menu at this favorite bar and eatery located two blocks to the northeast from Race Week Headquarters. Sit outside under a natural canopy of ficus and banyan trees, or inside where there’s cool AC. Signature drinks include the Top Shelf Tuna Rita or margarita and the Smokin’ Tuna Rum Punch. “It’s the locals, the tourists and Team Tuna, plus the fresh seafood, raw bar and live music that makes us special,” says general manager, Charlie Bauer. Come back in May when the Smokin’ Tuna serves as the home to the Key West Songwriters Festival, the largest event of its kind that features the writers behind those well-known songs.

Stretch your legs with a little over a half-mile walk from Duval Street to the historic seaport district at the Key West Bight. Schooner Wharf is home to the largest working fleet of Schooners on the east coast and the bar and restaurant here are the perfect places to relax with a Schooner Breeze (four flavors of rum mixed with tropical fruit juices), listen to live music and watch the in-house magician perform, or use the magic in your own mind to picture the tall ships and harbor walk as they were in days gone by. “During Race Week we will be featuring our Knot & Shot Contest,” says Paul Worthington, who owns the bar with wife, Evalena. “Contestants drink a chilled luge shot, tie a bowline and lasso a piling on wheels, pull the piling with a beer on it towards them, drink the beer and turn the cup upside down on their heads!  The contestant with the fastest time each night is declared the winner. The fastest time overall determines the year’s Champion!” 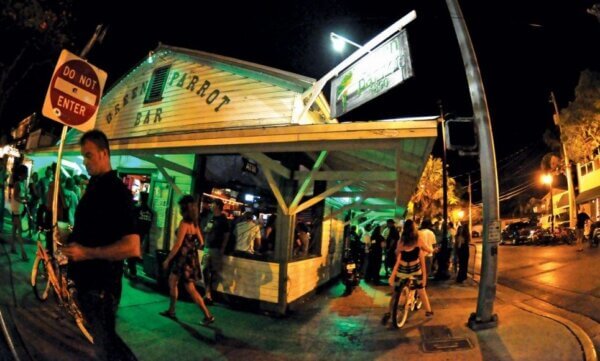 Three blocks south of Kelly’s, this corner saloon located in a 19th century frame building is known for its libations and its live music. The Root Beer Barrel – a shot glass filled with chilled Root Beer Schnapps set inside a rocks glass brimming with lager – is the signature drink. Weekend nights feature nationally-famous touring bands, while weeknights the party vibe thrives with a thumping jukebox. There are darts, pool and pinball for added entertainment. “What makes us special is the open-air atmosphere, ice-cold beer, spine-tingling cocktails and friendly, seasoned bartenders,” says general manager, John Vagnoni. 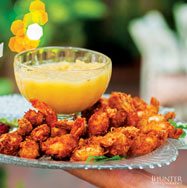 Start your own customized Key West bar crawl right here, steps away from Race Week headquarters. “Kelly’s is most famous for being the original home of Pan American Airways and owned by the actress Kelly McGillis of Top Gun fame,” says owner, Fred Tillman. “We have a microbrewery and feature Havana Red Ale, Key West Golden Ale and Southern Clipper, our wheat beer.” The dinner menu offers Islands-Meet-Mainland cuisine with entrees spanning from Coconut Shrimp to Beef Short Ribs served with Young’s Chocolate Stout gravy. Late partiers and early risers will both enjoy the Kegs N Eggs Breakfast where $3.50 will buy you eggs and bacon or a breakfast burrito, and craft beers sell at half price. 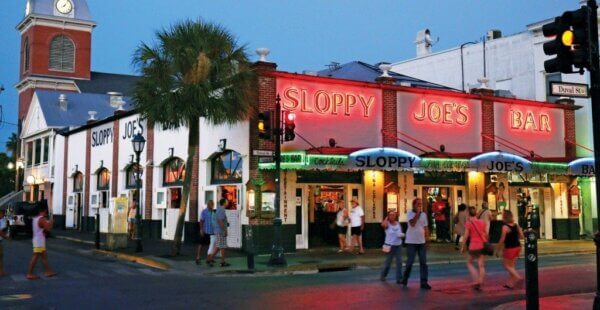 Half a block northeast of the Smokin’ Tuna is Duval Street, famous for its well preserved and charmingly restored Victorian mansions. It’s here, located on the corner of Duval and Greene Streets, that Sloppy Joe’s has been serving drinks since 1937. “Joe Russell the original owner of Sloppy Joe’s was good friends with Ernest Hemingway who was often a customer,” says Donna Edwards, manager of the Key West landmark that is listed on the National Register of Historic Places. Today, it’s signature drinks like the Papa Dobles (Papa Hemingway’s favorite), a mix of Bacardi rum, grapefruit juice, other flavorings and fresh lime, that keep patrons coming back.