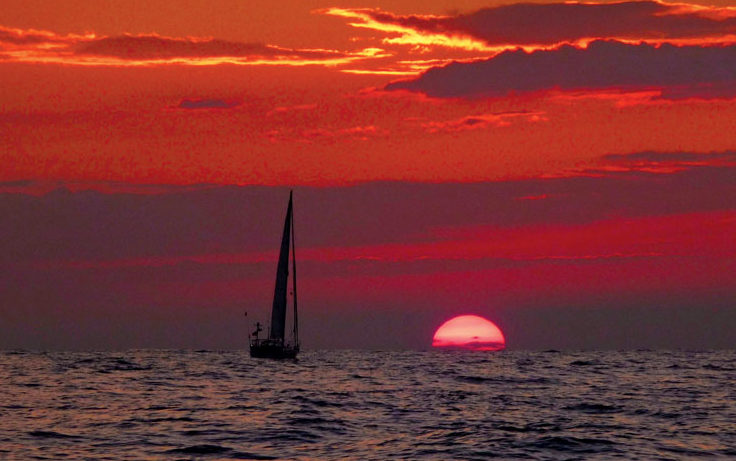 How to Sail Offshore – Wisdom from Experienced Sailors

With destination Curacao in sight at the far horizon, fate struck for the beautiful French 18 meter/60 ft yacht S/Y Krisnic in the early morning of November 28th when she ran aground at the north coast of Klein Curacao while on the way from the Venezuelan Islands Los Roques to Curacao.

Royal Netherlands Navy frigate HLMNS Van Amstel responded to the mayday calls of the seventy year old French skipper/owner Edmond Serillet who manned his boat on his own. The Rescue and Coordination Center (RCC) in Curacao immediately sent out the Coastguard helicopter, and Citizen Rescue Organization’s M/V Cornelius Zwaan arrived around noon, but all attempts to free the Krisnic, which tightly laid in the surf on her port side, failed. The yacht was so severely damaged that towing her away would hold the risk of breaking the hull, causing her sinking.

Six weeks after the unfortunate accident, the ketch rigged yacht was still prey to the waves and rugged rocks at the spot where she ran aground.  When All At Sea went to press, nothing more than the hull was left. The ship was completely stripped, partly by order of the owner during the first days after the stranding, but later by robbers who annexed the motor among other things without permission. The owner reported the missing parts to the island governor, who automatically is the finder of the wreck according to an old-fashioned law from 1935 concerning valuable stranded objects.

After things are settled the carcass most likely will be sunk as a diving object, considering the possibility to release it from the rocks in the whole and tug it to the south coast of the tiny island which is popular with divers and day trippers.  Klein Curacao (Dutch for small Curaçao) is only a flat and uninhabited island about 15 miles south-east of Curacao. Boaters regularly visit this small island during the day.

Krisnic is not the first boat that hit the ground at the rugged coast; the windward side is truly a graveyard for boats that didn’t stay out far enough or lost power. A small tanker, the Maria Bianca Guidesman is gradually being diminished to rust and dust by the constant pounding of the waves. The remains of another four or five boats are washed far onshore. This is also the side of the island that is a resting place for tons of driftwood, hundreds of flip-flops and thousands of plastic bottles. The other side is blessed with a long stretch of powder-fine, sandy beach which provides a tranquil day away from civilization. In the middle of the island, an old scenic lighthouse attracts attention, which by the way, was out of order for repair at the time the Krisnic ran aground. Fortunately the owner escaped unharmed. It could have been a great deal worse.