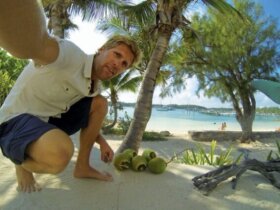 Just before dawn of our fifth day a helicopter clattered overhead. And shortly after, we noticed the light of a ship approaching rapidly, too sleek to be a merchantman, The radio came alive:  "This is American warship Clifton Sprague calling the vessel at 20 degrees 10 minutes North and 71 degrees 35 minutes West steering a course of 280 degrees."  That was us.

As the light grew we made out a knife-like bow, a low stern, and an array of guns, missiles and electronic dishes. After taking our name and particulars there was a long pause, then "Prepare to be boarded."  The boarding party was young and inexperienced.  They didn’t leap aboard smartly—the skiff kept bouncing away from our topsides just as the guys were ready to jump, then closing with a jolt that knocked them to their knees, cumbersomely attired as they were with life vests, heavy combat boots, clips of ammo, rifles strapped to their backs (with plastic bags rubber banded over the muzzles.)  Two riflemen took up station on the foredeck, guns at the ready.

A "specialist", clearly unused to small boats in a seaway, asked plaintively, "Who’s the skipper here? Can’t you stop this rolling?"  His job was to measure our fuel to prevent us from selling it.  He followed me down below where it was close and warm.  I opened the top to the tank and he bent down to drop in his plumb bob on a wire, getting his face right into diesel fumes.  Halfway through his job, he broke out into a cold sweat and his face had an uneasy pallor.  He bolted up on deck and shouted to the inflatable "Get me the hell outaa here!"

Soon the ship radioed back that we would have to return to the Dominican Republic or go 12 miles offshore and heave to indefinitely to await their convenience.  That prospect outraged us.  I informed the lieutenant that we intended to continue in to Cap Haitien and that they would be hard put to stop us.  What were they going to do—sink a small U.S. yacht carrying medical supplies?  That would look great in the papers.  Then Larry started pulling out sheaves of paperwork from the State Department, producing exhaustive cargo manifests and brandishing notarized correspondence with the Miami Coast Guard.  The young lieutenant, obviously uncomfortable with his orders, took our case back to the captain via VHF and came back smiling.  "We’ll inspect you here and now."

By the time we finished we had become friendly with the lieutenant and he agreed to keep an eye out for us; with that assurance we bid the boarding party farewell and sailed into the famous old harbor of Cap Haitien. The small dock meant for yachts almost buckled under the weight of vendors, stevedores, Haitian Rotarians, and the merely curious. Not trusting Customs, with their shady reputation for outright stealing, Dorothy gave the refrigerated bag of antibiotics to the Rotarian who was a doctor.  He deftly put it in his coat and turned to his car.

The Customs officials weren’t exactly spit and polish—the year 1994 was a low point for Haiti.  Only two of them had any semblance of uniform.  The other three men relied on their prominent badge of office—a gun casually stuck into the waist band, trademark sign of the dreaded "ton ton macoute"—hit men for the regime.

It gratified us not a little when, just as the officials sat down in the cockpit, our VHF burst out, "Sailing vessel Breath, this is the United States warship Clifton Sprague.  Are you arrived at a dock yet?"

I tried to astrally-project the image of a helicopter gunship warming up, crammed with SEALs, just waiting for an excuse to storm in and kick some ass. The customs official casually cleared us in, asked for our passports and adroitly swept them into a briefcase.  "We keep until you leave," he said cheerfully.  I hated to see them go.

Cap Haitien looked like a war town—blacked out at night because of the shortage of fuel.  The broad streets laid out by the French were unnaturally empty.   Gone were the colorful tap-taps that used to ply the countryside crowded with people, sacks of produce, and chickens tethered by the feet.  Cheap and overcrowded, the tap-taps provided constant commerce and transport throughout the country and were a symbol of its vitality, its creativity.  Now the thoroughfares were silent, no dust, no color, no noise, no movement save for quiet streams of people on foot who seemed subdued, resigned and waiting. The internal trade had come to a standstill and foodstuffs rotted in the countryside while people starved in the cities.

The Rotarians warned us not to stay because the situation was so volatile. The next morning, I went with our translators to get our passports and clear out of the country. The Customs officer was sleeping.  Eventually someone prodded the sleeper and she looked up with her bloated face and reddened eyes, not in a receptive frame of mind.  The first requirement she gave was a crew list in six copies. Six, she emphasized and then asked, with the first glimmer of civility, whether we would care to use the copier.  We knew this scam from the day before— copies cost a dollar apiece and were a favorite moneymaker.  When we refused and started making them ourselves her face fell and with it the mood in the room.  Cheap bastards—you could feel the vibes.  Meanwhile we wondered what the hell they need six copies for and where they would keep all the paperwork.

Here we were the first yacht that had come by in a year, bringing a cargo of donated medicine—you’d think they’d be grateful, perhaps helpful, or at least polite.  But no, they went out of their way to avoid us.  We had to track down and identify each responsible party and corner them all with the relevant papers.

Finally we had worked our way through the Customs, the Immigration, the Harbormaster and the Port Authority, and had been relieved of $30 en route.  We thought we were clear but were informed that the police had to inspect the boat before we could leave.  So we went to the police post, a tiny cubicle in a raw concrete wall that just contained a rumpled bed on which sat a frowning, coarse-featured woman in a skintight miniskirt.   Her unbuttoned blouse showed big tits stuffed into a cheap black bra.

The policeman was lounging around outside checking on the progress of a joyful domino game which engaged two of his command and two plainclothes types with pistols stuck in their belts and faces to match.  The chief listened to our request that he come to search the boat, and shook his head, yawning.  "Not now…I can’t leave the office," he said, indicating with a wave of his hand the cubicle with the bimbo.

It was eventually established that the two junior ranking officers would perform the job.  To speed things up and ensure that the men didn’t get lost en route to the boat, our Rotarian doctor who was taking us around in his vehicle offered to give them a ride over to the marina.  They piled right in but immediately insisted that they had to be given a ride back too.  The doctor, a distinguished-looking guy with a cheerful combative manner, refused.  The chief came up and ordered the doctor like he was a servant, "Driver!  Driver!"  He knew that much English.  The doctor became adamant.  We offered to pay their cab back just to speed up the interminable hassle, but the doctor turned to us with a smile and said in his excellent English, "Please…these are my people.  Let me deal with them."

He got out of the car and went to confer.  There was a good deal of argument, then some laughter and finally the men got on their bicycles and got there before we did.  The doctor told us that he recognized one of the men as one he had treated for an illness some time ago, and threatened to give him the wrong injection next time.  This had brought the laughter and the resolution.

But not quite yet.  The cops made everybody stand on the hot dock while they took a perfunctory look around the boat and then sat down in the shaded cockpit talking while we waited in the blazing sun for their verdict.  I watched the harbor fascinated by the skill of the Haitian boatmen who were doing every thing under sail.  Cargo lighters sailed into the harbor under perfectly-cut, hand-sewn sails bellying without a crease, stitched together from old Robin Hood flour sacks, worn-out jeans, bits of canvas, and drapes.  Gifted sail makers—especially since they fit the curves of their wonderfully crooked spars.  I watched one beamy forty ft sloop, heavily laden with sacks of charcoal, approach the crowded wharf and drop its distinctive sliding gunter main to glide in under a jib.  At a signal the anchor went over, the jib was dropped and she rounded up smartly, her stern to the flotilla of other boats whose crews pulled and manhandled the boat to rest—a beautifully-choreographed performance.

Eventually, after sweltering in the Noon day heat we inquired if we could go now and they shook their heads.  Why not?  Because the chief had to come.  We drove back to the office but the chief and the woman had disappeared to nobody-knew-where, except that they definitely weren’t headed for the boat.

At long last, they tired of their game, permission was granted, and our passports returned—but there was a last hurdle to jump: the vendors.  They had crowded the dock all the previous afternoon imploring us just to look.  But once you established eye contact you couldn’t leave without a heartbreaking scene.  The guys were desperate—they told you their children were waiting to eat, the baby needed medicine—and it was probably true.  We were their only chance for this day, maybe this week.  We had money in our pockets, we were tourists, we owed it to them.  I ended up with some carved junk I didn’t really want.

Last was leave-taking from the guards, Tony and Simon, who were to be paid by the local Rotary but had set their hearts on the munificent bonus sure to come from the Americans.  They scowled at the thought of the niggardly wages that the local Rotary would pay them…oh, that!  Haitian people too cheap, but you, Skip, we know you’ll take care of us.   I would have negotiated a price in advance, but feared they might help themselves to some of the boat’s stuff if they didn’t have the incentive of a windfall. So, they would be paid locally; they managed to cadge a case of condensed milk  ("for my babies, sir.”  It could well have been true but my guess is it was to be sold), and Larry gave them $10—about a week’s wages—and when I gave them another $10 their faces fell.  They couldn’t believe it—there would have been a teary, importunate, and eventually nasty scene if we weren’t shoving off, retrieving lines, shouting farewell to the Rotarians, and quite obviously unable to listen.

We backed out of there forthwith, set sail, contacted the Navy, and got boarded again by the same lieutenant who wished us well, ignored the paintings and carvings and Brabancourt rum we’d purchased, and palmed me his address as he shook hands goodbye.