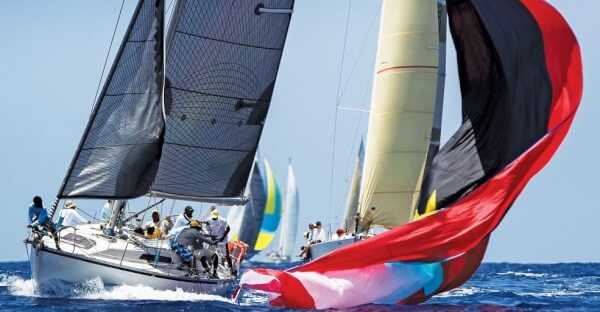 The 49th edition of Antigua Sailing Week was memorable, with superb conditions and a fairy tale ending that showcased the secret to the success of this celebrated regatta. Over one thousand sailors from more than 20 countries took part, all hell-bent on world class racing and spectacular partying afterwards.

Sir Hugh Bailey and his CS40, Gypsy-UGo scored straight bullets until the final race to win CSA 7, but a 2nd in the last race nearly dashed his hopes of lifting the coveted Lord Nelson Trophy, awarded for best performance at Antigua Sailing Week. However victory was confirmed at the final awards ceremony and marked a very popular win for Sir Hugh and crew.

“I made the mistake that cost us the last race as I went around a mark the wrong way and we had to turn back. So I am relieved that it didn’t cost us in the end,” Sir Huge explained “I am the only skipper left that took part in the first Antigua Sailing Week and I have to say that today is a very good day for Antigua. I have never won the Lord Nelson Trophy before but this win is all about Antiguan youth.

There are many young Antiguans taking part these days, like Shannoy Malone, who has sailed with us this week. He is only eight and this is his second Antigua Sailing Week. Youth is our future; they will keep the fires burning.”

CSA 1 Racing Ocean Class
Linas Ivanauskas’ Volvo 60, Ambersail was the winner of the new CSA 1 Ocean Class, which was created to place older generation round the world racing boats in their own class. Ambersail’s regatta started with a disqualification for not sailing the correct course, but the team from Lithuania put together a string of six wins to take the class title.

“After the first race we didn’t think we would win, we had to work very hard. We will tell everyone in Lithuania about this fantastic regatta and we know how to celebrate, so we will be back next year for the golden regatta!” Ivanauskas said.

CSA 2
Renato Faria’s Brazilian Dufour 500, Ventaneiro 3 was the winner after a pulsating battle with Kialoa III and Swan 46, Milanto. The camaraderie in the class was evident at the prize giving where all three teams got together for a group photograph – Brazilians, Dutch, Spanish and British sailors, all sharing a memorable occasion.

“It’s been fantastic. Antigua is the first place that I ever sailed competitively, the place I got engaged and the place I was married. This is where it all started for me and today it is just the beating heart of Caribbean sailing,” Langley said.

“We have had a marvelous time and not just from the racing. The whole atmosphere of Antigua has been a delight,” Hightower enthused.

CSA 5
The highly successful J/122 El Ocaso, a former Lord Nelson Trophy winner, was chartered to Chris Body who raced with his wife Caroline and their two daughters, plus friends from the UK.

“It has been fantastic,” said Body. “Caroline and I came to Antigua 25 years ago and we decided it was time to come back with our daughters and experience Antigua Sailing Week for the first time, and it has been absolutely marvelous.”

“This doesn’t get any easier,” noted Applebey. We’ve had very competitive but also very honest racing all-round. The team we have on board is not the youngest team but they have worked really hard. I have sailed with a team half their age but their input and strength have been totally admirable.”

Bareboat Overall
Hatse Flatse, skippered by Mario Bakker, was the winner of the Bareboat classes overall. The team, all from Almere in Holland, won seven out of nine races, making the podium for every race.

With the final awards presentation over, the festival atmosphere continued as crews danced to Asher Otto and Itchy Feet.

The 50th Antigua Sailing Week takes place April 29th to May 5th 2017. Online entries are already open with the Australian yacht Let’s Go being the first entry. Enter at: www.yachtscoring.com

Gary Brownhttp://garyebrown.net
Gary E. Brown is the Editorial Director of All At Sea Caribbean. He is a presenter on Island 92, 91.9 FM, St. Maarten, and the author of the thriller/sailing adventure Caribbean High. For more information, visit: garyebrown.net
RELATED ARTICLES
Antigua