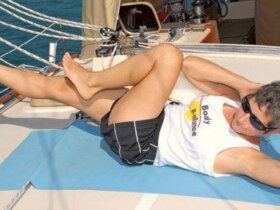 Stay in Shape – How To Exercise on a Boat

Believe it or not, setting your hook will be the easiest part of this entire anchoring experience. However, you can’t just roar into an anchorage and throw your hook over the side as soon as you are close to the bar. Here are some Do’s and Don’ts to help you get your anchor set correctly … and look good while doing so.

DO consult anchoring experts. Review Chapman Piloting, Seamanship & Small Boat Handling to learn the basics of anchoring. The book even has pictures and how-to drawings. At a cost of around $50.00, Chapman’s – the boater’s “bible” – is the best all-around reference book you can own. Additionally, anchor manufacturer’s show how-to tips on their websites.

DON’T assume your crew will be able to read your mind. Talk about everything before you head out. Who will drive the boat in the anchorage? Who will set the hook? Discuss hand signals. When the person on the bow points to starboard does that mean she sees an obstruction to steer away from, or does she want the helmsman to turn right? Review the photos accompanying this article; they demonstrate some commonly used hand signals.

DO practice anchoring before sailing to a popular beach bar. Round up some boaters, promise them beer later, and go to an un-crowded area. Practice every aspect of anchoring: drive the boat, use hand signals and set the anchor. Then haul up the anchor and do it over – again and again – until your crew starts whining. Better to learn in an open area with experienced boaters to teach you, than to make mistakes in a crowded anchorage in front of strangers who will laugh at you.

DON’T blast into the anchorage. Approach slowly and watch for channel markers, small sailboats, kayakers, windsurfers, snorkelers, and underwater obstructions. If you are unfamiliar with the area, carefully drive through the anchorage once or twice and assess everything –prevailing wind, how other boats are hanging, how much they are swinging and which way the current is running.

DO be safety conscious and pick a spot that is not too close to another boat, which can be difficult in a popular area. The general rule is that there should be enough room between anchored boats to allow them to swing 360 degrees without hitting each other. The boater who is already anchored has the right to ask you to move if she thinks you are too close – don’t argue, just move. If you stay, you be will be liable for any damage if your boats hit.

DON’T anchor on top of another boat when you are in a secluded place, either. A lot of us are looking privacy, which is not easy to find. If you discover a boat in “your” hideaway, be considerate … anchor as far away from it as you can. If the other boat’s stereo volume increases to an ear-splitting level as you approach, or if a naked guy stands up and stares at you, consider yourself warned to back off. (Caution: the sight of a naked woman does not seem to scare people away – quite the opposite, in fact.)

DON’T throw the anchor – unless you want to look like a tourist. Look down, through the crystal Caribbean water, choose a sandy spot, and carefully lower your hook. Check the water depth, calculate how much rode you need (see Scope Calculation Example), pay out the rode and snub it off. The person setting the anchor should always communicate with the helmsman, with either hand-signals or voice, so he will know exactly what is happening on the foredeck.

DO back down – go easy, at first – once the anchor rode is cleated off. Backing down will either power set your anchor or let you know you need to try again. Don’t panic if the anchor is not set. Pay out a little more rode – failure to put out enough rode is a common mistake (see Scope Holding Power chart) – and back down again. If that doesn’t work, pick up your gear, evaluate the situation, go around and try again.

DON’T scream at your crew. They are most likely your family and friends, and you probably would like to keep them as such. While screaming and foul language may amuse nearby boaters, neither will endear you to your crew … and if you act like an asshole too often, eventually no one will go out and play with you.

DO take a sight bearing and visually check the anchor once it is set. Before you leave the boat, look around and see where you are relative to a fixed object, and then look at that object now and again to make certain the boat hasn’t moved. As an added precaution, we always snorkel our anchor, just to make certain it is dug in and that our rode isn’t chafing against coral.

DON’T be embarrassed to ask for help. Can’t get a good set? Get some help from the people on the next boat over – the ones who have been alternately entertained and horrified while watching you screw up for the past 30 minutes. They are probably desperate to offer you their assistance so they can relax and quit worrying about your boat hitting theirs.

A True Story – How to Set the Anchor:

We were enjoying a quiet afternoon at anchor in Savannah Bay, Virgin Gorda, when a bare-boater approached intending to anchor off our port side. Having visited Savannah Bay several times, we knew how difficult it was to set an anchor in that spot. The couple made repeated attempts, raising their voices as frustration set in. They circled around several times, always returning to the exact same place. When she went into the water and tried to direct him from there (yes, he had the boat in gear), we couldn’t stand it anymore.

My husband, who can yell louder than I can, waved to get the driver’s attention, and then called out concise instructions. “Get her back on the boat. Pick up the anchor. Come around and go over there. Move forward. Drop the hook – right there! Back up – slowly. Put out more rode. Go to neutral. More rode. Yes, more than that! Now cleat the line. Back down!” Safely anchored, they went ashore. We breathed a sigh of relief and resumed limin’.