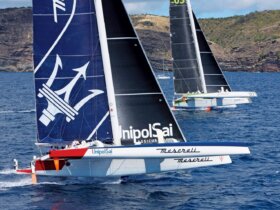 Having grown up aboard an old wooden schooner, the sight of a crowd unexpectedly gathered around my boat as I return to a marina always gives me a jolt. Is my vessel sinking? Is my tired-looking spouse throwing my Viagra into the water? Are the literary police there to arrest me for using my poetic license too much?

A number of times as a child I returned to our family boat Elizabeth to find my mother frantically manning the giant deck-mounted pitcher manual bilge pump (with its six-foot handle) to keep our floating home floating – much to the delight of the local dock-gawkers.

So, understandably, I usually associate dock crowds with disaster.

Luckily, this time I was wrong. It was just my wife Carolyn playing with her adapters. German/American Horst Wolff of the Island Packet Pacific Star was there. He’d lent us a long extension cord to enable her to run her Rockwell jitterbug sander. Alas, the cord wouldn’t plug into the dock socket – until Californian Greg Claesson of the Hunter 46 Sonrisa offered up the appropriate flat-stud-to-round-stud pigtail. Unfortunately, Horst’s cord had a New Zealand female end.

Kiwi Brice aboard the custom steel sloop Silver Fern ran back to his boat and grabbed a New Zealand male plug – but it converted to a Euro-Turk female receptacle.

“I’ve got one of those,” said Tom Sampson, a Brit from Katanne, “It will only take me a moment to dig it out of the bilge.”

By this point, the adapters were plugged into other adapters which were adapting the adapters – and the pile was damn-near as long as the extension-cord itself. Rube Goldberg would have been proud. The crowded hushed. Carolyn plugged in her boom box, and Leonard Cohen started bleeding mournfully out the speakers. Success!

But before a cheer could go up, I rained on her parade. “Sorry, dear,” I said, “but this isn’t going to work – not for the sander. Your boom box is electronic, and, thus, is easy to make multi-voltage – but the sander has a 110 volt motor. You know that. You can’t plug it into 220 volt – or, at least, not for long.”

“Zees es true,” said Michelle, the Frenchman aboard the catamaran Escargot of Brittany. “All zee electronics are manufactured with the smoke on zee inside, no? If vous plug zee machine into the wrong voltage, zee smoke escapes. And it is very expensive to get that smoke back inside, oui?”

“Ã¢â‚¬Â¦ tres cher!” agreed one of the Aussies off Acadian Quest.

“Ã¢â‚¬Â¦ for that, you need a converter, not just some adapters,” chipped in a Belgium sailor with a scraggy goatee and too much hair tonic.

“Ã¢â‚¬Â¦ what’s this about converting,” asked California Greg. “I’d happily convert from Catholicism to Buddhism – if that dude would just get serious and lose a little weight!”

“Don’t forget about the cycles,” tossed out a passing Dutchman. “It’s sixty cycles in the US, and fifty cycles here.”

“Ã¢â‚¬Â¦ ah, the Tour de France of the electrons, eh?” smiled Michelle. “Zees is like the white and red wine, eh?
No mix!”

At this point, a frustrated Carolyn gave up. She had never been too enamored of the idea of sanding the varnish anyway.

“Ã¢â‚¬Â¦ vin rouge?” she said, pandering to the crowd. “now there’s an idea! Ah, a chilled flute of Veuve Clicquot champagne would taste good right now – with a side order of foie gras!”

“Ã¢â‚¬Â¦ it’s a party!” laughed Hippy Harry. “Anybody
got matches?

It’s true that, as you circumnavigate, you almost need a United Nations of Help to accomplish the simplest of things. There’s always a ‘slight problem’ with global compatibility. If the appliance you have happens to be the right voltage, then it’s the wrong amperage or cycles or something.

Take the propane problem, for example. Nearly every country in the world has its own unique propane valve – whose sole criteria is that it is not compatible with any other mechanical fitting in this universe. So we’re often forced into refilling our propane bottles ourselves – via rented bottles and a plethora of various sized plastic hoses.

While doing this I always wear the T-shirt I purchased off the back of a bomb demolition expert in Israel. It reads: If you see me running, follow quickly!

To decant propane from one tank to the other requires – besides a death wish and a miserly bent – to hoist a full propane tank upside down in the air above the empty one.

The first time I attempted this, I hoisted the tank into the rig of Wild Card in one of the calmest anchorage in the world – well, the calmest in Southeast Asia, anyhow. Alas, within minutes a gaggle of ski boats entered the anchorage and started doing donuts around our Hughes 38.

I gestured wildly as the marauding Asians to slow down and leave no wake – by pointing up into the rig, making obscene pumping motions with my fist, and even signaling with my most prominent finger in frantic effort at universal communication.

Encouraged and pleased by my excited attention, the water skiers then switched to doing figure-eights around Wild Card.

“Ã¢â‚¬Â¦ You don’t think there’s any possibility that the metal tank hitting all that metal in the rig could create a spark, do you?” said an amused Carolyn as the swaying tank rang the mast like a bell.

“Ã¢â‚¬Â¦ This isn’t exactly how I hoped to study ‘big bang’ theory,” I confessed.

That was the last time I hoisted any bomb-like device into my rig.

The next time my propane tank needed filling, I transferred its contents ashore. Alas, the spectacle of a berserk sunburned foreigner lynching a propane bottle from a lofty tree attracts the attention of even the most laidback of Malays. Soon every pipe smoking, cigar chomping, cigarette puffing, and/or marijuana inhaling individual with a Bic lighter was standing next to me, asking with a devilish grin, “Can I help?”

Of course, none of the Euro-units of measurement are familiar to a Midwesterner such as myself either.

If a Euro-yachtsmen tells me, “I built my 14 meter boat that weighs ten metric tons fourteen klicks out of town – on my half-hectare farm. I constructed it out of 10 millimeter steel plate, and painted it with 10 liters of coal tar epoxy Ã¢â‚¬Â¦”

Ã¢â‚¬Â¦ well, I haven’t the foggiest.

Hey, I’m from the slums of Chicago – so it took me awhile to realize that not everyone selling by grams and kilos were drug dealers.

Ditto beer. I heard a Brit ask a German if he could buy him a pint – and the Germany said, “Actually, I’d prefer 500 milliliters.”

My American torque wrench is useless too – who knows how foot-pounds compare to meter-kilos? Or kilometer-tons. Or whatever. Not I!

Even asking a fellow boater how much anchor rode he has out turned into a feet/fathom/meter quandary – unless a traditionalist from England replies in cable lengths.

Oh, and they don’t sell diesel by the gallon in the Mediterranean. They use liters instead. And charge you the same amount.

Nor is the money the same. A favorite trick in Turkey is to quote in lira and charge in euros – effectively doubling your money and blaming it entirely on a ‘language problem’ rather than pure greed.

Do you know why they call them SIM cards in mobile phones? Because no matter how much you pay, it SIMply won’t work in the next harbor or anchorage.

And, despite the fact that I haven’t lived in the US in over 30 years, my credit card company keeps calling me with the distressing news that someone is using my card overseas.

“I’m not just overseas,” I tell them. “I’m on the seas! The high seas! Hell, while going to windward in heavy air, I’m often under the high seas!”

Of course, I do visit the States occasionally. I’m always stopped by Customs & Immigration when I do – and asked why my bulging passport has more stamps than Hilary Clinton. The first thing they routinely ask me is where I live, and then they order me to recite all the countries I visited since I left America.

If it is the beginning of the Immigration officer’s shift, I can usually accomplish this before he has to go home.

Ã¢â‚¬Â¦ Both coming and going, they sweat me – but only in Fahrenheit in America and Centigrade elsewhere.

And there’s that pesky 24 hour military time they use here in Turkey – which translates to me showing up for dinner two hours after everyone else has eaten.

Ah, yes, the world is truly a diverse place. Have you ever noticed that each country has a different passport stamp which is completely illegible in a unique way? Clever, eh? And the smaller the country, the larger the clearance stamp. Hell, tiny Funafuti, Tuvalu – an island that it is about ten feet wider and longer than its runway – has a stamp which spans the whole passport page!

Of course, during our previous transits of the Galapagos we’ve learned a lot about that butterfly-chasing-sailor named Charles Darwin. My favorite Darwin quote is: “Adaptability is more important than intelligence.”

This is cold comfort to fellows such as myself – who are a few sheaves short of a full masthead. But, in a way, it’s liberating, too. Now when I run aground I just say with a Euro-shrug, “Well, I guess there was a kilo or two less water than I thought!”

Cap’n Fatty Goodlander lives aboard Wild Card with his wife Carolyn and cruises throughout the world. He is the author of Chasing the Horizon by American Paradise Publishing, Seadogs, Clowns and Gypsies, The Collected Fat, All At Sea Yarns and Red Sea Run. For details of Fatty’s books and more, visit fattygoodlander.com

Poets often write about the joys of falling in love—they seldom mention the painful break-ups that invariably follow.