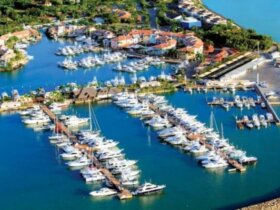 Ten boats eventually took part in the competition, with Nicky Johnson
from Saba – last year’s champion – winning the prize for having travelled the
furthest.

Since the object of the tournament is to raise money for the Special
Education School – Scotiabank pledged to match all money raised – the mood was
light-hearted and egos left at the dock. All the better, with one boat radioing
in a 60lb catch that turned out to be 27lbs at weigh in, and another submitting
a film of its releases which revealed, once developed, nothing more than a
Boobie Bird!

Third prize went to the tournament’s first ever winner, Lee Halley, who
caught the second heaviest fish, a 40lb Yellow Fin Tuna. Second prize, for most
combined weight, went to Striker,
captained by Gerrit Matser, for a 99.2lbs total catch.

Philipsburg-based Striker also
walked off with the First Prize for the 42.6lbs Yellow Fin Tuna landed by
youngster Mario-Pierre Jonhan (pictured with trophy).

According to Captain Matser, the strategy of fishing off Marlin
Boulevard near Anguilla paid off. The boat came across what it thought was a
net in the water, and realised it was a ‘bait ball’ – schools of ‘Hedgehog
fish’ marshalled into a funnel by Yellow Fin tuna. “We stayed there all day,”
said Matser. “Tuna are not an easy fish to hook –they don’t strike often, but
when we got them in the boat, their stomachs were full of bait fish.”

A
BBQ, raffle and kayak relay race by the Friendly Island Aquatic Club also
helped raise funds, with “nearly all marine businesses within a 20-mile radius
giving a donation”, according to event co-organiser Laurie De Robles.

More information about the St Maarten Big Game Fishing Foundation can be
obtained from Robbie Cijntje on (599) 557 0106.