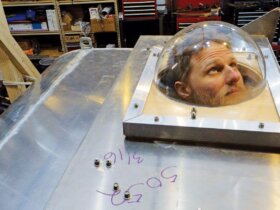 Anguilla welcomed RFA (Royal Fleet Auxiliary) Wave Ruler, the British Ministry of Defence’s fast fleet tanker, when she anchored off Road Bay on 15 June for a three day visit.  This gentle giant has some impressive statistics: 196.5 metres long, 30.4 metres wide, when full she displaces 31,500 tonnes and has a draught of 13 metres.  She has a top speed of 18 knots and carries 2 30mm AA cannons.

With a complement of 80 civilian personnel she is in the Caribbean as part of the UK’s obligation to its overseas territories to be on hand in case of trouble.  She will support her Royal Naval counterpart, the frigate HMS Iron Duke, in disaster relief efforts, as she did last year following Hurricane Felix, and will take part in counter narcotics patrols, supporting not just the British but the American, Dutch and French authorities.

Hardly had the anchor rested in the sand than the volunteer cricket team was leaving to play an Anguillian team in a friendly match which saw the sailors soundly beaten by the gleeful locals.  The score, 93 runs from 20 overs by the sailors, 93 runs from eight overs by the Anguillians, led to the local team continuing and achieving 240 runs in their 20 overs in the process.

As Captain Duncan Lamb commented when he heard the score, “as islands get smaller [that the ship visits], defeat is the order of the day and the embarrassment gets bigger!”

Captain Lamb and his officers attended the Queen’s Birthday Party at Government House and the Captain made courtesy calls on the Governor, Chief Minister and Commissioner of Police, and held a Press Conference at the police station.

Meanwhile, members of the Anguilla Fire Service were being put through their paces by PO(SE) Terry Hunt and Quartermaster, PO(E) John Doherty.  Visits of this nature are a good source of extra training for the local brigade and, as Sub-Officer Sheldon Browne noted, “It was exhilarating!  We now have a better understanding of how to combat fire on a vessel.”  Small groups of fire fighters each had a turn at putting out fire behind closed compartment doors, using high pressure hoses.   This was a serious business as one wrong move would have resulted in the fire penetrating the next compartment and spreading further on the ship.  Fires on vessels present unique challenges which are unlike those on land and thus require different methods of putting them out.

The ship hosted a group from the Disaster Management Committee.  Committee member, Calvin Bartlett said, “It was a learning experience and we were able to see what type of emergency and other technical support equipment is stored on board this vessel.”

Members of Immigration, Customs and the Police Marine Unit plotted courses and used charts with Deck Cadet Officer James Holloway, and received an explanation of Replenishment at Sea (RAS) by Navigator John Manley.

“It requires much coordination between us and the other ship,” he said.  “It is planned as to which course we are going on, how much fuel they want and which side of the ship to go.  We rendezvous, establish communications and it is run almost like a play; a series of events.  We line up the ships, turn the ship onto course and make sure our compasses are in line.

“The other ship waits off our quarter while we get ready on deck, then we use lights or flags to communicate and we tell them when we are ready.  We keep a steady course and speed.  Most small ships accelerate, so they do not get caught in our pressure waves in the stern, then they pull back and our rig will line up with their rig.  They then fire a gun line across to us. The end result is that a jack stay goes down at an angle from us to them and on that the hose sits in loops.  It is pulled towards the other ship.   It goes into a bell housing into the other ship and we have a probe on ours and as soon as it latches in, the one way valve opens and we are ready to pump.”

Before leaving, the ship’s football team, average age in the mid forties, played the Anguilla National Squad in a good natured match, which the visitors lost 12:1.  Francois, ‘Frank,’ Sornlouer, Wave Ruler’s Laundryman, joked, “The match was good; they would have thrashed us if they’d played properly!”   Guy St Hilaire, playing Left Back for the Anguillian team, said of the match, ‘It’s a fun thing.  The guys enjoyed it and although it was not much competition, it was an exhibition match.”

The ship departed for Montserrat leaving behind many new friends.

British-born Penny Legg has a regular column ‘Thoughts of an Expat’ in The Anguillian, www.anguillian.com.  She writes for magazines and newspapers in the Caribbean, US and UK.  She loves to take the photographs which accompany her work.  She is married with one son and currently lives on Anguilla.