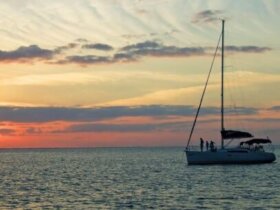 First-Timer’s Guide to the Bahamas

On Sunday, December 16, the U.S. FOL (Forward Operations Location), 429th Expeditionary Operations Squadron of the United States Air Force on Curacao, proudly initiated the first annual ‘Christmas Reef Cleanup’ in conjunction with local sponsors on the island. By spending a full day up and under the beautiful blue-green waters in between the Hilton Hotel and Hook’s Hut Beach Bar and Restaurant, fifty five men and women of the U.S. FOL, assisted by 25 local divers, protected the rich treasure of Curaҫao’s natural reef and preserved this fragile environment from damaging debris.

“We like to work within Curaҫao’s community to help protect the unique natural resources and underwater environment for generations to come. This ‘Christmas Reef Cleanup’ is the first in what we hope will become an annual event” said Lt. Col. Charles Olson, the 429th EOS commander. It was Olson’s idea and initiative to organize the event. Since the beginning of his contract in Curaҫao last July, Olson has regularly been diving at this particular spot, often accompanied by his wife and children.

“Every time I entered the water, I noticed a huge amount of rubbish on the ocean’s floor. That started irritating me so much that I felt the need to do something about it. I’m very glad that I got this huge response from my colleagues,” said Olson while dragging an old and soiled rug out of the water. Among the debris, gathered in a 20 ft container, were about three dozen tires, more rugs, many bottles, batteries, and unrecognizable pieces of junk. Nature research institute Carmabi provided a boat to bring all “treasures” ashore, assisted by the Curaҫao Marine Park manager Maureen Kuenen.

The U.S. Caribbean FOL in Curacao supports multinational aircraft operations that conduct detection, monitoring, and tracking missions supporting counter-drug efforts in the region. FOL Curaçao was formed after the closure of Howard Air Force Base in Panama in 1997 as a result of an agreement between the Netherlands Antilles, the Kingdom of the Netherlands, and the United States whereby aircraft and crews deploy to the FOL on a temporary basis to conduct mission operations.

The establishment of FOLs (also in Aruba; Manta, Ecuador; and Comalapa, El Salvador) within the source and transit zones is critical to the ability to implement the National Drug Control Strategy for the US.  FOL military and civilian personnel often volunteer their services in support of community projects and partner with local agencies in reaching out to the people of Curaçao.

In the reef clean-up project both locals and tourists can take advantage of the results of the work done in the future and, of course, Lt. Col. Olson and his family surely will enjoy their next dive at the spot.