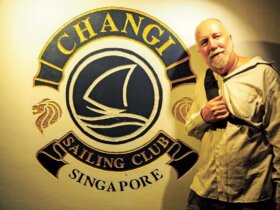 While undergoing a huge expansion program, the Panama Canal is currently in the worldwide spotlight. When the chance to cross the Canal on a cargo ship fell to my lot last September, I didn’t hesitate for a second and started preparing and gathering information at once.

The story of the current expansion can be read in All At Sea’s January 2008 issue, and Nedra Walker told our readers in the December issue about her experiences transiting the canal from the Atlantic to the Pacific on a 36 ft sailboat. (See www.allatsea.net for both articles.)  Transiting on a 300 ft cargo ship in the opposite direction is a different story!

I boarded MV Karla-Omayra, a training ship in full operation in a time charter under the Netherlands Antilles’ flag, in the Explosives Anchorage at the south side of the Canal in the Pacific. The ship was taking fuel, waiting for the crossing. While the crew was excited coming in sight of  land after 29 days at sea from Shanghai, I came in by American Airlines, destination Panama City. Although I just spent a couple of hours in the Manhattan-like center, I obtained the impression that I should spend more time in this town.  Maybe another time…Karla-Omayra was waiting for me.

A launch boat dropped me at the pilot ladder, leaving from Flamengo Island, one of the Amador islands in between the city and the Canal. Amador is one of Panama’s most scenic areas. It boasts awe-inspiring views of the Panama Canal, the bridge of the Americas, and the Bay of Panama with the impressive Panama City skyline, and the historic district of Casco Viejo. I reached Flamengo Island by the Amador Causeway, which was constructed with rock excavated from the canal a century ago.

The ship looked big as it loomed up out of the darkness, with her cargo towering high above the deck. Just a year ago, I stayed on board her for several weeks during dry dock. The picture I kept of Karla-Omayra was one of a ship somewhat smaller and thinner. How big the metamorphosis was on the outside, the interior didn’t change a bit and I immediately felt at home.

We were supposed to leave for the canal the next morning but we got a delay, which is not unusual. This time the cause was the annual Navy exercise, called “Panamax”, which brought 30+ Navy ships from many nations to the same spot, our spot. No problem for me. I enjoyed an all day long private boat show of navy ships supplemented with merchant ships that were, just like Karla-Omayra, asked for cooperation by means of the radio.

At the time we got the green light for the crossing, the sun set again and thousands of pelicans and vultures, considered a plague by the locals, flew by on their way to an overnight spot. At eight o’clock sharp, we passed the beautifully illuminated Bridge of the Americas. Carlos, our Panamanian pilot boarded the vessel in the Explosives Anchorage, moments before we left. I felt lucky being able to interview him. Carlos provided me with a lot of facts and figures in between his busy duties bringing our ship safely across the 50 mile isthmus.

Even though it was my third time in the canal, it again aroused my astonishment and respect. Many words have been written about the history and miserable circumstances of its construction—and many gave their lives in the effort, among them workers from Barbados, Guadeloupe, Martinique, St Kitts, St Vincent, Curacao, Jamaica, Trinidad, St Lucia and Grenada.

The history of the “big ditch” is also a saga of human ingenuity and courage: years of sacrifice, crushing defeat, and final victory. The whole story from the early days of the French construction period, to the completion by the United States and into the present time can be read on the Panama Canal Authority’s (ACP in Spanish) official website www.pancanal.com. The link www.pancanal.com/eng/history opens 12 chapters and 34 pages of the impressive story, all worth reading.

It was more than five years ago that I sailed in the reverse direction on the Dawn Princess, a more luxurious and bigger ship. If I had the choice once more, I would choose the cargo ship again. The experience of the crossing is so much more intense, the contacts with the ACP crew more direct, and the possibilities to sample information so much easier. There was one disadvantage this time: we sailed most of the transit by night so my sight was very limited and my intention of taking pictures of the expansion site an impossible mission.

Despite the darkness we didn’t miss a bit of the action in the locks. They were brightly illuminated so I could notice the new, shiny “mules” gliding along the lock side tracks, safely guiding us through: 26 m./85 ft. up and down again. Fascinating!

In between his duties, Carlos showed the new—classified, no pictures please—
software on his laptop, providing all information needed for the coordination of the crossing, which took us nine hours in total. We passed the three compartments-locks of Miraflores and Pedro Miguel before the eight mile stretch through the narrowest Culebra Cut part which was recently widened to allow ships to pass each other.

Culebra Cut leads to the south edge of Gatun Lake. The 163 square-mile artificial lake, almost the size of the island of Curacao, contains 183,000,000,000 ft&sup3; fresh water, used to raise and lower vessels in each set of locks by gravity. It’s an impressive sight seeing the water burst into the locks through the system of culverts that extend under the lock chambers from the sidewalls.

Our crossing took all night. The canal authorities allowed us to skip the waiting time in the Gatun Lake, providing a quite smooth transfer through the lake into the locks of the same name, marking the end of our passage. At 04:50 a.m., Carlos waved goodbye from his launch boat and only ten minutes later Karla-Omayra passed the breakwaters of Christobal, facing the Caribbean Sea where at that time Tropical Storm Felix developed into a category four hurricane.

Although we experienced rough seas, thunderstorms and a lot of rain, we stood the test and made it safely to Florida’s West Palm Beach. I wasn’t able to take photos of the expansion, the goal of this crossing, but my new experiences in the canal were worthwhile. Anyway, the progress on the expansion site can be observed on the Pancanal website, 24/7 as can all 13 to 14 thousand vessels every year passing through the Gatun- and Miraflores Locks.