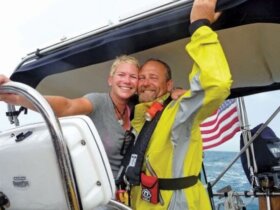 What is it Really Like in the Atlantic Rally for Cruisers

Ah, the red solo cup. That ubiquitous beverage holder, as seen at college parties and social events the southeast over. A container that manages to conceal its contents while simultaneously informing the world that said contents likely involves some form of alcohol. The boat driversâ€™ beer camouï¬‚age, the teenage concert-goers way out of getting stung with an underage. And a scourge on the environment.

There is a very funny sketch that John Stewart aired on the â€˜Daily Showâ€™ called â€˜The Stockholm Syndrome,â€™ that I highly recommend looking up. On the surface, the sketch mocks Swedenâ€™s socialist culture, but really itâ€™s an essay that looks in on America and pokes fun at our own ignorance. The best part comes when Wyatt Cenac, the sketchâ€™s host, visits Robyn, a world-renowned pop singer who lives in a modest apartment in the Swedish capital city. â€œIs that the biggest TV you have?â€ Cenac asks. â€œI only have that one actually,â€ she replies, to Cenacâ€™s chagrin. The camera pans to a number of paper bags underneath Robynâ€™s kitchen table. â€œAlright, so somebodyâ€™s been doing some shopping!â€ Cenac remarks. â€œAh, no,â€ Robyn replied, â€œitâ€™s my recycling station.â€ Cenac looks to the camera, exasperated. â€œAlright, this isnâ€™t *^&%-ing working.â€

I used to be part of the problem. A sleeve of those red cups lived in one of the lockers behind the portside settee cushion, right on top of a stack of paper plates, nice thick ones so that mayonnaise and salad dressing didnâ€™t seep through and get on your hands. We also kept a package of napkins close at hand, and when all the guys came down for our yearly sailing trips, weâ€™d bring along Styrofoam coffee cups and soup bowls with plastic spoons. The trash bags ï¬lled quickly, but nobody had to do any dishes. Once the big bags, doubled-up to prevent leaks, were taken ashore, they were quickly forgotten about. Not in our backyard.

And then I met my wife. The sleeve of red cups was not replenished; the paper napkins used and disposed of, never to be seen again. Likewise the paper plates. I started doing dishes. Each guest that came aboard was given their own real cup, and we started eating soup with real spoons. Coffee was served in â€˜boat-plasticâ€™ cups, the non-disposable kind with rubber around the bottom to serve as a nice non-stick grip on varnished surfaces. Likewise with wine. We got a boat-sized (read â€˜smallâ€™) compost bucket from the local hardware store, emptying its contents into the marinaâ€™s garden once a week. Our trash bag consumption fell suddenly and dramatically.

Bottled water became a thing of the past. Those Deer Park 12 oz. plastic bottles we bought by the case from Samâ€™s Club were replaced by reusable water bottles for each member of the crew. We clip them to the lifelines with those little mini karabiners, the kinds that have â€˜not for climbingâ€™ stamped on the side. They get reï¬lled from the Brita ï¬lter we have integrated into the onboard water tank, which we often top up with rainwater caught in a special canvas tarp we made that funnels the rain into a bucket placed on deck. The â€˜Capt. Green Jeansâ€™ moniker was a joke, my friends mocking me when I didnâ€™t act responsible, when I got lazy. As in, â€œhey Capt. Green Jeans, why donâ€™t you turn on some more lights next time.â€ Now itâ€™s a reminder to always think ï¬rst, then act.

In mocking Scandinaviaâ€™s culture of modesty, Stewart is really poking fun at Americaâ€™s culture of wastefulness and indiscretion. In his own way, Stewart, through humor, is trying to turn that around. Widespread change does not happen overnight; but it can aboard your boat. Use up the last of those picnic supplies and start drinking coffee from a real mug (it tastes better, trust me). Take ï¬ve minutes and do the dishes. Time spent washing up is time saved walking to the dumpster. Demand recycling at your local marina. Let go of the idea that itâ€™s someone elseâ€™s problem. Do something. Itâ€™s our problem. The tide is high, and itâ€™s rising fast. But Iâ€™m optimistic