The Importance of Celestial Navigation 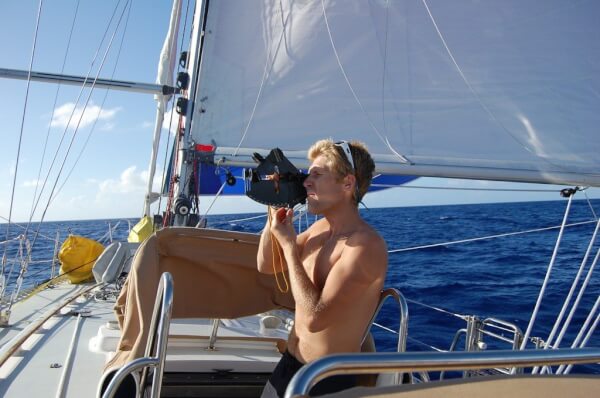 Arwen set sail from Dominica, after sunset but long before the half-moon would rise. The evening was exceptionally dark and Arwen was happy, romping along on a broad reach bound for St. Lucia. My team of high-schoolers guided her through the inky night, taking four-hour turns at the watch, steering by hand. They’d plotted a compass course, but that evening we’d be steering by the stars, for the Southern Cross shone low and bright on the horizon, and right ahead, leading us south.

We have a GPS aboard Arwen, but the kids don’t know that.

They’d be navigating the real way, using careful DR tracks, three-bearing fixes and the heavens. At the outset of our month-long cruise, I’d harped on real seamanship – they’d learn how to handle the 50-footer under sail alone, and only then would they be allowed the start the engine, useful as a luxury, but not a necessity. Just the same, they’d learn to navigate by wind and waves, landmarks and sun sights, and once they’d mastered this dying art, I might decide to show them the GPS – another luxury worth having but not required if one really understood what navigating was all about. You don’t need celestial navigation. But once mastered, you’ll wonder why you ever sailed without it.

As a beginner, celestial  was a black art, a mystery to me until I came upon a book by a Mr. Hewitt Schlereth, recommended to me by a sailor/writer acquaintance of mine, John Kretschmer.

Just as Stephen Hawking unlocked the mysteries of the heavens in his “The Universe in a Nutshell,” so does Schlereth in “Celestial in a Nutshell.” Schlereth lifts the fog of celestial, de-mystifying the art in surprisingly few pages.

The navigator’s most prized possession is his sextant, a work of art itself.

Kretschmer goes so far as to claim a good sextant is better than the best pickup line at a bar, and I’m not one to argue. One benefit of the ‘death’ of celestial in the GPS age is the amount of quality sextants available second-hand. I picked up a Japanese-built Tamaya sextant, a bronze model, for $275.00 at Sailorman in Ft. Lauderdale. The sextant was produced in 1978, older than me, but was maintained in its mahogany box and with a good cleaning, it is as good as new. In fact, during my introduction to celestial at one of John’s workshops in Florida, I practiced with an old sextant that had been ’round Cape Horn with him in 1984, the year I was born, and it performed wonderfully. The best-value new sextant is the Astra III-B model, costing less than $1000. Davis makes quality plastic models for much less.

The Nautical Almanac, once required on all sailing ships, is an absolute necessity for practicing celestial.

It’s published yearly, and contains information on the workings of the heavens. From the Almanac, the mystery begins to unfold, as you begin predicting the location of the sun and the stars by the season, the month, the day and the hour. You’ll need the Almanac to correct your sextant sights, and one can be picked up at most chandleries. I get mine each year from Bluewater Books in Ft. Lauderdale, who will ship anything anywhere.

Finally, the last pieces of the puzzle lay in the Sight Reduction Tables, a three-volume series produced by the US government, known as “Pub. HO 249.”

The first two volumes cover latitudes 0 degrees to 80 degrees latitude, and the last volume is titled “Selected Stars, for identifying the 57 navigational stars. The tables  take the advanced mathematics of the lost art out of the equation entirely, turning celestial into “child’s play,” as Bernard Moitessier once put it.

John Kretschmer believes celestial is making a comeback, as modern sailors  become disgruntled, shackled to technology. Like the ten teenagers aboard Arwen, bound ultimately for Trinidad, the true navigator is at once freed from the chains of the GPS, instead existing in the tangible world of sun and stars, wind and waves. With celestial, he is the magician and the GPS –  like the engine –  is a luxury.

Andy Schellhttp://59-north.com
Andy Schell is a professional sailor, writer and the event manager of the ARC Caribbean 1500. You can find him online at 59-north.com.
RELATED ARTICLES
Cruise