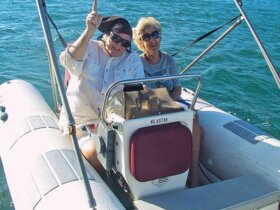 Having discussed the emergency functions of DSC in October’s All At Sea, I would like to expand on that this month.  Let’s start with DSC selective calling and polling. Recall that an MMSI # is no more than a boat’s “telephone number,” unique worldwide as discussed in part one.

As the requirement for ships to monitor VHF channel 16 fades into the sunset, the DSC feature will accelerate the list of items for boaters to be familiar with. If you want to call someone using DSC the general procedure is:

A group call is made similarly except that you create a “group” before the call is made. It then rings on each boat within the group and their VHFs switch to the channel you have selected.

An “All Ships” call will ring on all DSC-equipped VHFs within range. It sets the receiving radio to Ch 16 to allow communication of your reason for calling – i.e. this is basically just one step below a “Distress Call.”

All of these are distinct and in addition to using the Emergency DSC features we discussed in part one.

Making VHF calls this way removes one more piece of “clutter” from the normal hailing channel, a boon to fellow boaters. In fact, if all VHF calls were made this way, Channel 16 would become truly an uncluttered distress/emergency channel. It takes a readjustment in your thinking to do this, but once the MMSI numbers of your friends’ boats are input, it takes far less time than hailing on 16 and then moving to another channel. The ring tone is also hard to miss, where a call may be missed over the noise of engine, wind or stereo.

Another feature is the ability to “poll” (the ability to ask another DSC VHF to send you its position coordinates) another vessel’s location. It requires no action on the polled vessel other than the VHF being on, a GPS input and polling enabled. This can be used as a means of keeping track of another vessel’s location or to locate them and is very useful if the VHF is unattended due to an emergency condition. Search responders have up-to-date knowledge of your location without needing your attention. We find it is useful on our tender as whenever the VHF is on, we can poll it from Swan Song and know its location, a handy feature if is missing while we are towing it or perhaps just finding it “missing” one day.

A few of the latest handheld VHFs have DSC features with built-in GPS which can be a good way of keeping track or locating someone – useful if someone is overdue or perhaps you are worried about them for another reason.

DSC is also a feature on the GMDSS equipment that ships are required to have operational now. They are no longer required to maintain a watch on SSB 2182, nor are the USCG though both may for sometime. To my knowledge the ICOM 802 is the only recreational SSB at present that has this feature. It is operationally the same as the VHF DSC but has far greater range using the HF bands. This allows more vessels to be aware of any emergency condition that may occur.

As ships are no longer required to maintain a watch on VHF CH 16, how can we call them without their MMSI number?  This will be explained in part three of this series when we discuss Automatic Identification System, aka AIS.

Dave Cooper spent over 20 years designing & marketing computers, in the U.S. and Japan.  He sailed to the Caribbean in the mid 70s where he ran seasonal private charters throughout the islands for a decade, then worked in the yachting industry in the BVI until 2006. He retired on his classic trawler, Swan Song and cruises the southern Caribbean.