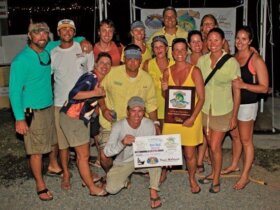 The Tournament comprised two days fishing with 66 anglers competing on 17 boats for cash and prizes. Hampered by rough waters, a total of only five fish were brought to scale including one Wahoo, three Dolphin and one Kingfish for a total of 112lb.